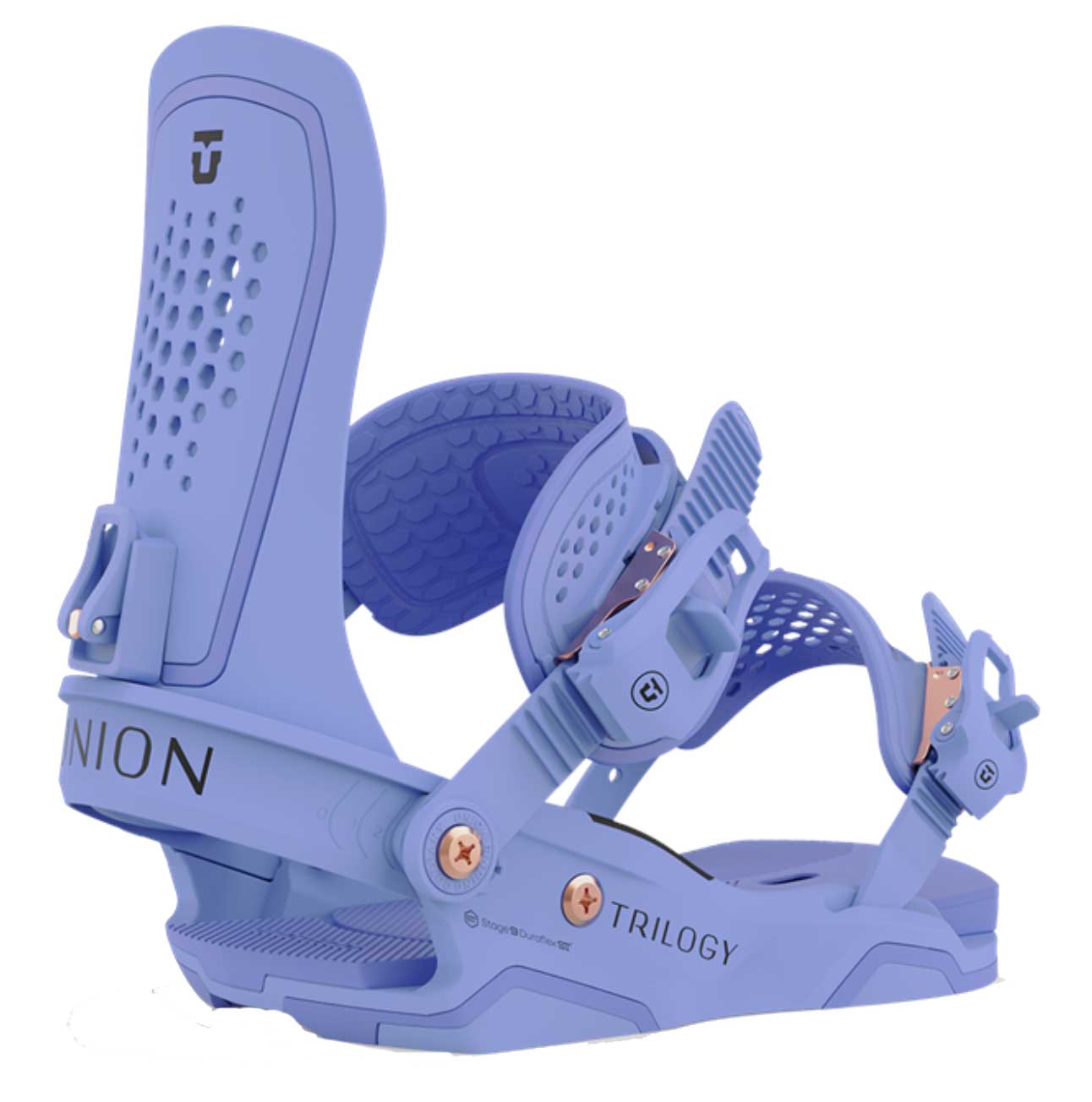 One thing that the 2020 Union Trilogy has that those past models don’t is a new washer system that holds the ankle straps, heel loop, and high-back in place without coming loose like it used to do. This addresses the biggest complaint that most had with Union bindings.

Conditions: All over the mountain, hard pack, bumpy, powder, park.

Union has other straps at C3 here in case you want to change it up.

The 2014 Union Trilogy has a few nice upgrades making it the call over the 2013.

So off to the review.

Flex: Much more going on in the high back. Before it had a softer older high back that was pretty old school.  The new high back is very much like the popular mens’ binding the Union Force.  It’s a little wider at the top and it allows you to get a little more leverage.  This is a nice upgrade.

Adjustability: Same Union binding that requires a tool for all of the adjustments except for the ankle strap. It’s also not easy to rotate the high backs and you can’t really adjust the ankle strap angle like it is with most bindings. There is one good thing about the binding and that is the ability to adjust the heel loop to your boot length.  They don’t have marks on the heel loop according to boot size which is good because a size 7 with one company usually has a different length on the outside than a size 7 with another company.  They just have Ruler type marks so you can size according to your boot.

Comfort: Pretty comfortable and if you have a good set of comfortable boots you shouldn’t have any pressure points.

Tip-Tail Response: There is a nice reduced dead spot under foot making pretty much the disc the main contact point so the board flexes better length wise with Union. You can get a nice butter after a carve.

Boot Support: The ankle strap is medium size so it gives you medium support so you have some room to move but you also have a little support going on the larger side of the ankle strap.  Also the toe strap is improved this year to make it hold your boot in better than the past models.

Ratchet System: Big improvement with the ratchet system in the toe.  It’s got a little lever like the ankle ratchet does now and it makes it less sticky when you take it off. Most complaints came from the toe strap so it was nice to see this fix.

Shock Absorption: Nice shock absorption and a nice binding to have under foot when you land badly or hit some shitty chunder.

If you ask me I wouldn’t even think about buying the 2013 Union Trilogy. The 2014 Union Trilogy is definitely the call and worth the extra money.

2013 and Below Union Legacy Review

They are also very light.   This is definitely a plug and play style binding.  If you can get past the little things like lack of adjustability around the ankle and high back then you will be very happy with the Trilogy.  If you need more adjustability and comfort then you will have to sacrifice response and go with the Burton Escapade.  Some of our riders really crank their straps down to the point of pain and they seem to have issues with all Union Bindings they try.  The straps seem to get stuck or loosen up a few notches.  If you don’t crank down your bindings then don’t worry about this. Unfortunately very little has changed from the 2011 model in 2012 except for the toe strap.  For 2013 the Trilogy is pretty much the same except for one good thing.  The ankle strap is a larger asymmetrical one similar to the men’s line.  This small change makes the 2013 Trilogy the call over the past bindings.  It’s more supportive and has a better all around ride to it.

Unions Toe straps can be a bit sticky and especially so for those that like to crank em down tight. For some this is a big problem and for others it’s not that big of a deal.

We try to get as many images of the Union Trilogy, but forgive us if they're not all there.