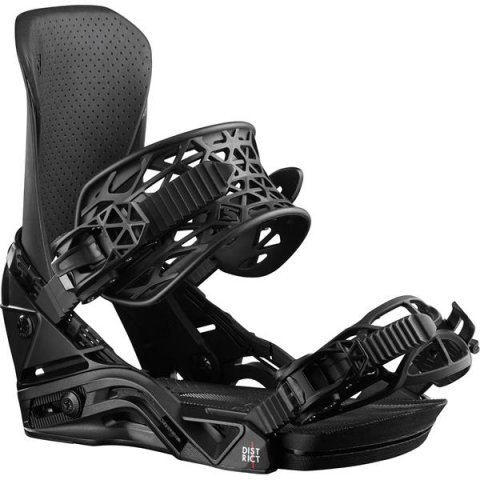 The Salomon District HPS is a binding we got about 1/2 day on but based on all our time on the regular District and using the straps that are on the highlander, we instantly got a snow broner for this binding. The District is still a great binding and a good second choice if you can’t find this though.

FYI- We were told by someone helping at the demo that this was the new District and not an additional release. We didn’t learn it was the HPS till we returned it to someone who actually knew Salomon’s line. That’s one of the problems we have at demos doing this a year ahead.

How This Review Happened:  We had a few laps at a frantic manic demo day.

About Shadow Tech: It’s been around for a while but it’s a soft heel loop that allows you to lean easy from tip to tail. It’s very weird but very functional.

Highback Flex: The high back of the Salomon District HPS is a little stiffer all around compared to the regular district and there is a little more energetic stiffness in the twist and when you pull it back.

Binding to Boot Adjustability: Same kind of adjustability you get from Salomon’s Shadow Tech. Really good strap adjustability that is quick and easy.  The highback rotation is tied to the forward lean so There is an adjustable gas pedal/toe ramp that allows most boots in the suggested size range line up on the gas pedal for a proper response but it doesn’t allow you to center your boot in the binding so you need to use the discs to center the boot/binding on board. If you are on the larger or smaller side of the suggested sizing range you will probably have to use the discs so you can’t turn them sideways.

Stance Width Adjustability: If you can center your boot in the binding you can turn the discs sideways and slide a bit between the inserts to dial out your stance.

Comfort: Incredibly comfortable and we like the ankle strap on the Salomon District HPS much better than the standard Defender. It makes it a little more comfortable in our humble opinion.

Boot Support: There is similar boot support with the Salomon District HPS but this has a little better strap. Salomon Shadow Tech gives you lots of support but still a ton of freedom of movement due to that soft heel loop. So you are supported well but you can still lean really easy to the tip/tail. It’s a really strong benefit of shadow tech.

Turn Initiation/Response: Very good response and a slight bump up from the regular district. The Salomon District HPS feels a bit below the Hologram though but it has the ability to pair up better with boards that need a little more turning power than the District.

Feel Under Foot/Buttering: The ability to lean over to the tip/tail really gives you easy leverage on the board so this is good binding to butter with. It is just a little bit behind some of our best but it’s amazing how much it can bend a board with a full-size disc and a pretty standard base plate for this day and age. The base plate, like all the other Shadow Tech Salomon bindings does a good job of not deadening the feel directly underfoot. It doesn’t enhance it either but it just allows the board to be the board.

Shock Absorption: The new base plate that came out in 2019 on the Defender is very similar or the same on the Salomon District HPS and we all like it a little better than the old one because of the extra shock absorption. The Canting works well for most too. It’s a pretty damp ride.

So the District is still a recommendable binding but since the Salomon District HPS is only $10 more buy this if you can find it.

We try to get as many images of the Salomon District HPS, but forgive us if they're not all there.