Negatives: There are 2 issues with this monopod here.  If they fixed them it would be hard to recommend another mono-pod unless it was free.

2. The neck piece has a little horizontal wobble that makes it a little more chattery when riding.

1. The best thing about the X-Shot Pro is the size when it’s compact at 7.5″ which is great for fitting in most jacket pockets.  Almost every other mono-pod that I used doesn’t fit in my jacket or pant pockets without it sticking out.

2. Also, it extends to about 31″ which is great for the size. It extends past other monopods that have a longer shaft and with most cameras you get most of you in the shot.  Also, it’s good for getting a closer shot of your friend. So despite the kind of loose extension pieces the X-Shot Pro is a huge improvement over the older model and will work well for those that like to film themselves and others on the mountain.

3.  Also, that rubber grip works really well with just about any glove and there is a long easy to get over the glove leash in case you stuck trying to go big on film.

4. The mounting system was greatly improved (despite the flaws mentioned above) and now it’s much more sturdy.  Before it was plastic and fell apart mid-season but now it’s metal.  It’s much better for taking off and on cameras all season

So, all in all, it’s not perfect and I was hoping to have a more stable filming platform.  However, nothing fits better in your pocket or extends as far for the size as the X-Shot Pro.  So it’s a tough call as to whether it will work for you or not.  If they can fix the 2 issues I mentioned I don’t think any other mono-pod could compete.

We try to get as many images of the X-Shot Pro, but forgive us if they're not all there. 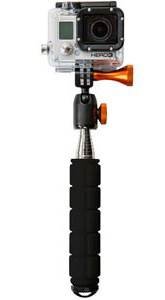