The Drift HD Ghost offers a similar look to the Drift HD but improves on its predecessor in almost every way.  The best part is the improvement in video quality.  It’s much better than the old Drift HD models.  There is also better battery life a bigger screen, a better remote and easier to push buttons. The Drift HD was water resistant but the Drift HD Ghost is waterproof.  This is a very versatile camera and a great choice for snowboarders. The only drawback is it’s heavier than most.

Update 2015: At the time this was a great option but these days it’s not quite the cam that the newer ones are.

Some Video from the Drift HD Ghost
Something happens to the quality when I upload the file to Vimeo. It looks good on the pc but once it’s sent to Vimeo it looks shitty so take the sample footage with a grain of salt until I can figure out how to upload it exactly as it was on the pc.

The new Drift HD Ghost has these changes/additions over the old Drift HD 1080p:

Mounting
There are more mounting options with what is in the box than there are with any other camera.  It’s also designed to mount to anything by just screwing in attachments to the universal screw mount where most require different screw mount attachments as well as mounts.  This makes carrying almost every mount you need for snowboarding much easier.  You can take the camera out with a goggle mount and a monopod and film from any angle imaginable.  Great job here.  In the box, it comes with 2 Helmet mounts and a goggle mount.  For $30 extra you can buy their retractable monopod which I highly suggest. Usually, you would also have to buy a

Weight
Feels heavier than most of the other cameras we have worked with and you have to make sure your goggles are tight so it doesn’t bounce. I’m ok with this because you have the best battery life out there. So it’s up to you to trade battery life for weight.  On the monopod, it doesn’t matter and the helmet mount isn’t bad either.  It’s mainly the goggle mount that suffers from the weight. The Contour +2 is a little heavier on the spec sheet but actually doesn’t feel as heavy on the goggle mount.

Ease of Use
The settings are easy to access and not terribly hard to dial out or access. This could be easier though.  It’s not as intuitive as you would think and once I accidentally deleted all the files on the card which sucked because it had the riders from the good ride demoing next years gear. That totally sucked because most of our riding videos were deleted. I mainly blame myself here but a small percentage goes to Drift for not being more intuitive.

Video Quality
So there was a major improvement over the Drift HD with the Drift HD Ghost. Apparently, Drift changed out the image processor and it makes for much better video. The Drift HD was a distant 3rd to the Contour and Go-Pro but now its a much closer and much more acceptable 3rd. The Go Pro HD Black is still in its own world but that comes with a cost too of very short battery life. The Go Pro HD Silver is arguably the best with the Contour a very close second and then the Drift HD Ghost a pretty close 3rd.  The biggest difference is the low light quality between the Drift and Contour/Go Pro. If you are out on a really dark powder day you will notice a difference in terms of quality but in cloudy, to bright light, it’s about the same.

One of the biggest complaints we have with all action cameras is their wide-angle lens makes even the steepest run on the mountain look like it’s an intermediate run. We aren’t saying that Drift doesn’t do that same thing but the runs are closer than they appear in real life compared to the Go Pro and about the same as the Contour when in the wide angle mode.  When you zoom all the way you get rid of a lot of that fisheye look and you get a better idea of the severity of the run you are on.  The Zoom on the Drift HD Ghost zooms in a lot more than the Drift HD but it doesn’t look as good.  It gets granulated.

The slow motion isn’t great compared to the Go Pro Hero Silver or Black but you can slow it down the same as you can with the Contour +2.  We don’t play around with this too much so it’s not an issue for us using drifts slo-mo but if you want super slow motion (half the speed of Drift and Contour) the Go Pro at does a much better job.

Drift Mono-pod
The mono-pod accessory is a must when snowboarding.  Once you get used to it’s a better way to film compared to a helmet mount. We found the Drift Mono-pod to be sturdy and a very stable video mount.  We’d like to see this extend out about twice as far so you can film more of yourself and follow your friends further away.  We’d also like to see a rubbery ultra grippy material where you grip this thing so you feel more confident with gloves on.  It has a little leash but that could be bigger as well so you can work with gloves.  We found this monopod to be the most sturdy and best to mount but the X-Shot Mono-pods easier to film yourself and others with. What makes this better than the others is the construction quality and the fact each pole twist locks into place when extended making it a much more stable ride.

We tried many aftermarket cases but ended up much more happy with the Drift Case Accessory.  It just holds everything very well and makes it very easy to organize all the essential mounting kits.  We’d love to see a few loops on the outside to carry the monopod and feel that would make this case practically perfect.

Conclusion
We at The Good Ride were looking for “the best snowboarding action camera” out there and to us, this one by just a little bit mainly because of its long battery life, built-in LCD screen and especially it’s well thought out mounting versatility. We liked this camera so much we chose this as our dedicated camera to film our days on the hill with.  If you are a skier or someone who only films from their helmet then it’s all about Contour. If you are all about best video quality and filming only from a monopod it’s hard to argue against the GoPro Hero3 Black or even the Silver.  If you want a camera primarily for snowboarding and filming from any angle any given hour then the Drift is the better call.

We try to get as many images of the Drift Innovation HD Ghost, but forgive us if they're not all there. 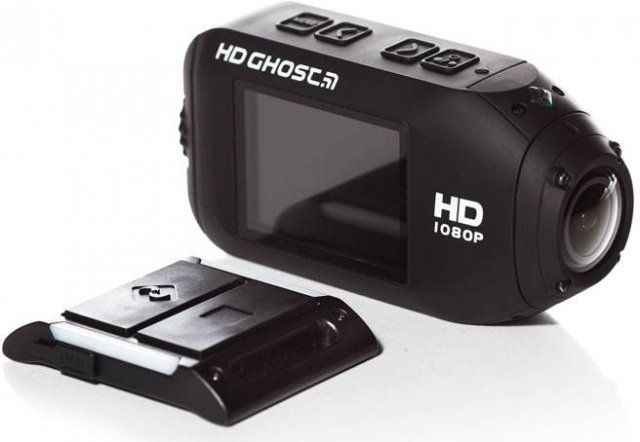