The DST snowboard from Telos is a fun inspiring freeride board that still allows you to ride switch when you want. It comes with a hybrid camber profile, set back, and taper. The DST likes to float in powder, play around, and carve some groomers. And it comes in a splitboard option!

The sizing and flex of the DST is a men’s flex and sizing. But this is a women’s perspective on the board since we know a lot of you ladies out there ride men’s boards too!

How This Review Happened: We borrowed this for an extended demo.
Size: 150
Days: 3

Would love at least one size smaller if this is going to be marketed as a “unisex” board.

Camber Profile: The DST from Telos comes with a hybrid camber profile. It has a mellow positive camber throughout the board, and a flat section between the feet. The camber seems more pronounced near the tail and less aggressive near the nose. There is also nose and tail rocker to help with float.

Flex/Pop/Buttering: The DST comes with a 6/10 flex. (It felt more like a 7 or 7.5/10 for me)  But I was riding a larger size. The flex feels like a nice mix between being stable and also maneuverable. It gives the DST a nice balance between feeling like an all mountain board and a freeride board. 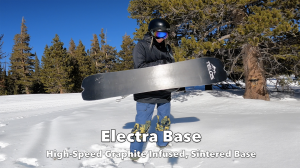 Speed: I felt like I could ride as fast as I wanted on the DST. But I also felt like this board preformed well at normal speeds too. It isn’t the type of freeride board that has to be ridden fast to enjoy it. I felt like it had a nice glide in the powder as well as different snow conditions.

Off Piste: I fully didn’t expect to be able to turn the DST quicklythrough tight spots and trees because it was bigger than the normal board I ride. But it surprised me and was plenty maneuverable off piste. It stayed stable and kept a constant feel no matter the snow condition I was riding in.

Edge Hold: I didn’t get it in super icy conditions. But I feel like the Telos DST would do fine in hard to icy snow. It won’t be as grippy as a board with some sidecut disruption, but should handle well in most all hard pack conditions.

Turning Experience/Carving: The DST felt quick to turn. Which also surprised me. It has a 250mm waist width and a medium-stiff flex. But it turned quickly. I felt like it liked skidded turns and carve turns alike. The turn radius was on the larger side, but I was able to get it from edge to edge quickly. 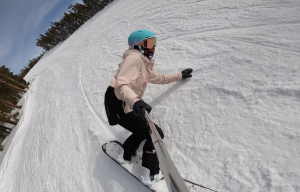 I enjoyed carving the DST a lot. It held a nice edge, and had that large radius turn that made it feel like it could carve forever. It wasn’t a super energetic carver, I got a medium amount of energy back from the board when carving. But it was fun to carve and had a nice consistent feel when carving. 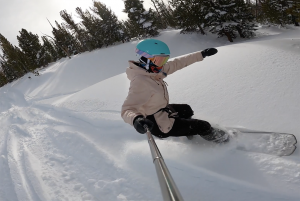 Powder: The DST was a lot of fun in powder. I love that it allows for switch riding if needed even in deep snow. It was maneuverable, and floated well with minimal effort. It has a good amount of setback on sidecut (20mm), and 4mm of taper in the 150 size. The slight indentations on the tip and tail also aid in helping the tail to sink into the snow a bit for better control in deeper snow. (when riding switch or regular)

Steeps: I liked the DST on steeps. It turned well and was still fast to engage the edge. It however still liked a slightly larger turn radius even on steeps.

Park/Freestyle/Switch: The unique thing about the DST is that it is a directional freeride board that allows you to ride switch. This was awesome for my style of riding. I try to ride switch as much as I can. It isn’t made to shred the park, but was fun to ollie off natural features and throw spins every now and then. It was a fun board to get creative on and look for those natural hits on a powder day.

Overall / Who Is This For?

I feel like the Telos DST could fit a wider variety of rider types. It doesn’t have a difficult learning curve so I feel like an intermediate rider could have fun on the DST. It could be a good intro to freeride board for someone. Or could fit well for a more established rider looking for a semi-playful consistent feeling freeride board. It was a nice fit for someone like me, who likes to ride switch even on powder days.

We try to get as many images of the Telos DST, but forgive us if they're not all there.