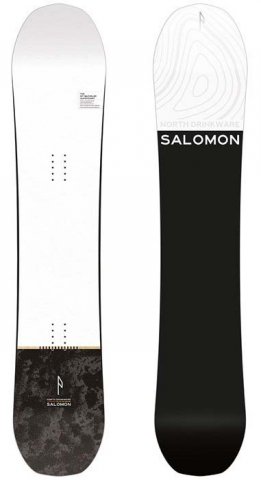 The Salomon Super 8 is a pretty affordable carving machine that is also somewhat capable when it comes to floating in the deep stuff.  It’s not a perfect all-around freeride board but if you live to make really good turns on groomers the Super 8 will really shine for you.

Flex/Buttering: The flex of the Salomon Super 8 is not mellow but it isn’t super stiff for what it is.  It is medium bordering on med/stiff.  Not really a buttering board.

Sizing: The 157 felt just right for us despite its wider waist than the Speedway 160 for us.

On Snow Feel: The Salomon Super 8 has a very camber like feel underfoot.  The camber transitions to flat but the flat is still off the snow so it only lessens the angle at which the board points down back into the snow.  So this is almost all camber.  It feels pretty locked in and not for the rider looking for a forgiving ride.

Edge Hold: Pretty good edge hold and it can hang in some hard snow.

Turn Initiation: Here is an interesting thing.  We felt the Super 8 157, with its 26cm waist, turned as fast or faster edge to edge than the Speedway 160 with a 25.2cm waist. Usually, a size 8.5 and 9 boot doesn’t power board like this as fast as we did.  It wasn’t fast or anything but it was very doable for how wide it was.

Turning Experience: Super fun to turn and although we thought the Speedway was a little more fun to turn it’s hard to find better at this price point.

Carving: Carves very hard and we had a good time laying that edge over onto the snow.

Skidded Turns:  Feels pretty camberish and not for someone who gets off their game a lot and needs to skid their turns.

Speed: Very fast for this price point and you can bomb with the Salomon Super 8 for sure.

Uneven Terrain: Very doable and this seems to better than many Salomon boards in uneven snow or hard groomers with small bumps.

Powder: Not a real floater.  It is better than camber but not really an amazing floater.  It usually won’t send you cartwheeling but it will take a bit more work than most hybrid shapes on the back leg.

Switch:  Doable but not ideal in relation to many double enders.

Jumps: There is good pop off the tail and the Salomon Super 8 feels like it can handle a lot of air.

Jibbing: not a jibber.

Pipe:  We didn’t take this in the pipe but it felt like it could do well enough.

So if you are on a budget and want a board that can carve/turn really well then the Salomon Super 8 is a good call.

The Salomon Super 8 is the continuation of the Reserve and Rancho but with a little more of a double ender feel to it.  The new less directional shape makes the board a little more of a one board quiver for mainly directional freeriders who occasionally ride switch.  It’s a very good board for the price and reminds us a little of the old Burner. The 2017 Super 8 did not change much from the 2016 model so our previous review still stands.

So there aren’t many good freeride boards out there that are in this price range.  Usually it’s a board that is really lacking but the Salomon Super 8 can hang with and in some places even outperform a lot of our favorites in the higher price range.

Flex: Really good flex that isn’t too stiff but sit’s more in the middle. Most boards like this are med/stiff to stiff.  The Salomon Super 8 isn’t though but still has a rubbery damp feel to it.

On Snow Feel: It’s cheaper but not an entry level board.  There is some old school Freeride catch to it.  It’s not as bad as the old camber boards but it requires you to turn correctly and be on your game.  It’s got a damp personality that doesn’t match it’s flex which is pretty fun and it’s a fun snappy turner that doesn’t seem as wide as it should be for the waist width.

Edge Hold: Pretty good edge hold and it can hang in harder snow.  It doesn’t excel but it can work there.  It’s more on the bottom end of the hard snow spectrum.

Turn Initiation: So for a mid/wide waist it turns pretty easy and it isn’t any where near as challenging as I thought it would be for this width.  No problem in the trees and it turned quick from edge to edge.

Skidded Turns:  Not a board that you want to get off your game with too much but it was better than a true camber board.

Carving:  The Salomon Super 8 rails out turns pretty well and it’s a fun carver.  Especially in soft snow. It’s the kind of board that we would like to spend all day carving with and it allows you to really lean over.

Speed: With this flex you would think it wouldn’t be as damp but just like the old late model Burners its got more speed than you would think. It’s got a very rubbery feel to it that makes the ride a lot of fun to point it and a nice stable platform.

Uneven Terrain: The medium flex and rubbery damp tech inside makes for this to be a very easy ride when the resort get’s messy.  We had no problem weaving in and out of messy snow, going over chunder or even powering through messy mid day resort snow on the way back to the chair.  Well done here.

Powder: It’s a pretty easy ride and even though there is a -15mm set back on effective edge there is more than that on board.  It’s camber to flat profile isn’t as easy floating as the boards that have rocker but its not a slouch by any means.

Switch:  Better switch than you would think and it’s got a touch of all mountain feel to it.  It’s a tapered directional board so don’t think it’s going to be easy but it’s something you can do better with than many freeride boards.

Jibbing: I wouldn’t but if you did it’s got a softer flex that will make it better than you would think.

Pipe: Normally Peter and I (smaller boots than Jimbo) wouldn’t be stoked on taking a board this wide into the pipe but we would do it with the Super 8.  It felt quick enough to not feel cumbersome.

Jumps: It’s got a rubbery feel but it does snap well off the tail and we all felt it was really fun to get some air with.  It’s one of the better boards for directional air and it’s only real weakness is landing switch even though it’s still doable.

So all in all you get a really poppy carvy damp board that can handle all kinds of resort snow.  When we first rode this we would of said $549 and we were really surprised to see that it’s actually $449.  It might get slightly edged out by more expensive boards but man it’s still got a lot of great things going for it.

We try to get as many images of the Salomon Super 8, but forgive us if they're not all there.