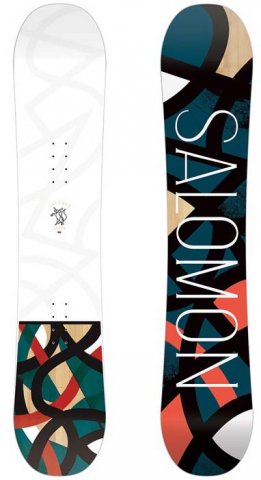 The Salomon Lotus gives you a lot for the money and there aren’t many viable choices in this price range.  We like that this is a directional twin.  That means the shape is identical except the tail is stiffer than the nose.  A Twin shape with a little set back from the center is great because they are easier to turn and allow you to learn just about anywhere on the mountain.  The most important thing with beginner riders is not catching an edge and the Lotus will help you there because they have a flat camber shape.

The Base is not great and they don’t say whether it is sintered or extruded.  We are going to guess that it’s extruded which is good for a beginner but as you progress you will want a better base.  Either way, it is at least sturdy and easy to repair.

This isn’t a bad choice for those who don’t want to rent or want to get out of the beginner realm.

The big difference between2010 and 2011 is the change from camber to flat camber.  This makes the board more catch free and easier to float in powder but sacrifices pop to do so.  For a beginner, this tech change is definitely worth it. If the Lotus gets you into snowboarding it will end up on the shelf but it’s one of the better boards out there in this price range.

We try to get as many images of the Salomon Lotus, but forgive us if they're not all there.