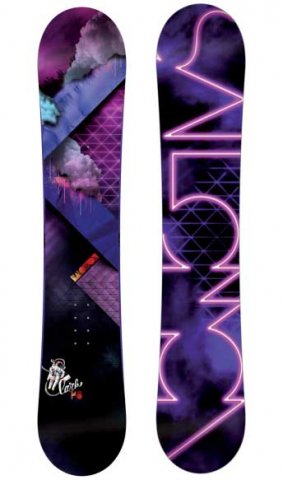 The Salomon Lark is a fun relatively easy turning freeride specialist. It has a tapered shape, decent edge hold and is good in powder.  It actually has an extruded base and that is very disappointing for a board of this caliber.  Aside from this complaint we still feel this is a good board for someone looking to hone their freeride riding skills.

This is a direct competitor to the Burton Feather but has a 4 hole binding set up and isn’t continuous rocker. If you throw in an aggressive pair of bindings with the Lark you will have a really fun easy to turn all mountain to freeride board that won’t be too tough on you.  For 2012 Salomon added their mostly camber hybrid camber profile to make this board float better in powder which makes 2012 the call. The Lark is a good low cost mostly mountain to freeride board

On Snow Feel: This is a little catchy but not as catchy as you think.  It’s not a bad board an aspiring freerider to learn on. Most freeride boards have some consequence to them so it’s not a bad idea to learn on one that’s like a mellow version of the more advanced to expert boards.

Powder: The Salomon Lark also performs very well in powder.  It has a big setback and a decent enough taper to float very well even though it’s cambered. You are not going to feel the speed that you will on groomers but you feel the board keep its momentum.  We also noticed that this had a similarly wide and long nose as a powder board.  The lark was easy to manipulate through patches of trees and in tight situations.   We like the 2012 addition of a hybrid camber profile to give it a little more float in powder.

Turn Initiation– When it comes to turn initiation the new tech is far better.  We don’t quite understand it but it makes the Lark incredibly softer and easier to turn at low speeds.  The Lark is also very easy to turn in tight situations like trees or steep chutes.  This is good because the board gets going soo fast you need to turn.  There was one turn the editor made where he dropped his hand to touch the ground on a high-speed carve and the snow took off the silicone on the fingers!

Speed: Pretty good at speed and it performs well for the price.

Uneven Terrain: Normally as the day progresses the conditions get chopped up and many older Salomon boards would get angry. It’s hard on your body.  The new Salomon Lark handled chopped up crappy runs better than the old Larks. It’s still not perfect but it’s much better.

Approximate Weight– Pretty light but not a top of the class kind of ride.

Edge Hold: Like all tapered boards they don’t have the best edge hold when it comes to hard pack conditions but out of all of the similar boards we tried it did very well.

Flex–  The newer Lark from 2009-2010 on really softened up.  We would say it used to be a 4 out of 5 but now it’s closer to a 3 or maybe even less.  What is weird about this change is the Lark didn’t lose any speed or dampening.

Jumps: Not very good in the park but great for a method off a natural hit.

The rest of these categories are not really applicable for the Salomon Lark.  This is a mostly mountain to freeride type of board and if you take this on a rail we’ll come to your house and take it away from you.

We try to get as many images of the Salomon Lark, but forgive us if they're not all there.