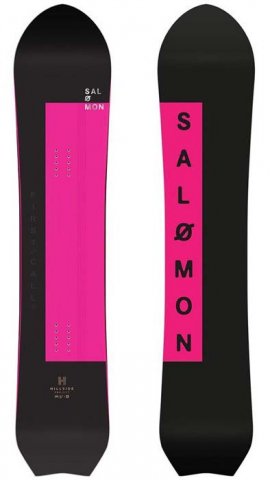 The Salomon First Call is basically a budget version of the Salomon Sickstick.  It’s got a lot of personalities underfoot that we had a great time with. We would like to get to know it better, geek on the specs more and ride it in some deep stuff. Of the two the SickStick was the better board but not sure if it was $200 better.  So if you are on a budget this was one of the better mostly directional mountain rides we came across and it’s often on the recommendation list for the many that email for advice.

On Snow Feel: Stable, lively and fun.  Not quite as lively underfoot as the SickStick but pretty close.  It feels a bit surfy but it also feels like a good daily diver for those mostly directional riders out there.  They want an all mountain feel in a more directional shape.

Edge Hold: Both boards gripped really well.  They didn’t hold quite like the Salomon Assasin but were in a similar ballpark and are fine for firm snow riding.  Not an ice specialist though.

Turning Experience: Really fun board for those that like to go out and make all kinds of turns. It really has a good spring edge to edge when engaged in a turn.

Carving: It’s not a super carver but man the Salomon First call can really lay into it if the mood strikes.

Speed: The SickStick had the advantage there but only by a little bit.  It can still bomb and make high speed turns well.

Uneven Terrain: This is where we preferred the Salomon First Call over the Sick Stick and it seems like a champ for dealing with messy resort snow you often see on the weekend.

Powder:  No powder to speak of.  So even though it has a centered stance on sidecut it seems like there is some setback on board so it might have more directional float than you would think by just looking at the specs.

Buttering: Buttering was very doable but not super easy.

Switch:  Again it’s very doable and especially so for a directional board with 10mm of taper. You would think it’s not that much taper.

Jumps: Good pop.  Not as snappy as the Sickstick but for $200 less we could probably live with this.

Pipe: I didn’t ride the pipe with this but would like to give it a try

We try to get as many images of the Salomon First Call, but forgive us if they're not all there.