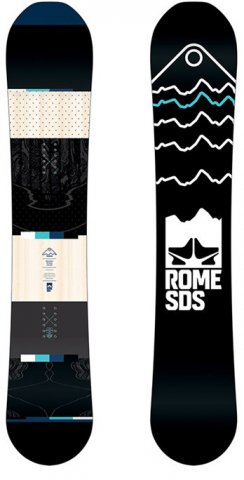 The Rome Mountain Division is a directional hybrid camber board with a centered stance. It’s got a very Freeride feel but with a strong Aggressive All Mountain Aftertaste. It’s a unique ride that isn’t quite for everyone but some might like this different take on freeride/directional riding.

How This Review Happened:  We borrowed this for an extended demo and then returned it.  We borrowed this for a day and then returned it. We had a couple of laps at a frantic manic demo day so take it with a grain of salt. We liked it so much we asked to keep it (we only do this with our favorites).  After a demo, we liked it so much we bought it.  We spent our precious Good Ride dollars to buy this and review it.

Approximate Weight: Felt light even with the heavy Katana’s on there and lighter with the Cartels.

On Snow Feel: Felt like it was a camber board of old and the flat to rocker in the tip/tail is more on the minimal side.  It’s fast, stable and carvy but it’s also on the catchy side.  Even though we reference this as hybrid camber it’s more like what we call mostly camber.

Powder:  No powder but you can tell it will do well. It won’t be that super effortless floater compared to boards with more rocker in the nose but I bet it has some of that fun powder pop that the old Rome Notch had that I owned and loved.  Even though it’s centered on the sidecut there is some set back on board and it will give you more directional float than the specs would lead you to believe.  I personally liked the older Rome S-Rocker profiles that had more rocker in the nose to the newer camber to flat to a little bit of rocker. That being said if you like how full camber rides you might like this more than I did.  It’s going to float better than camber but not really float like many freeride boards we tried out there with more rocker in the nose.

Turn Initiation:  Even with the wider waist of 25.5 cm, which is on the wide side for size 8.5 and 9 for Peter and me, the Mtn Division turned better than we thought it would.  It took a little work for us to get it to commit to an edge but when it did it had spring out of it.

Skidded Turns: Not the easiest to skid turns and not really a board to for the entry-level or even intermediate rider.

Carving:  That slightly wider waist width gave Peter and I all the edge we needed without any toe/heel drag so we could really lay into a carve for a 155. Also, all that camber really pops you out of the carve and set’s you up for the next turn. If you like to carve this should please you.

Speed: Fast for a 155 and if we were on a 159 which was probably a better fit I bet it would have been up there with the old Rome Anthem.

Uneven Terrain: Its flex is forgiving enough in uneven snow but the slower turn initiation (for Peter and me) was not ideal to weave in and out of uneven snow.  If you have larger feet like size 10’s this might be a little easier but it still didn’t feel like our first choice for mid to end of the day snow.  It’s more at home in groomed snow.

Edge Hold: It gripped very well in the few patches of hard snow we had but in soft snow, it wasn’t overly grippy.

Flex:  Feels like most freeride boards these days.  It’s a snappy medium/stiff flex.

Pipe: Nope didn’t go there but don’t think I would like it that much as I generally like quicker turning board there.  Still, it would probably drive wall to wall well.

Jumps: It’s not something that you want to lap the jump line with but it’s got great pop off the tail for an ollie and will be a great board to send it on the mountain.

So even with this mostly camber profile, it’s got an old school feel that isn’t for everyone but those that still prefer the old days of camber might like this board.

We try to get as many images of the Rome Mountain Division, but forgive us if they're not all there.