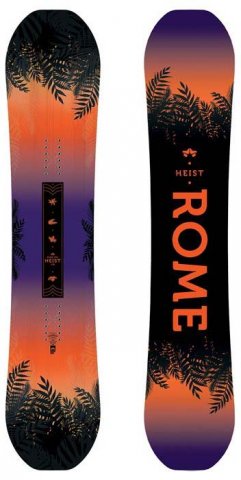 The 2016 Rome Heist really changed up the ride compared to the 15 and 14 models.  It’s now cambered between the tip/tail with a passive rocker that doesn’t touch the ground in the middle.  It takes it from a very forgiving ride good for a wide variety of riders to make it a very aggressive super poppy freestyle ride for those who know what they are doing.  It’s not a board to skid your turns with anymore.

On Snow Feel:  Went from semi lose to catchy like an old camber board.  For many, it’s almost too much camber. It’s not the spinney forgiving board it used to be.

Powder: Lost all its float going to camber and it will only ride slightly better than old school camber in powder.

Turn Initiation: Quick and snappy if you know how to turn.

Skidded Turns: Not easy to skid turns and you could easily catch an edge.

Carving: Massive improvement over the older model and it really lays it out well. If it was a little stiffer this would be top notch.

Speed: Kind of chattery on the mountain.

Uneven Terrain: Not bad as the day starts to get messy.

Edge Hold: Really strong grip that will work fine in anything from ice to slush.

Flex: Still a soft flex that’s easy to butter but it just requires a more technical rider to not catch an edge.

Jibbing: Not a bad jibber but you have to know what you are doing now.

Pipe: Some might want a little stiffer flex but it will do really well for most in the pipe that know how to ride it.

The Rome Heist is new for 2014 and a great addition for the women’s freestyle rider on a budget.

On Snow Feel: There is a lot of rocker going on between the feet and although there is a good bit of camber going on at the tip/tial it’s still pretty loose between the feet when one footing and flat basing.  Until you put the board on edge it feels similar to a continuous rocker board. It’s all about a loose playful ride that loves to pop and spin.

Powder:  This is great for a twin in powder and will float well for those that like it centered and ride switch a lot in powder.

Turn Initiation and Carving: Very easy and quick edge to edge. Short to medium turns are easy and fun. As you get to wider radius turns the quick rip side cut’s outer side cut engages and it provides a different turning feel more like a camber dominant board.  Now with such a loose playful board you wouldn’t think it would carve well at all but its a lot better than you would think. As the outer part of the side cut engages it’s a lot of fun and it allows the camber in the tip and tail help you get a little spring out of the turn. It’s still not perfect and a little bit washy in harder conditions but it’s pretty good for a freestyle twin.

Speed: Pretty chattery and not ideal for bombing a long sustained steep run but it’s fine for a straight line needed for a big kicker.

Uneven Terrain: It’s soft flexy ride is very forgiving when dealing with slow speed bumpy terrain. It’s not a chunder buster but it moves over bumps like water over rock.  It’s chattery but doesn’t pass the bumps up to your knees and legs.

Flex:  Pretty medium soft but with that extra rocker between the feet makes the board feel even more buttery and playful than you would think by flexing it in a shop.

Jibbing:  It’s very forgiving and playful and easy for most riders to play around on rails and bonks.  It’s rocker between the feet keeps it from being perfect because it could be better if there was more flat between the feet to hold the but it’s still easy and forgiving.

Pipe:  There is enough edge hold and the board drives pretty well from wall to wall but it’s a little too loose between the feet to give you that stable drive on an icy pipe wall. Still it’s much better than you would think.

Jumps:   What a poppy playful fun little ride for those that like to jump. It’s really fun hitting small to medium kickers but also isn’t bad on a bigger kicker as well. It pops well on an ollie and spins well on kickers.

All in all this a solid choice for anyone on a budget that want’s a do everything park ride.

We try to get as many images of the Rome Heist, but forgive us if they're not all there.