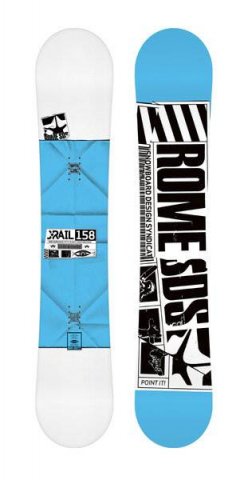 For 2012 the Crail added the hybrid camber tech that is in the Rome Headline which improves performance in powder a bit.  It’s still not like a board with a lot of rocker in the nose but it’s better than the old camber model.

They also added the “Quickrip” Side Cut which makes for an excellent edge hold and carving.  It really improves the ride over the 2010 and 2011 models.

The Rome Crail is perfect for anyone who wants to get their edge to edge transitioning down and begin the road to understanding an aggressive approach to every aspect of all mountain riding.

It’s also a great entry level freeride board that will help you learn how to correctly carve out a good turn.

Even though the Crail has a shape of the Anthem and Headline it has a softer flex so it makes for a more versatile directional board.  It’s not going to have the speed or stiffer dynamic feel of the Headline but it will be easier to turn and more forgiving.

All in all it’s a good ride favorite for those who want to get into the mostly mountain riding game at a low price.

The 2010/2011 Rome Crail is a solid camber board that can be used just about anywhere.  This is one of our favorite directional all mountain camber boards in this price range.

We try to get as many images of the Rome Crail, but forgive us if they're not all there.

Best snowboard I have ever ridden . I got it brand new in 2009 and I snapped 2 Libs both the first day i road them this board keeps on ripping

Rome Crail Review And Buying Advice
Feb 08, 2022 by Tamas
Ability Level: I’m an amateur was on flow from a couple board shops mainly like to jib and spin •
Riding Style: Burnside skater style .ride it like I stole it •
Days You Ride A Year: About 30 to 40 •
Height, Weight And Boot Size (for Boards, Boots & Bindings): Weight 175 when I’m pushing weight . Size 8.5 boats ride burton bindings

This board helped me go from a very confident beginner/intermediate rider to an intermediate/advanced rider over a relatively short time (3 x 15 day trips in Europe). Maybe my competitive surfing background also helped, but nonetheless, I find the Crail to be very forgiving, goes well in all conditions and has allowed me to improve my carving abilities with confidence. Used a ski app on our last trip and my speed is usually between 55-65kmh (highest recorded 75), which might seem slow to many, but my focus is all mountain "surfing", no parks, hardly any switch, etc. even though I feel it's time to upgrade, I'd highly recommend this board to anyone on a tight budget or a beginner/intermediate who wants to progress.

product 0.3
5.0 5.0 2 2 I can’t believe this Rome crail got the reviews it got like it’s for a beginners. I thought it had a lot of pop and when I’m ridding around with pros with brand new capita’ Rome Crail Review And Buying Advice