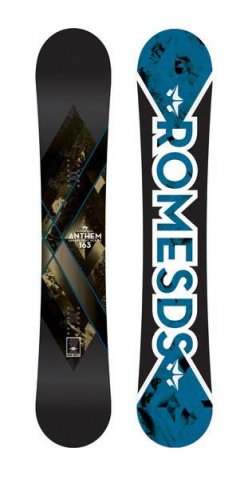 The Rome Anthem SS is a very fast, stiff aggressive board made mainly for expert mountain riders. This a mostly camber hybrid camber that is stiffer and more aggressive than the Rome Anthem.  To us, it was too stiff/unforgiving and we preferred the Anthem but a rider that likes the most aggressive all mountain board you can find might like this.

The Rome Anthem SS is very similar to the Rome Anthem except it’s a little stiffer and more aggressive.  This board isn’t for everyone.  We’d say it’s barely for advanced riders and mostly for expert riders.

On Snow Feel: The Rome Anthem SS is made for high-speed groomer assaults and it’s a perfect morning groomer board.

Powder: The Anthem SS has a great set back and comes in a decent size so it performs well in powder for a mostly camber directional board. It’s a little better than the Anthem but still doesn’t compare to a hybrid rocker or mostly rocker hybrid camber.

Turn Initiation. The Rome Anthem SS is similar to the Anthem but just a little more difficult to turn.  If you are an aggressive expert rider then you will like the way the Anthem SS initiates the turn. It’s not easy and if you are wondering if the Anthem SS is too aggressive then don’t go for it.  You’d probably be happier with the Anthem. Still, this is a very fun board to turn and carve if you are the right kind of rider.

Speed: The Rome Anthem SS is a bomber.  It can handle speed as well as almost any board out there.  It’s going to be a good board for straight lining or carving out a very high-speed turn.

Uneven Snow- It’s not as good as the Anthem is at dealing with chopped up or rutted groomers and it’s not fun after the morning groomers. It seems to be like a car with racing shocks on.  The minute you get off the track (groomers) it sucks to drive.

Approximate Weight– The Anthem SS is very light and one of if not the lightest ounce for ounce boards in their line.

Edge Hold: The Rome Anthem SS has excellent edge hold but it’s not because of any extensions in the edge.  It’s just stiff and has sharp edges.

Flex:  It’s pretty stiff and feels a bit more than the Anthem when it comes to all around flex.

Switch: Definitely different riding switch but not terrible.  Riding switch feels pretty stable though and after a while, you will get used to the directional shape.  So it’s not that terrible for the shape. It’s just like the Anthem here.

Jibbing– Don’t even bother. We didn’t.

Pipe: If you like a stiff pipe board this will be to your liking but it’s not terribly forgiving.

Jumps: The directional shape doesn’t make this the best to land or launch switch.

Overall we felt the Anthem fit a wider audience of riders than the Anthem SS.  Some might like this but I’d recommend the Anthem 10 times out of 11.

We try to get as many images of the Rome Anthem SS, but forgive us if they're not all there.