Turn Ons/Swipe Right: Almost as fast as the Commissioner for those that want to bomb at a cheaper price.
Turn Offs/Swipe Left: Not a turny board.

The Ride Smokescreen is a lower priced version of the Commissioner for those that want to straight-line most of the time. 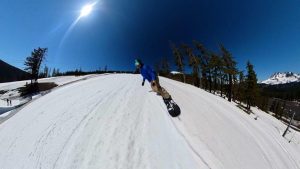 Every day I rode the Smokescreen I also rode it against the Commissioner with the same boots and bingings.

The Ride Smokescreen is pretty normal when it comes to weight. The Commissioner is a little lighter but it’s closer than you would think for the price difference. (We don’t put in the exact weight because with wood cores there is no consistency in a boards weight)

So I felt like all I needed was the 158 for what I want to do but If I wanted balls out speed at the cost of easier turn initiation I could go 162.

The Ride Smokescreen has a somewhat typical Freeride shape with 10mm of taper and some early rise in the nose/tail. It makes for a more forgiving ride than you would think for it’s damp/bomber flex. You also don’t need too much back foot weight to keep the tail from washing like you do with most tapered directional boards but you do need more than a double ender like the Wild Life.

Very stiff between the feet. It’s almost inflexible. The nose of the Ride Smokescreen has a mellower nose flex but it’s still pretty stiff. The tail is a little stiffer than the nose but overall it’s a very stiff board. Weirdly enough I can butter on the tail a little bit where it wasn’t easy with the Commissioner. This overall flex personality translates to being a better all day ride than the Commissioner but still not something that is easy like most ride boards when it’s messy. Great for powering over uneven snow at higher speeds though.

The Ride Smokescreen is a bomber no doubt. It’s not quite there base glid wise or dampness wise as the Commish but it’s close.

Forgot to mention this in the vid but the edge hold is fine in medium snow and it grips pretty well in harder snow. It is great for those that don’t like disrupted sidecuts but still want some edge hold.

So the Ride Smokescreen is really for bombing and it doesn’t turn well across the groomers and I couldn’t get it to make a decent circle carve. It does initiate a turn quickly but once you get the sidecut engaged not much happens from there. It’s all about the straight line very shallow radius direction changes.

I didn’t get any pow with the Ride Smokescreen. I would say that with this taper, -2.875” setback all the way at a 22.75” stance width and its bigger nose than tail this should float like most traditional freeride boards. So not amazing but far from being a slouch.

So if you want a more affordable straightliner than the Commissioner and most boards out there in this peer group the Ride Smokescreen could for sure work. It is a pretty good all conditions straight liner.

We try to get as many images of the Ride Smokescreen, but forgive us if they're not all there.