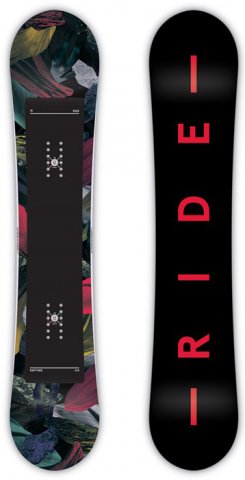 The Ride Rapture is pretty fun just about anywhere in the park and is a good starter board. This board isn’t going to blow minds but it beats renting. It will also take you well into the intermediate to the advanced world before you want more from a board. The Ride Rapture isn’t a bad groomer board for a twin. The Low Rize rocker is flat in the middle with a slight rocker up a little after the bindings. The Rapture is still flat past the bindings and then kicks up a little before a normal snowboard would.  This makes for a very stable easy ride without a lot less consequence than the old camber rides. The Rapture has some pretty good hand me down tech for the price.  For 2012 the Rapture changed very little from 2011.  It had a big makeover in 2011 so that is expected. For 2013 it’s still pretty much the same design. 2014 is pretty similar to 2013 and the board is still a very easy but stable all mountain freestyle ride.

We try to get as many images of the Ride Rapture, but forgive us if they're not all there.