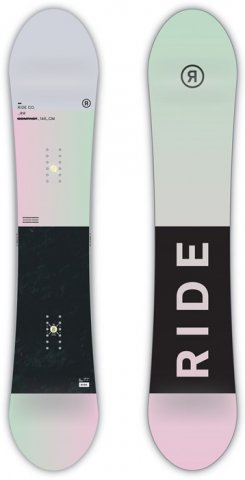 The Ride Compact is a twin that can play in a freestyle way anywhere on the mountain.  It has a solid stable feel between the feet even though the Compact has flex on the softer side of medium.  There is flat between the binding inserts and then a mellow rocker after. If you had issues one footing on a continuous rocker board you won’t on a Ride Compact. When it comes to snapping out of a turn or generating more air Ride’s hybrid camber boards.  There is a unique ride to the board and it feels like it has an extra layer in it compared to other boards. This gives you a pretty damp feeling for a twin.  Some like it, some don’t and others are ok about. This would be a good board for those that like to ride fast regular or switch even though they are mostly living the freestyle dream on the mountain.  It’s also pretty good in rougher terrain.  We’d like to see a little more edge hold going on for pipe riding and riding in less than ideal conditions but it’s not terrible either. The 2013-2015 Ride Compact all have pretty much the same design and same tech.

We try to get as many images of the Ride Compact, but forgive us if they're not all there.