The Nitro Quiver Fusion is an almost full camber board that is pretty unforgiving but has a rewarding big mountain traditional freeride ride to it. 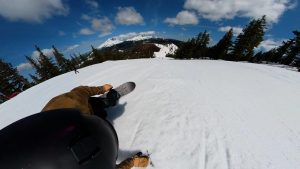 The Nitro Quiver Fusion feels pretty normal for its length.

The 159 Nitro Quiver Fusion worked as good or better than most do for my specs. I was a little heavy for it but that is common for yours truly.

Here are some ideal US boot sizes for these boards. You can of course go bigger or smaller but these work best for not turning the board slower than it should be and not having the dreaded Toe & Heel Drag.
154: 8-9
150: 9-10

There is a little taper happening with the Nitro Quiver Fusion. It does need some back footed weight to keep it from washing in the tail but not too much.

The camber extends almost from tip to tail. There is only a touch of early rise that does increase when you put your weight on the board. It tracks well and pops well but it is only a little less unforgiving than full camber.

The flex is medium-stiff with an almost medium flex in the nose. That little bit of early rise helped make it easier to butter though. Especially when I compared it to the softer flexing Highlander that was full camber. It isn’t actually softer flexing but my demo Highlander was worn out and softer.

You can point it with the Nitro Quiver Fusion, and it likes to go straight. It isn’t a super straight liner but likes it more than many of its peers due to the less turny sidecut. It’s pretty damp too. The base glide is above average but not exceptional.

There is competent grip with the Nitro Quiver Fusion and it is pretty close to many nitro boards that have power pods (disruption in the sidecut near the bindings). Not a hard to icy snow specialist but it can for sure hang.

So going quickly edge to edge with the Nitro Quiver Fusion is pretty fast. When you get the sidecut fully committed it doesn’t match with a tight radius across the groomer carve. The shallower sidecut prefers longer drawn out down the line s-turns to circle carves. The later is doable and it doesn’t totally favor a straight line. It just takes more work.

I didn’t get to ride the Nitro Quiver Fusion in powder but based on the specs and how many boards I rode back in the day, this would work well for mostly camber but isn’t going to stand out compared to many of it’s peers. There is an appropriate amount of setback on board for a shape like this but it feels more centered. This is good for steeper terrain. You can get -3.25” back from center of board with a 22” stance width. You also have 7mm of taper and a much bigger nose than tail. So good for mostly camber but far from great.

Overall, I liked the NitroQuiver Fusion and felt is was a pretty technical but very well rounded ride. If you favor directional riding and want one board, this isn’t a bad choice.

We try to get as many images of the Nitro Quiver Fusion, but forgive us if they're not all there.