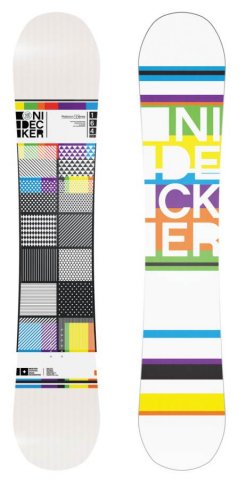 The Nidecker Platinum is one fast aggressive board that is not for everyone. It’s probably more for 5% of the snowboarding population. If you have ridden the A-Frame and think you know what a fast gnarly board is you need to try the Platinum as well. The board is incredibly fast. The Platinum is made to lock into a turn and spring out of it at a higher speed than you started. You really have to be on your game when riding this thing.

I own the older stiffer model and still use it for those mornings when I want to be faster than everyone on the hill. We’ve ridden the newer model and it’s not like the old one but still very fast and aggressive.

The Nidecker Platinum is a stiffer more aggressive version of the Arbor A-Frame.  Nidecker has been around since 1984 and is one of the better freeride snowboard companies out there.  For 2012 the Platinum has stayed camber but added a new sidecut to improve edge hold and softened up.  There is a very mellow magnetraction called ultimate traction. It makes the edge hold better and compensates with the softer flex than the older models. For 2013 The Nidecker Platinum added what they call a Swiss Core.  This reacts differently to how the board is flexed.  For example, when you engage in a carve the core between the waist bends towards the snow to make for better edge hold and more responsive/engaged turn.  In our opinion, this isn’t a game changer like Camrock was for many boards (not this one) but it definitely improves the ride. Nidecker also added a Camrock version for this year that has the same shape and sizing except it has camrock.  We didn’t get to ride it because Nidecker didn’t show up to the on-snow demos in the US but it looks like it’s better in powder, easier to turn, and more forgiving than the camber version.  It takes it more to an aggressive all mountain board compared to an aggressive freeride board.

The sub-2011 models weren’t for many people but each year they mellow out the Platinum.  The 2012 still isn’t for everyone but it’s getting softer and closer to a wider variety or people.

On Snow Feel: The Platinum is at home when the runs are groomed and you are on edge to make a nice carving turn.  The Platinum is made for well-groomed runs and pristine border x tracks but when the days chopped up it’s time to go home.

Powder: Hey it’s a directional camber board with a decent setback but it’s still not a powder board.

Speed: Let’s start out by saying Dear Lord this thing is fast!!!!  It’s a weird kind of fast.  It’s soo damp you feel like you are going slower than you are.  I don’t really want to talk about speeds because I don’t want others to go out and try to beat them but this board was incredibly fast and incredibly stable. We went out with a GPS (a good one) and couldn’t believe how fast you are going. If the conditions are good you feel like you are going half the speed of what you are. So let’s just say the old Platinum is one of if not the fastest board our crew has tried. The new one is still up there and more like a competitor to the Custom X which is a very fast board.

Uneven Snow- Once the snow gets rough and rutted out the old model is a nightmare. The new model is better but it’s still no picnic.

Turn Initiation– Another thing that was interesting about the Platinum was its ability to turn. We had stiff boots and bindings on so it made it a lot easier to handle but it was still relatively easy to transfer from edge to edge for a board this stiff.  The 2012 is softer and a little easier to transfer from edge to edge than before. Don’t get us wrong and this still a board that requires you to be on your game at all times.

Carving– One of the best things about the old super stiff freeride boards was their ability to lay into a hard carve at any speed.  The platinum brings it all back and makes it incredibly easy to turn.  If you are into a really technical rail to rail carve it’s not easy but incredibly fun.  When building speed as you accelerate out of the turn you never feel like the board is getting away from you as many boards do in this class.

Edge Hold: Platinum really dug into the snow and the edge held an edge in any condition we rode in.  The new softer platinum still grips just as well as the old platinum with the new ultimate traction.

Again this isn’t for everyone but for those who know how to handle it will be very very pleased with its ride.  We were.

We try to get as many images of the Nidecker Platinum SC, but forgive us if they're not all there.