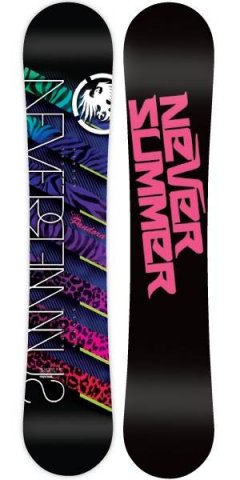 The Never Summer Pandora is a step down in stiffness from the Never Summer Infinity and it makes this a great all around do everything in the park kind of board. Never summer has really stepped up to be more of a mainstream board manufacturer.  The Pandora is also a great all conditions ride and it works with a wide variety of freestyle riders which is a pretty expansive group.

All Never Summer boards are great in almost every condition.  The one complaint is when the conditions are firm the Pandora loses that feeling of stability when you are one footing or flat basing but the same thing happens with all hybrid rocker boards. Its something you get used to after a while but it’s also something we should point out.  For 2011 the Pandora has a little more spring, is slightly damper and has a bit more stability when flat basing. The 2012 and 2013 model is very very similar to the 2011 and there is almost no difference.

Thanks to our friends at Never Summer and our local shop P3 Snow in Mammoth we were able to take this board out for a spin a few different times.  Out of all the $400+ boards the Pandora is the soft and playful board in Never Summers line up.  Out of the hybrid Rocker boards out there Never Summer really have this shape down.  Before we get into the detail of this board we will say that the overall impression is that it’s pretty loose and springy and one of the better do anything park boards.  We would of liked to see the Pandora change like the men’s version the Evo (blunted nose/tail) but it’s still a good board. Especially when there are not many choices in the women’s category.

On Snow Feel: The Pandora has a pretty stable feel on softer snow but it can be loose on softer snow.  That being said every year we ride Never Summer’s boards they are getting closer and closer to fixing this issue.  Taking a freestyle approach to the groomers is very fun with the Pandora.

Powder: You really can’t ask much more from a twin park board when it comes to powder riding. We didn’t have fresh powder but the conditions are good enough to get some pretty decent leftovers. The Pandora was set up centered and even in about a foot of leftover, there was some work on the back leg but nothing like the old camber days.  Still the Never Summer Infinity and many other boards with some type of rocker or hybrid shape and a setback will do much better.

Turn Initiation– The Pandora R is very loose and playful but when it comes time to transition from edge to edge it does an exceptional job.  The Pandora can make some pretty quick turns.

Speed: The Pandora Isn’t made for excessive freeride speed and bombing a few long groomers brought out a bit of chatter but the Pandora did a good job despite it’s soft and playful design.  The Pandora has a fast base too that will help you pick up speed quickly in the park.  It should also be pretty chatter free in the park.

Uneven Terrain: The Pandora is fine in bumpy end of the day snow and it’s got some kind of ability to act kind of rubbery at slower speeds on uneven terrain.

Approximate Weight– Not the lightest board but that is just how Never Summer rolls.  Most of us would trade a little weight for more reliability and that is what you get from NS.

Edge Hold: It holds an edge but in a smooth way.  It doesn’t have that grippy feel but even in wind scoured areas with snowment the edge didn’t give out.  We dont’ ride east coast so can’t speak for how it would hold up on that scary blue ice but can say it will do well on an icy pipe wall or snowment that you encounter West of the Rockies.

Flex: Soft and playful is the name of this boards game.  The Pandora sit’s right in the middle of the soft category.  It’s that perfect flex that will allow you do go anywhere in the park and jib pretty easy.

Carving– The Pandora wasn’t ideal to carve but it never washed out.  It didn’t have that spring out of the turn feeling that some boards do but if you were in a carving mood it could satisfy it.

Switch:  The Pandora rode as well switch as it did regular because it’s a true twin with a centered stance.

Jibbing– There wasn’t much rail and box play today but the soft flex and catch-free feel makes it pretty fun to hit just about any rail you want.  There are better boards for this but there aren’t many all around park boards that can compete.

Pipe: No pipe on our mountain yet.  Based on the edge hold the Never Summer Pandora should do a good job in the pipe and be easy to land.

In summary, we expected allot from the Pandora and it delivered every year we tried it.  This is a solid choice for an all park ride.

We try to get as many images of the Never Summer Pandora, but forgive us if they're not all there.