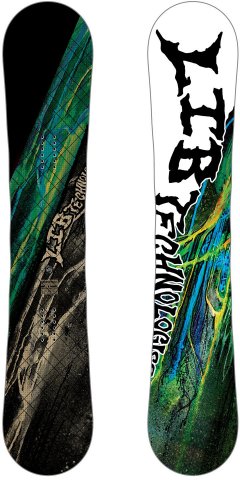 The Lib Tech Banana Magic is a fun, All mountain freestyle twin that is a good choice for those that want a forgiving ride in Icy conditions. To us, it kind of feels like a more mellow playful TRS with the most aggressive Magnetraction between the feet of all the boards in the Lib-Tech line.  The 2019 Lib Tech Banana Magic model seems to be the same as 2018 so the old review still stands.

There is the skate banana, the Attack Banana, and the Banana Magic. The only thing that all three of these boards have in common is “Banana” in the name. We found this to be its own kind of ride.  It’s more stable than the Attack Banana and has a different feel than the TRS but has properties of both.

On Snow Feel: So this seems to be a unique hybrid rocker in the line that they call Enhanced Banana.  It has a lot of rocker between the feet and then transitions to a very mellow elliptical camber that is almost flat. What is weird is it feels almost as stable as the C2 BTX rides we have tried and didn’t feel like the Attack Banana.  In soft snow, it feels stable and in the harder snow, it can feel a little bit loose,  but not super loose. Maybe it’s the crazy big ass MTX bumps between the feet holding it in place or maybe it flattens out really well under our body weight.  Who knows.  The cool thing is it’s mostly stable.  It has a very aggressive but pretty forgiving feel and that is pretty hard to accomplish.  It’s not really about buttering and jibbing as much as it’s about, exceptional edge hold, picking up speed on the mountain reg or switch, hitting the pipe and going bigger on medium to large jumps.

Powder: We didn’t get any deep powder but you can tell this is going to plane well in powder with this design and feel pretty floaty for a Twin.  If you like to ride switch in powder then you will really like this board.  If you like to set it back you might like Jamie Lynn C2 Power BTX Phoenix or other Mervin boards with a set back stance better. Stil,l this and the Attack Banana seems to have a slight advantage when it comes to floating over other C2 BTX boards. It’s not a huge advantage but just a slightly easier float.

Turn Initiation– The Lib Tech Banana Magic takes a little bit more work than most hybrid rocker boards and we like that. It’s still by no means hard but I think it’s because of the really aggressive MTX holds onto the snow a little more before letting go when transitioning from edge to edge. Short radius turns are pretty quick if you know how to make good turns. However, if you know how to turn properly this won’t be very hard at all. Medium to wide radius turns to engage the mellow camber and make the ride feeling pretty good.  It keeps it fun and lively edge to edge and turns are generally easy to make. Just about any kind of turn is predictable and competent.

Carving– When I was drawing this out into harder carving turns the Lib Tech Banana Magic is pretty fun and holds a really really good edge. It’s got a good super aggressive grippy MTX side cut which helps it carve well in harder conditions where others will wash out. However, the rocker in the middle going to flat to mellow camber at the tip/tail didn’t have the resistance into and spring out of a carving turn for me that some other Mervin boards with more camber do when it comes to a hard nipple scratching carve. That being said it really impressed us with how it could hang with many C2 BTX boards I’ve ridden. It’s a bit behind the XC2 BTX boards and a large bit behind the C3 boards out there though. If this was 2013 it would have had a higher rating but lately more boards are coming out with more camber that carves much better.

Speed:  This has a fast base, aggressive flex and a pretty damp feel to it. It’s not at the top of the tops in terms of speed but it’s really good.  It kept it’s speed rather well in the long flat cat tracks I deal with in the Sierras at times and it’s fun to haul ass regular or switch. With most hybrid shapes there is always some chatter but the Banana Magic keeps the chatter to a minimum for its camber profile. The only issue is the stability between the feet. You want to keep this on edge and it’s not the easiest board to flat-base. It’s like so many hybrid rocker Mervin boards out there that give you this feeling when not on edge that it wants to spin on you. I liked XC2 BTX better for speed here but it’s not super loose compared to many BTX boards or some EC2 BTX boards. So it’s no bomber but it doesn’t feel like you have 2 clown shoes on either.

Uneven Terrain:  Usually this type of ride and flex isn’t very easy to negotiate mogul like terrain at slow speeds but this does pretty well.  It can handle the crowded end of the day snow pretty well.

Flex: This feels borderline stiff torsionally and longitudinally.  It’s not a mellow flex but it can butter around ok.

Switch: The same either way.  It’s meant to be ridden both ways. (insert joke here)

Jibbing– Nah….it wasn’t friendly to us but it can be done if you are a good rider. The flex is pretty stiff here but it’s fine for sliding across non-technical boxes and hitting bonks but I wouldn’t want to lap the jib park with this all day.

Pipe: This is one of the better pipe boards in the line. Super Grippy and aggressive while still being relatively forgiving. It drives from wall to wall well enough and feels at home in the pipe. If there was a little more carvy drive this would be about perfect for me.

Jumps: We felt other boards were more poppy than the Banana Magic in Mervin’s line but it’s still got some upper-level spring. Still, we had no problem generating our own air around the mountain and launching kickers in the park was fun as well.

So overall the Lib Tech Banana Magic is a board for the rider who sees hard snow, likes to push your riding regular or switch but still have a bit of a forgiving nature. We all liked this ride and it could definitely work for many riders. Especially for those that value edge hold over almost anything else.

We try to get as many images of the Lib Tech Banana Magic, but forgive us if they're not all there.