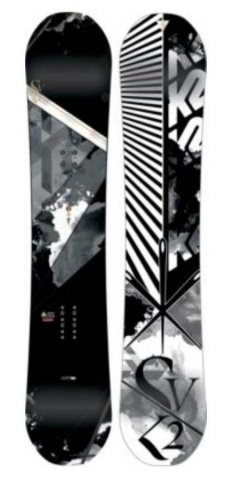 The K2 Believer is rockerless and camberless.  K2 calls it to flatline technology (we call it flat camber) and it helped the slayblade bring home another good wood award for K2 in 2010. Flatline is good in Powder and a little less catch free on normal snow.  The Believer has the stability of a cambered board but doesn’t have the pop or character that much hybrid camber, Rocker, Flat/Rocker, and hybrid rocker snowboards do.  Flat or Zero Camber has many that love it and some that are very critical of it. Not much has changed in 2011 after the big leap to flat camber in 2010 for the Believer.   Many people might be disappointed with the believer if you want a do everything board but if you like to lap the jump park then you might have a new friend.  We have to say that we don’t believe. 2009 Good Wood Award Winner when it was camber.

Days on The Believer-4

On Snow Feel: So you can usually get a good take on a snowboard company by trying one of their mid-tier snowboards.  The Flat Camber change made this not for everyone.  There is something we can’t put our finger on but the Believer is missing something that many all-mountain freestyle snowboards have.  Maybe it’s the lack of any kind of camber or maybe they haven’t figured out how to make flat camber work well for the Believer around the mountain as they did for the K2 Slayblade.  It’s stable between the feet feel though that doesn’t feel catchy.

Groomers/Carving–  There is definitely enough damp inside that board to be able to cruise regular or switch anywhere on the mountain but something wasn’t that fun.  It’s pretty quick and responsive to make short turns.  When making long big turns the Believer felt odd and not very springy. It seemed to take a lot of work to make a nipple scratching carve and there was no return from the board on a carve. The Believer’s tail will not wash out if the conditions are good but the carve didn’t feel good to us. There was no spring out of the turn like you get with camber, hybrid rocker or hybrid camber snowboards.  It also didn’t complete a turn properly.  You would expect more from this board because it is supposed to be an all mountain freestyle board.

Powder: We had one powder day and we can say that the flat camber planes very well but it takes a lot more work than the boards with rocker in their design.  It’s a bit less work than a camber board but more work than any rocker board.

Turn Initiation– The Believer made turning easy when it came to quick turns but something was off when it came to mid to large turns. It was not fun at all.  The board seemed to want to make short radius turns all the time and you had to try extra hard to make medium to long carving turns.  Again something was off.
Speed: The speed with the Believer is very good for a directional twin.  The board could straight line very well and there was little to no chatter.  There are no issues here if you want a fast snowboard.

Weight– The weight is pretty light for a mid-level board.  It’s no K2 0 but it on the lighter side of its price range.  No complaints here.

Edge Hold: The Believer is not going to handle well in hard pack conditions.  We were expecting more from a flat camber board but something is off here.  One day we rode the YES Dudes of History in the morning and then bought out the Believer.  On the morning hardpack, the Dudes held an edge brilliantly. On the second half of the day the snow softened up and we brought out the Believer.  We were very disappointed on how it couldn’t hold an edge very well and we kept sliding out on the hardpack that The Dudes had no problem with.

Switch: Super easy to ride switch.  It was just the same in either direction.  It felt almost like a true twin and we didn’t ride it hard enough to feel a difference in flex.

Jibbing– A little too stiff to jib around all day.

Pipe: Initially we thought this would be better in the pipe but it didn’t have the edge hold to make it good for anything but the soft to slushy days.

Jumps: Not bad There are no issues here with Jumps and this might be the Believers best quality.

We try to get as many images of the K2 Believer, but forgive us if they're not all there.