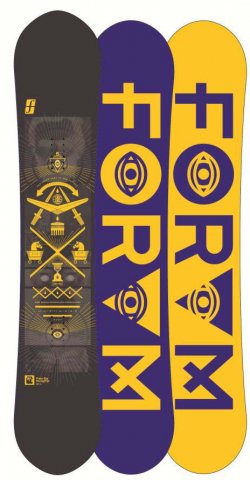 The Forum Honey Pot is a less expensive softer version of the Holy Moly.   The 2012 ride is very similar to the 2011 but it seems to have some more pop. Both turn up the edges in the place where you need them the most making this one of the sketchiest rides I have been on.  The 2013 Forum Honey Pot turned those edges back down and its a great upgrade.  To us, it’s the only model to choose. It’s a solid all mountain freestyle choice It’s the only Honey Pot that truly seduced us. 2012 Good Wood Award Winner.

What a great change in the right direction. We wish we had 2 days on this honey pot and 1 day on the 2012.  The old honeypot now seems like a distant nightmare compared to this board.  The old board was a park to jib ride.  It was hybrid camber with camber between the feet to flat at the tip/tail.   It also had the edge between the feet raised up.  2013 is much more of an all mountain freestyle ride. The only tech remaining in the new honeypot similar to the old is the scoops in the nose.

On Snow Feel: It’s really stable without being catchy.

Powder: The 2013 Honeypot is a much better powder board than the 2012. The flat to rocker makes the float much better than the old hybrid camber honeypot. It’s borderline Good when it comes to powder.

Turn Initiation and Carving: So much easier to carve on the 2013. The 2012 was a nightmare.  The 2013 is actually fun to carve.  It doesn’t have that magic like many boards with camber does but it does have a certain bit of fun to it.  Edge to edge transitioning is a little more work than the 2012 but it’s a lot more fun when your edge grips.  Short radius turns take a little more work than the hybrid rocker and continuous rocker boards but it’s still not terribly challenging.

Speed: There is a good base and a decent torsional flex so it holds up well at park speeds but on the mountain, it’s not bad at moderate speeds.

Uneven Terrain: It’s fun slowing down and dealing with bumpy crappy snow.  It handles rather well.

Weight– It doesn’t feel that heavy or an ultralight board. Forum boards are generally on the lighter side of the scale and this feels like it to us.

Edge Hold: We didn’t really get to test the Honeypot 2013 on hard conditions.  The conditions were soft and really fun. If we rode the 2012 on the same conditions it would still lose an edge.  The 2013 seems like it can handle most conditions you want to ride in.  I think you would have to draw the line at really hard pack snow though. The edge hold nightmare is over.

Flex: The flex feels different and has a nice smooth all around feel.  It’s close to the softer side of medium.  It’s still a little more butter friendly than the average board that’s mostly flat to a very mellow rocker.

Jibs– The flat with mellow rocker makes the ride on this board great in the jib park. It’s great for most rails and is fun on just about any terrain you would encounter in the jib park.

Pipe: If you don’t ruin the rails in the jib park this could be a decent pipe board.

Jumps: Not bad on an ollie and pretty fun on the roller coaster line. It’s not where this board shines but it could do a lot worse.

We had lot’s of fun on this flat to rocker board and really appreciate the new design.  The Honeypot went from a board for a choice few to a board for many. It’s now a very fun all mountain freestyle ride.

The 2012 Forum Honey Pot Snowboard Review by The Good Ride

Forum Honey Pot and Holly Molly are two very unique boards.  The spooned nose/tail is not terribly unique but the lifted edge around the bindings is very unique.  We don’t know what to make of it. It really has it’s own personality but if we were to try to explain it we would say this is a camber board that acts like a rocker board.  It has the stability and pop of camber combined with the loose feel of rocker.  We never would of realized how much of a difference it makes when it comes to turn initiation and a catch free ride.  We can’t say this board was either of our favorites but it did make for a unique ride that some park riders could really appreciate.

Groomers– The Honey Pot really didn’t shine in the groomer category.  Something was off but we didn’t feel comfortable riding in the hard pack with this board. The lack of edge hold made for a ride that slides a lot and and it wasn’t that pleasn’t riding in these conditions.  The ride could be a lot better in softer conditions but it’s still not ideal for groomers.

Powder: Not so good.  This is a camber twin. That will not float well in powder.

Turn Initiation and Carving: The Honey Pot was tough for both of us to initiate a clean turn.  The raised up rails at the bindings makes you feel like you have to really lean into the board and then it feels like its going to give way and wash out.  We actually washed out numerous times when getting to know this board. We found that the Honey Pot skidded out when turning as well.  It was also very difficult to steer when one footing off of the chair.  Both of us had a couple awkward moments that were worse than any rocker or hybrid rocker board than we have ridden.

Speed: The Honey Pot is not ideal for a long straight line on a groomer but it has good park speed.

Weight– Pretty light and easy to throw around

Edge Hold: We found out that you really need the edges between the feet.  The conditions weren’t horrible but they were pretty hard with some scraped away snow on the top.  We took up the Rossignol Angus as well and it held an edge without any problem on any condition.  The Honey Pot slid out a lot.

Flex: The Honey Pot is closer to the medium side of soft but it’s still pretty soft.

Switch: The Honey Pot is a twin with a centered stance so of course it rides just as well switch as it does regular.

Pipe: The lack of edge hold made for a different ride in our super duper pipe.  It wasn’t much fun but we got use to it after a few laps in the pipe.  If the pipe is your thing the Honey Pot isn’t.

Rails/Jibbing: This is border line excellent.  If the flex was just a bit softer the Honey Pot would be really fun.  The spoon nose/tail was super easy to butter off of anything.  This is one place where we felt the Honey Pot did a good job.

Jumps: The Honey Pot is pretty fun on jumps.  It’s very loose and spinney so we had a lot of fun on small to medium jumps.  We didn’t go big but felt it had the potential to. The one thing we notices is the pop wasn’t what we would expect from a camber board. It didn’t have a super springy feel but could do a decent job generating your own air.

All in all we couldn’t decide if the Honey Pot was something we could get use to. Part of me (editor) felt that maybe I didn’t have the ability to utilize this tech.  The person I rode with (Jimbo) is a very competent rider and he seemed to find more uses for the tech but still felt a bit off.  I feel this board could be good for an expert park rider but not for the average all mountain rider like myself.  This is not for everyone.

We try to get as many images of the Forum Honey Pot, but forgive us if they're not all there.