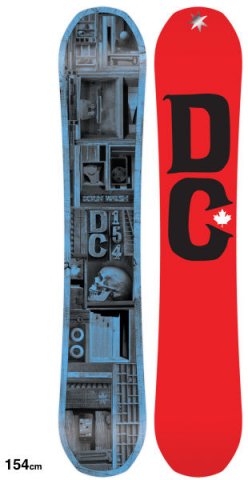 The DC Devun Pro use to be the DC HKD but DC added a flat/rocker shape, changed it to a twin shape from a directional twin shape and started calling it the Devun Pro.  This is a hard-charging twin that is a pretty decent flat/rocker replacement for the HKD and we had a good time on it.

This is one of the most aggressive twins we have ridden as of late. This is not a forgiving intermediate board and almost has the technical feel of a camber board. We rode this right after the Tone and felt it was a bit more lively.

On Snow Feel: It’s stable and aggressive but not too catchy thanks to the rocker in the tip and tail.  It has a fun edge to edge feel and it’s pretty lively for a flattish kind of board. It’s one of those boards that is fine to pick up speed all over the mountain regular or switch.
Powder: It does very well in moderate depths and OK in the deep stuff.  You won’t be leg burn free but it planes very well but isn’t effortless like some boards out there.  Still, it does a pretty good job for a twin that is mostly flat.
Speed: This is a really fast twin and it’s borderline excellent when it comes to speed.  Very stable, fast base and a great board if you like to haul ass regular or switch.
Uneven Terrain: The more aggressive flex doesn’t make for easy bumpy snow riding.  It can negotiate the moguls you have to get through sometimes to get some fresh powder and deal with softer tracked out lines no problem but if you have to deal with harder bumpy terrain it’s not as shock absorbing as some boards.
Approximate Weight– Lighter than allot of boards but it doesn’t feel like it will cave in under a 200 pounder.
Turn Initiation and Carving: We had low expectations for the Devun Pro because this came from the HKD which had some really fun carving ability.  So this surprised us when it came to carving for a flat/camber.  The turn initiation wasn’t easy but better than we thought for the stiffest board in DC’s line.  We liked to work a little bit for a turn and except for super quick turns, the Devun was fun.
Edge Hold: We felt the edge hold was good but it was missing that grip that some of their boards we tried.  The HKD had better edge hold but this wasn’t bad for most conditions you want to ride.
Flex: We liked the flex for aggressive riding but if you want to slow down and butter around then you might want to look elsewhere.
Switch: Same each way.
Pipe: Pretty good in the pipe if you like a stiffer board but we would like to see a little more edge hold to make it an all conditions pipe board.
Jibbing/Rails– not a jib/rails board with this flex.
Jumps: This has some of the old feelings that the camber HKD had when it came to going off big jumps.  It can handle any size jump. However, it doesn’t have the pop that the HKD had.  Not lifeless but not super poppy.

We try to get as many images of the DC Devun Pro, but forgive us if they're not all there.