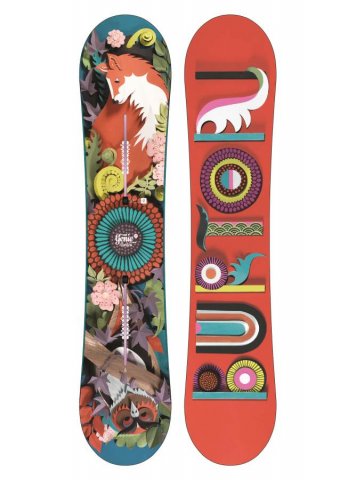 The Burton Genie is an entry level snowboard that uses their new Flat to Rocker tech which makes for a stable easy ride between the feet. It’s very easy to ride on flatter beginner runs and one foot off the chair.

On Snow Feel:   The rocker after the bindings also makes it less likely to catch an edge.  If you are learning to ride in good conditions this beats renting. So we like the addition of flat to rocker aka flat top with the Genie and it helps make the ride a little more stable between the feet.  For beginners, this is a good thing because v-rocker is loose between the feet compared to flat top.  It isn’t as stable as most flat to rocker boards.  It feels kind of in-between hybrid rocker and flat to rocker.

Turn Initiation and Carving: Very easy edge to edge but not really springy out of a turn. All you really get here is a stable flat to rocker ride but it doesn’t give you a fun turning experience.  Carving is not so much fun but it can hold a little bit of a carve in very soft snow.

Speed:  Extruded bases aren’t fast but they don’t require much maintenance so they have a very consistent speed day in and day out.

Uneven Terrain: Bumps aren’t fun but if you happen to be out on a crowded bumpy day this will do well.  Even Burton’s low-end boards handle an emerging mogul groomer day.

Edge Hold:  The edge hold is lacking compared to some boards so it’s going to be more of a good conditions/softer snow kind of ride.  If you ride in icy or harder conditions then keep the Genie in the bottle.

Jibbing:  Very good beginner jibber board. It can give you a little more confidence in the jib park than your average jib board. The lack of edge hold helps a lot here because it doesn’t want to catch.  If you want to lap the jib park this is a great choice. It’s just a little on the longer side to be a perfect jib board but if you size down it will be.

Pipe: Not really good here because there is no real camber anywhere in the ride to give the board drive wall to wall and there also isn’t much going on in the edge hold department.

Jumps:  Not quite as poppy as the V-Rocker and Flying V-Rocker boards in Burton’s line. It gives you catch free stability but at a bit of a cost when it comes to ollie spring.  Still it’s not bad hitting a kicker in the park and it will give you that stability on the approach that makes it easier to learn to jump.

We try to get as many images of the Burton Genie, but forgive us if they're not all there.