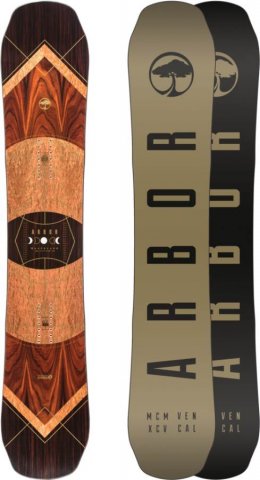 The Arbor Wasteland is a fancy version of the Arbor Coda with a very similar ride. It’s a pretty fun continuous rocker board that has a shit ton of pop, very fun to butter and great float for a twin in powder. We found enough joy with the Coda to not want to pay almost $150 more but it sure does look nice. Our only complaint is how loose it can feel in harder snow and that it’s not that fun to make harder carving turns. Not much has changed over the last couple of years.

Ethics Statement: We don’t get paid by the manufacturer to write these reviews.  No one is perfect and we do make money from the “Where To Buy” links below, but this is our best attempt at an honest and objective review from an average riders’ perspective.
How This Review Happened:
We borrowed this for a day and then returned it.

The 2014 and 2015 Arbor Wasteland has the same exact upgrades that happened to the coda.  The nose was turned from a traditional round nose to a massive shovel nose.  This makes the length bigger by 1cm but the contact length is shorter by 1cm.  So the bottom line is there is a shit ton more nose/tail going on for 2014 and 2015. They are also seperating the sizes from 3 cm per size to 2 cm per size which I like. The ride is still very much the same but now it offers a little more of a playful feel and a lot better float in powder.

On Snow Feel:  There is the same semi loose feel between the feet going on and that same unique bamboo core feel.  It’s got the sizing of an all mountain board with the personality of a soft bendy freestyle board. It’s all about finding things on the mountain to ollie off of.

Powder: Big improvement here. There is 1cm extra on each end to give you a lot more float for the size. It also has this shovel nose/tail going on so this is about as good as a twin with a centered stance can get for riding powder. It can even satisfy the rider that normally likes a directional set back approach to powder.

Turn Initiation and Carving: Same weak carve as before but on the filp side it’s good for a continuous rocker board.  Short radius turns are quick edge to edge and pretty fun. Medium to wide radius turns are decent but there isn’t the fun here that many boards with some camber going on in the profile have. Don’t buy this board if you want a carvy feel.  It’s all about an ollie butter approach to the mountain.

Speed: Same kind of bouncy chattery feel that the Coda has. It feels like a car with soft shocks when you pick up speed and the less contact with the snow makes it no better at speed. This is a playful board and not a bomber.

Uneven Terrain:  The soft shocks kind of feel is outstanding in bumpy rutted up end of the day groomers.  You can ride until the end of a crowded Saturday and still have a better time than most.

Edge Hold:  Same great grip as the older model that allows you to ride without issues in almost any situation.

Switch:  Same great switch ride as before too.  It’s pretty much excellent unless you butter switch because I believe the tail is a little stiffer than the nose.

Jibbing: If the Arbor wasteland came in smaller sizing and significantly reduced the nose size this would be a really fun jib board for us. It’s soft enough for us to play around in the jib park and it can hang there no problem if you are in the mood for jibbing.

Pipe: Again it’s a little big for pipe play but it holds an edge very well and it’s very forgiving for its size.

Jumps: The Arbor Wasteland is all about mountain jumping but it’s great in the park as well. When you ride this board all you want to do is ollie off stuff.

2013 and Below Arbor Wasteland Review

The Arbor Wasteland is a unique board with good graphics and a pretty interesting ride for a continuous rocker.  I guess it’s supposed to be a high end slightly stiffer version of the Coda and it has that same playful but springy bamboo like feel.

On Snow Feel: This is a loose playful catch free ride but it isn’t going to give you that stable approach to the mountain like a lot of boards with more camber in it somewhere.  Flat basing and one footing isn’t that bad for a continuous rocker board but it’s can be awkward for a long one foot run.  It’s a little bit like a skate board with loose trucks if you take on a flat not that steep run that requires you to flat base like a long cat track to get you to another part of the mountain.

Powder: The wasteland is an easy float in powder.  We wish it had a little set back to make directional riding easier in deeper sierra cement but it’s not bad for a centered directional twin.  We had a few pow days on this and really liked the effortless float it provided.

Turn Initiation and Carving: The Arbor Wasteland was easy to turn and could get from edge to edge very easy..especially considering most of us generally ride normal boards.  It made short and wider radius turns pretty and despite the continuous rocker feel it was still pretty fun. When it came to carving the wasteland wasn’t terribly washy but it wasn’t as fun as many hybrid shapes or camber shapes are.  The Arbor Wasteland isn’t the choice for carving but it’s strengths lie in other places.

Speed: This has a fast base and a pretty decent flex but the rocker shape made this not as stable as some boards we rode.  It felt at times like you were just riding on the center of the board and bombing a hill wasn’t as fun as flat/rocker or hybrid camber and of course camber boards.  The more speed we picked up the less comfortable we felt. It felt a little like you were in an SUV with soft shocks when going fast or heading through in choppy terrain.

Uneven Terrain: This kind of sucks at speed but it handles a slower approach to uneven terrain very well.  It absorbs shock like an off road vehicle in super bumpy terrain. It makes the end of a Saturday very easy on the mountain.

Approximate Weight– We didn’t weigh it but it wasn’t light but not heavy.

Edge Hold: We are big fans of Arbors take on edge hold with Rocker boards.  It makes their rocker boards hold an edge better than some of their camber boards.  The sizable extension of the edge at each foot really holds to the snow while not acting grippy in thicker snow.  Very well done.  We rode this board in all types of conditions and we never once had our edge slip.

Flex: The Arbor Wasteland is rated as medium but we felt it closer to soft in the way it rode.  It’s soft enough to butter but not super soft that it was incredibly easy.  Still it’s a good all mountain freestyle type of flex.

Switch: The Arbor Wasteland was pretty easy to ride switch and doesn’t feel much different riding either way.  It’s a fun board to approach anything switch or regular.

Jibbing: It’s not a dedicated jib board but it’s sure a lot of fun hitting small to medium jibs and rails.  We had a good time stopping in the park with the Wasteland.

Pipe: The edge hold here with the Arbor Wasteland was good enough to get us up and down the pipe walls but it was missing something that made it excellent.  Still if you want to lap the pipe the Wasteland won’t be a terrible idea.

Jumps: One of the best qualities of the Arbor Wasteland.  What made it a little awkward at higher speed makes it incredibly poppy when you need to spring into the air off a natural feature on the mountain. It was just incredibly easy to ollie and we all had fun popping off things around the mountain.  When we stopped in the park the Wasteland was really fun as well.

All in all the Arbor Wasteland is a great board for cruising around the mountain and looking for jumps or lapping the park.  It’s a good all conditions freestyle ride. Most of us would rather go with the Coda or Element RX but if you want a higher end ride with similar characteristics then give the Wasteland a try.

We try to get as many images of the Arbor Wasteland Rocker, but forgive us if they're not all there.