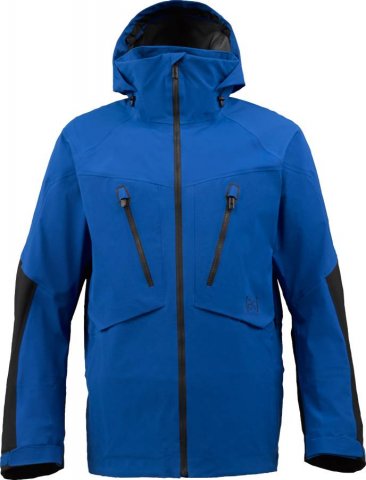 The Burton AK 3L Hover Jacket is up at the pinnacle of snowboard gear technical outerwear and its price acknowledges this. Yeah, $569! and that is not a typo. The Burton AK 3L is a bombproof technical shell and right up there in the Arcteryx category of well-made jackets. Just like most jackets the AK Line, it’s really hard to knock.

Take the AK 2L Stagger Jacket, remove the light insulation, and add one more layer of protection and you have the Burton AK 3L Hover Jacket.  It is light, simple, well made for the snowboard lifestyle and will last a long time. If you have a lot of money or can wait for a summer sale then this is one of the best snowboard jackets you can get.  It also rivals technical shells from the likes of Arcteryx.  Also, the Burton AK 3L has a lifetime warranty just like the other big brands so you can get the same love from a company that 100% caters to snowboarders. Just like most technical 3 Layer shells, they are simple, well made and serve as a near perfect outer barrier to wind and water. If you are going to throw down on something this expensive and this technical you might as well pay a little more to support the snowboard industry and go Burton. The collar is higher than many snowboard collars and makes it a little easy to hide your chin and face in there. The only thing about this articulating hood/collar system is when cinched up around your face there are some exposed spots on your cheeks.  Many don’t mind this and on days that cold are usually wearing a balaclava or something to protect the face.  If you rely on your hood to do most of your facial protection you might want to consider the Burton AK 3L Freebird Jacket as it’s basically the Hover Jacket with a Contoured Hood.

The 2014 AK Hover Jacket seems to have different material and went to a stretch fabric similar to the Freebird.  Some like the thicker feeling of the older material and others like the lighter softer stretchier material that’s on the 2014 jackets.  I’m personally into thicker material but I’m not a backcountry pack light and small kind of guy.  So it comes down to personal preference regarding 2014 vs the 2013 but both are bomb proof.

The 2013 AK Hover Jacket is pretty much the same as 2012 but the Zippers are different. The 2012 had that rubber zipper system with smaller teeth and the 2013 has the same larger tooth zipper that the 2011 has.  They basically alternate zippers every year.  The fit is a little more snug in 2013 than the 2012 jacket also.

We try to get as many images of the Burton AK 3L Hover, but forgive us if they're not all there.