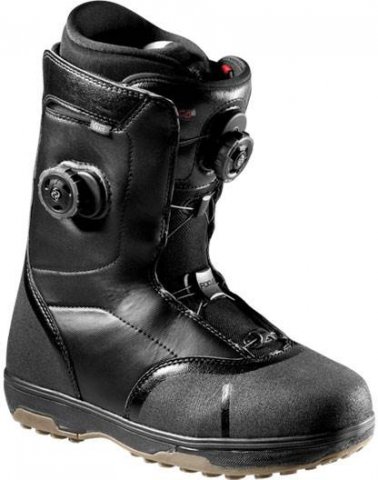 The Vans Cirro has been around for a long time and has a pretty decent reputation This is their flagship boot and it offers up the most all mountain friendly boot in their line. The last 2 years Van’s has made their boots a lot more friendly for over the Toe bindings which are pretty much all there are these days.

Flex: Strong flex for a Vans boot and it’s got a pretty medium/stiff flex with the re-reinforcements in.  Without them, it’s more on the medium side.

Adjustability: There really isn’t much adjustability going on here because the BOA coils share the ankle. These BOA’s are made to crank down around the ankle but not really to provide upper/lower adjustability.

Response: Not bad edge to edge and you can get more response depending on how you configure it.

Traction:  Really good traction and Van’s does it right with the Cirro.

Shock Absorption: There is a nice bit of shock absorption between the foot and sole of the boot here.

Footprint: All Van’s boots don’t have a reduced footprint but they do run a little big so for me, an 8.5 fit’s me pretty well where normally a size 9 fit’s me with other boots.

On & Off Ease: Pretty quick on and off.

The biggest issue with the 2011 Cirro and below is the very soft toe that lives in 2003.  This can really suck if you ride with over the toe straps because the boot just collapses, makes you crank it down more and cause pressure on your toes. It’s a little better than some of the other vans models but over time we see this collapse. All in all the Cirro is a good boot that could be a great boot if they work on the toe. We like the articulation that was added in the ankle for 2012 and even more is the stiffer toe that can handle modern bindings much better than before. The 2013 Cirro looks great and has a stronger toe compared to past models.

Vans never has made a really stiff boot and this is the top of their line up in stiffness. Its still does well in terms of response and handles much better than most of the vans boots when you want to carve a nice turn. The 2012’s also have inserts that allow you to add to the stiffness on the left and right side of the tongue   Also the addition of articulation in the ankle for 2012 helps a lot as well when it comes to preserving the flex for a little longer than before. Its edge to edge transitioning is pretty good as well. The traction is exceptional on ice and packed snow but is not all that when it comes to back country hiking. Around the resort this is excellent though. These boots are really fast to lace up and are very easy to adjust even with your gloves on. That is a huge plus when your out and about and don’t want to slow down.
The 2013 Cirro has an aggressive flex with the power straps and a medium flex without it.  Unfortunately with all years the flex doesn’t hold up as long as some boots as Van’s are known to break down quickly.

The one complaint with all BOA systems is their are many pressure points caused by the extra thick plastic that holds the steel cables. If Van’s fixes this problem The Cirro boot would be a 5 out of 5 or comfort. The BOA System is pretty interesting and before 2012 it was your standard upper and lower BOA coil and both shared the ankle when it came to tightening.  The 2012 takes the coil a step further and the lower BOA goes all the way through the back to help with heel hold.  The problem is that the upper and lower still almost share the same spot in the ankle.

We love the lower part but would of liked to see the BOA system design be a little more like the Vans Aura when it comes to Upper adjustability. Here is what the aura looked like and how you could have complete separation between upper and lower.

The 2011 and below Vans also have a very soft toe so if you strap over it they cave in on the sides. It doesn’t mean you shouldn’t buy these if you have toe straps but its something that could cause a pressure point and make it more difficult for your bindings to tighten. We noticed a big improvement in the 2012 Cirro.  It’s still a little soft but much better than the 2011 and below models.  The 2013 is the best and it looks like it’s up there with most boots in the market these days.

Their air waffle sole makes such a soft boot that you wish you had these on normal shoes for other sports. They are ahead of the game when it comes to sole cushioning. The heel hold is exceptional and always has been for Vans. They were one of the first to figure this out. All in all this boot works near perfect with almost any type of set up. The sole really makes this a smooth ride. The only complaint is more cushioning around the plastic that hold the cable and more stiffness around the toe.

We try to get as many images of the Vans Cirro, but forgive us if they're not all there.