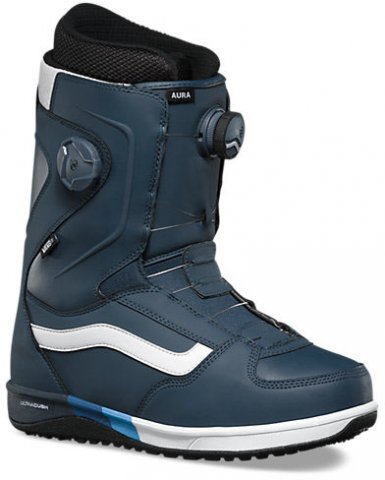 The Van’s Aura is an interesting boot that allows a little more adjustability than most Double BOA boots and also offers up a softer flex.  So I found that most major boots like Burton, Nike, Salomon, etc fit me in a size 9 but the Vans 8.5 fit’s a little better and after it packs out it works well.

Heel Hold:  There are BOA boots that lock in the heel more but to me those are varying shades of excellent.  This clamps down on my ankle more than I need while still allowing me upper/lower adjustability.

Adjustability:   The Aura also has a complete separation between upper and lower BOA coils so you can have the upper super tight and the lower loose without sharing the ankle.  For most of us at The Good Ride we like this separation because isn’t that the point of having 2 BOA coils?

Flex Retention:  Van’s runs a bit softer than many other boots and they get softer over time.  The stitching and boot holds up just fine but they can get pretty soft.  We like that the Aura has a lot of articulation in the ankle and almost two seperate pannels to help maintain the flex that you start out with.

Response:  Pretty mellow response.  Its forgiving but you can make a good turn or two.

Traction:  The 2014 Van’s Aura has one patch in the front with good traction rubber.  The rest is more slippery EVA foam. I liked the older Van’s soles better.  They are heavier but not as slippery. Snow can stick to your boots and if it does to that traction patch the boot becomes incredibly slippery.

Shock Absorption:  The Aura also has very good shock absorption for a boot of this price. There is a lot of EVA foam going on.

Footprint: The Van’s runs about a half size smaller for my feet but the footprint is not reduced. It’s not the largest length from toe to heel but it’s nothing you want to buy to help size down in bindings or waist width.

On & Off Ease: The Aura has 2 BOA’s and a speed lace for the liner to get in and out of.  It’s a little slower dialing out the BOA’s to get them on but pretty easy to get off.

The biggest issue with the 2011 and below Aura is the very soft toe.  This can really suck if you ride with over the toe straps because the boot just collapses, makes you crank it down more and cause pressure on your toes.  This can make you un happy with your bindings as well. Since 2012 the Aura fixed this soft toe issue and the toe is stiffer than before.  The boot also feels a little more stiff than last year making this a very good medium/soft flexing BOA boot.

We try to get as many images of the Vans Aura, but forgive us if they're not all there.

Had these new for one week. Freeriding, off piste, icy pistes and fresh powder. Riding Proto 2, burton cartel bindings

Getting used to them, comfortable, warm, could euro carve so good pressure on toe edge

All ok until sliding down the back of an icy mogul, my leading toe edge caught, stopped and boot collapsed tearing my ankle out. I probably didn’t help but I have had some hard hits on my old K2 without problems. I think they are too soft for any black run or hard freeride. 2 weeks later I still can’t walk properly.

Too Soft / Pressure on Ball of Foot

I've had these boots for a couple years with not a ton of use but after only 5-10 rides I have to get rid of them.

Pros: I like to dual boa and the speed lace liner. Looks are good. Boots are nice and light.

Cons: They squish my toes and front of my foot down too much. I get a ton of pressure on the ball of my front foot more towards the outside of my foot. It's to the point where long toe side sweeping turns are unbearable. I have to stop or cut heelside for some relief! The boot takes up almost none of the forward lean pressure on toeside turns and it all goes into the front of my foot.

I've talked to multiple shops, switched bindings, adjusted stance width and angles and the problem still persists. I had the boot size double checked by REI after they were broken and they are the correct size.

At the end of the day I think they are just too soft and don't lock your heel in well enough.

Bought these when I went from Beginner - Intermediate riding, and they've served their purpose. Nearing the 100 day mark and it looks like the boot has ran it's course. Starting to get heel lift, and the shell is starting to show flex wrinkles. Can feel my outer legs take a beating when I press, and the response is nowhere near as peppy as when I first got them.

Needless to say, I'm happy overall. They've lasted as long as I was expecting. It's a good looking boot, and the BOA system never gave me any problems, and they've been extremely comfortable on my feet. Felt some cold toes on certain days though, and the toe cap gets wear easily if you rest your board on them. Also the sole gets perforated easily with aggressive stomp pads.

Overall a good boot for an intermediate rider who has a thing for that Van look on their feets. Wouldn't recommend for guys who have breeched into advance riding, if you're a hard charging in these, I doubt they will last too long.

Not impressed with these boots whatsoever. They seem cheap and has no ankle support. My ankle feels loose no matter how much I tighten. Also my feet get cold. Doesn't seem as warm as my K2 Masys were.
I have rode only 3 days in these boots and I can't bring myself to like these. At the $250 dollars I spent it doesn't seem like I got what I paid for. They are already peeling at the heel after 3 days of use which tells me the construction is very poor.
I just purchased a new pair of the K2 Masys to replace these very subpar boots.
I def do not recommend these boots to anyone

Not going to be a full review since I recieved a pair and they were too big (and thus never rode them). Sizing runs a bit big so go down a half a size (I'm coming off of Thirty Two boots)