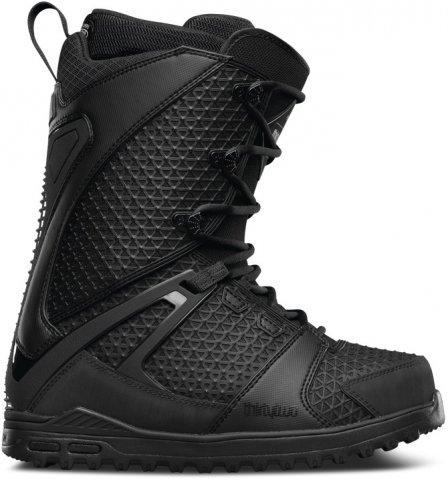 The TM 2 is a boot that many people like. It’s incredibly comfortable for a boot this stiff and has pretty good response.  It has flex on the stiff side of Medium, traditional laces for and on the go fix and molds to your weird feet very well.  We are big fans fo the articulating cuff and this could be a good all mountain boot for the right foot.  32 makes wider snowboard boots so if you have wide feet they are worth considering. The TM two is almost a lace version of the 32 Focus BOA and makes for a very similar ride.  The sole and design of the boot are very similar so if it fits you well, you want a light boot and as a med/stiff traditional lace boot the TM Two isn’t a bad choice.

We try to get as many images of the ThirtyTwo TM-Two, but forgive us if they're not all there.

I've worn these boats for the last two seasons and been impressed. They've held up pretty well, although I may need to retire them at the end of this season. Great response from the boot. I used to feel like I had to crank my boots and bindings down and was terrified of any heel lift. I've learned, however, that pairing this boot with a good stiff binding enables me to keep the boots and bindings fairly loose and that even with a little heel lift, the stiffness of the boots allows me to whip turns without worry. Only ding on these boots is the EVA foam sole -- traction is pretty awful and I've almost slipped in parking lots, etc. countless times. They now make the boot with a Vibram sole; I'd recommend forking out the extra cash and get that model. Last point -- I have pretty narrow feet and the boot still fits great even though 32's reputation is for catering to wider footed riders.

Last year I rode the 12/13 TM Twos and loved them. My only complaints with last year's model are that the extra light soles weren't very grippy for hiking, and that toward the end of the season the boots lost a significant amount of stiffness. For the 13/14 model, ThirtyTwo upgraded the tread pattern, making them much better suited for hiking. So far I haven't slipped around on hikes that sent me skating all over last year. As I've only put six days in so far, I can't speak to the boots' stiffness longevity, but my feeling is that if you put in enough days a year, you pretty much have to upgrade every season if you want top level performance. I'm surprised that some of the other reviewers feet got cold in the TM Twos. I also live in Montana and I've never been anything but warm in my boots. In fact, I rode all day last week in subzero temps and experienced no problems in the temperature department. I would recommend these boots to anyone who likes a stiffer boot that breaks into an ideal medium flex (quickly) and rides all kinds of terrain. You can crank the liners down and lace the outer boot loose and still feel confidence in your boot to binding to board connectivity. The TM Twos are without a doubt my boots of choice.

I find writing a review for boots is not that helpful because they are so specific to each individual, but since I find these boots to be really cold I think that is worth sharing. I have the 12/13 model, and the pair of boots I owned before these were 32 Primes. I love the flex of these boots versus the Primes, it's just the right kind of stiff. The problem is I just can't stand how cold my feet get in these boots. I had the same trials as the other reviewer, tried wearing them loose, bindings lose, different socks, different soles, and as a last resort had them stretched and widened at my local shop. I live in Montana and it gets pretty cold on the hills some days but I never had a problem with the Primes. I would guess that the venting on the toes and the super light liner would be the main cause, and as much as I like the flex of the boot I will be searching for some new boots soon.

I bought my first pair of TM Two's a year ago. Having tried on Burton's - heel lift, K2 - some ankle crunch and a couple other brands the TM Two' just fit my feet perfectly. I can board all day and walk around in them all night without my feet ever hurting. Some people hate me for this ;-)
The boot performs well and I'd rate this a medium+ stiffness.
Only complaint I have is that the soles don't grip very well on hard pack snow or icy conditions whilst walking around. I've almost seen my backside many times when walking at an incline or decline. And this isn't me being reckless because my friends don't have the same traction problem while walking up or down the same angles. Other then the grip issue I don't see myself switching to any other boot in a hurry.

Hill - Fernie, BC. Early conditons/groomers followed by 160cms of storm pow in 5 days.
Niseko - Mainly powder and some park.

I've always ridden 32s becuse they suit my wide feet well and for some reason the 32 "fit" is the one that feels most secure on my foot. I tried Salomon, K2, NorthWave and Nike when shopping for my latest pair (TM2s) and none seemed to hold my foot the way the TM2s did.

I really like the way they ride, feeling really connected to my board. They're rated as medium-stiff and this is pretty much where they come in at, if anything more on the medium side (when compared to a stiff K2 for example). They suit my style of riding well and I can really lean in to the fronts when carving groomers knowing the board will come with me and in powder they hold up really well when bouncing around in pillows but with just enough flex so as to be forgiving.

It's worth pointing out that I switched footbeds from the factory insoles to some Superfeet Orange and I find these support my arches better.

HOWEVER I find these quite a cold boot, which was never an issue with the megalights or the prions. I've never suffered from cold feet and found this quite strange. I even switched back to the factory insoles but no change, they were still cold. That said, they were fine in Fernie, where it averaged -6 but here in Japan where it's more like -12 average (with greater wind chill) I do find them cold. (Having tried double-socking, not cranking bindings as tight, not cranking laces as tight, reverting to factory footbeds... pretty much everything!)

Two other points of note:

1) while they are fantastic on the board, they're not fantastic when hiking. I appreciate this is not what they were intended to do, so it's forgiveable, but makes for some slidey times when walking on cat tracks out of the slackcountry or on short hikes up ridge lines.

2) I didnt get them heat moulded so as to prolong the life of the boot and it took a good couple of weeks to get fully comfy on my feet. Now, however, they are so cosy. If you're getting this boot for the season, stick it out, but if you're a vacation rider it might be worth getting them heat moulded in store.

Overall, the cold feet thing is a frustration but this aside the boot performs really well in all conditions and is wearable all day, all over the mountain and gives great response whether you're sessioning kickers or riding technical, steep tree runs.

Since no one has written a review on this boot for the website... I figure I might as well do so. Bought the 2011 model last yr, boot feels real light, looks great...almost like a regular sneaker look to it. I hate it when boot packs out so I bought the size that fits me snug when brand new. This of course made me go through 'growing pain'. It felt real tight at first when I was still trying to figure out how much to tighten it being a newb with the lace system and a diff brand after switching from solomon quick lace system As a result I felt a lot of pressure on the toes and pressure points on the front of the ankle which almost felt like it was cutting off blood circulation to my feet. After riding it 3-4 times and figuring out how much to tighten it, it felt a lot more comfortable when I finally broke it in. By this time, season has ended but I got a good 3 days of riding up in Whistler, BC. I'm dying to see how it feels this season when snow starts falling again. Keeping my finger crossed. Overall, Its a good boot, built solid, looks great, and def quick response being a mid-stiff built but theres a learning curve on how to use it according to feet built and size.

product 0.3
4.2 5.0 6 6 I've worn these boats for the last two seasons and been impressed. They've held up pretty well, although I may need to retire them at the end of this season. Great response from ThirtyTwo TM-Two Review And Buying Advice