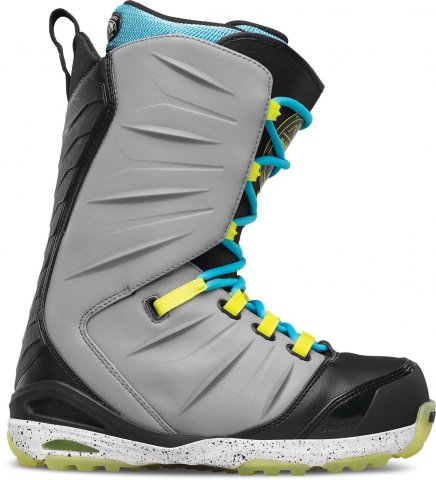 The Thirty Two Prime is a moderately stiff all mountain or freeride/big mountain boot that is a traditional lace option for those riders with a wider foot. The Prime has replaceable cages that add a little stiffness and response to the boot.

If you like to go fast and have easy turn initiation this is a very solid choice.  32 also makes boots that are a little wider so if you have wide feet they are worth considering.  If you have more narrow feet then you might want to consider another company.

Flex:  Pretty stiff off the bat but after a few days it works its way down to more of a med/stiff boot.

Response:   This is one of Thirty Two’s more responsive freeride/aggressive boots. It’s pretty easy to power harder turning boards. It’s not as aggressive as some in its peer group but it works and most people really don’t need that super quick response.

Comfort:   Even though this is stiff it’s super comfortable.  I only rode this one day and it felt like it already knew my feet.

Heel Hold:  It’s not there with double boa boots but I had no problem locking in my heel if I tightened the laces up tight.

Adjustability:  Traditional lace takes more work but you can really dial out almost every part of your boot to fit it perfectly. You might have to tie a few extra knots but man it’s great to have a perfect fit.  I still see the need for traditional lace and still have it for some boots I ride.

Flex Retention:  The articulating cuff will keep the stiffer flex preserved longer than a boot without it but Thirty Two is known for breaking down a little quicker than some of their competitors.

Shock Absorption:  These days the Prime is very shock absorbent and soft.  The Sole is all EVA foam which is very soft and cushy.

Traction:  On the downside of the Sole being all EVA foam is the traction sucks and the sole wears down very quickly.  For me, this is a deal breaker because after 80-100+ days of walking through a parking lot these boots would be demolished. Just from my walk that day I could see signs of wear. They also aren’t boots I’d want to walk through a long icy patch with and often times parking lots are icy.  I wish Thirty Two would just spend a little more money and just put a rubber sole over the EVA.  It doesn’t have to be Vibram but it does have to be some sort of normal rubber and not soft foam.

Footprint: Not a bad footprint and it’s reduced enough to be about 1/2 size smaller than most boots that haven’t gotten into reduction.

On & Off Ease: Not super easy on and off but people who like traditional lace know what they are getting into.

All in all the Thirty Two Prime is a good boot but it’s not something I feel comfortable recommending until they put the rubber back on the sole. If you can live with the single mold EVA then it’s not a bad boot and very comfortable….especially for how stiff it is.

We try to get as many images of the ThirtyTwo Prime, but forgive us if they're not all there.