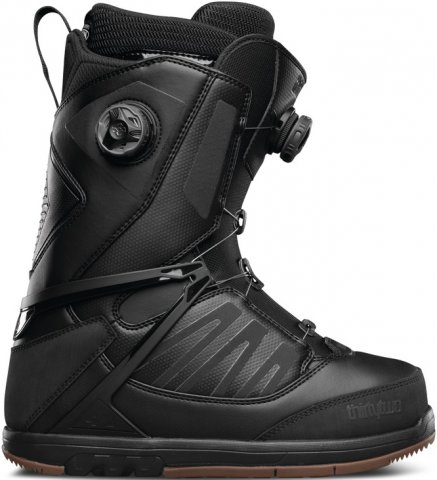 The Thirty Two Focus BOA has been around a while and it’s one of 32’s most popular boots, has a great rep for all mountain riding and it’s best for a medium to the wide footed rider.  The Focus BOA isn’t the best when it comes to longevity but it holds up pretty well compared to other boots in the line and it’s also usually comfortable day one.


Flex:  Feels pretty medium stiff when you start but it quickly goes to Medium after about 10 days on the boot.

Response: Thirty-Two isn’t known for the uber response but the Focus BOA isn’t bad. It’s good for most mid-range all mountain boards when it comes to turning initiation.

Comfort: Thirty-Two is usually the first-day comfort.  Many boots can take up to 10 full days of riding to break in but often on day one there are no pressure points and it’s pretty damn comfortable.  Neither of us felt these boots uncomfortable after the final twist of the BOA after our first lace up.

Heel Hold:  This focus BOA system actually focuses on your ankle and if you are one of those guys who’s paranoid about heel lift then you can crank both upper and lower around the upper and lower part of your ankle to the point where it will be impossible to lift your heel even a millimeter if the boot fits you right.  I personally don’t care too much about heel lift as long as there is a response but there are many who are the exact opposite of me.

Adjustability:  Upper and lower BOA’s share the ankle which sucks for some that want more separation but if you having your heel locked in is the first priority you won’t care about this.

Flex Retention:  Now there is a joke out there by many that Thirty Two stands for the day the boot will last. While it’s not a literal joke it does state one of the problems with their line of boots.  They are known to break down and pack out faster than some of their main competitors and this boot is no exception.  They have been better as of late but still don’t have the flex retention that we’d prefer.  It can still get you through a 70-80 day season without completely giving up.

Shock Absorption:  Really nice upper tier shock absorption that can make your ride feel like a pillow if you have a cushy binding and can also make the ride better if you have a binding with little padding.

Traction:  Now this is one of the only boots left in Thirty Two’s line that still has rubber on the bottom which makes for much better traction and a much longer lasting sole than the Single Mold EVA insoles Thirty Two is mainly doing these days.  I hope this never changes.

Footprint: Thirty-Two got with the program and the boot on the outside for most sizes is 1/2 size smaller than the older boots you rode in the past or those that never got with the reduction program. It makes it easier to ride smaller waist boards and fit into those border size bindings. It’s better to go with something very reduced if you are truly on the border but this isn’t bad if let’s say you are a size 10 and just want to fit better into a size medium binding.

On & Off Ease: BOA can be super easy on but other times take a really long time if you don’t know how to dial to comfort. I’ve seen BOA users take longer than traditional lace to get them on but still feel like they are going faster because they are twisting a dial.  It’s much easier than traditional lace but it’s not always faster.  Taking them off is super quick.  You just pop them and they are off.

So all in all the Thirty Two Focus BOA is one of those boots that I often recommend to medium to wider footed riders.  It really all about comfort with these boots and that is one of the most important things when it comes to boots.

We try to get as many images of the ThirtyTwo Focus BOA, but forgive us if they're not all there.

The worst boots I even worn

You can’t imagine the consequences of putting a super thin liner into a super stiff boots! It’s hurt my foots, toes and the front of my calf! The design is totally suck and unreasonable! I just give up this boots on the second days on slope and need to buy another boots for the rest of my trip!! This is the worst boots I ever worn!!

Day 1: A little sore but very comfy and super stiff, awesome! Never had boots this stiff. Love the adjustable ankle and arch support.
Day:3: Packed out perfectly, I can rail and turn on a dime on toes side. It took a awhile to get use to such narly toe edge grip.
Day 5: One of the boots tongue is getting softer than the other, not much. A little heal lift in the other.
Day 7: Toe is starting to band the toes box from the slop. Tried tightening it down more but it would cut off circulation. But not bad, manageable.
Day 9: POS - There's a ton of heal lift, slop, new pressure points on the toes and one of the toes is bruised from toe bang. Cranking the boa's and pulling the laces extra tight doesn't help. I now have pain on the bottom of my suggesting thr arch supports are trashed.

I've never had boots wear out as fast as these. It's by far the worse $390 investment ever.

So I bought this boot because my Burton Ambush boots finally died when I was on the mountain recently. I would have to say that this is a really solid boot. It was the most comfortable Thirty Two boot they they had on the mountain and I like how I was able to get it snug because I'm usually against BOA. The one thing I would have to disagree with the review on here is that the BOA actually tightens in different areas of the foot. I looked at how it was tightening before I put on the boot and when it was actually on my foot. Response was very good, a lot quicker than the ambush which I could attribute to the stiffer boot. All in all I enjoyed this boot a lot and

product 0.3
2.0 4.0 3 3 You can’t imagine the consequences of putting a super thin liner into a super stiff boots! It’s hurt my foots, toes and the front of my calf! The design is totally suck and unr ThirtyTwo Focus BOA Review And Buying Advice