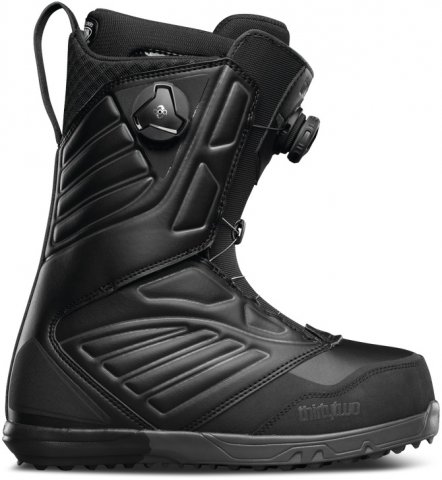 The Thirty Two Binary BOA is like Thirty Two says it’s a Double BOA version of the Lashed.  It’s on the soft side of Medium and will work with a wide variety of riding styles. It’s best for people who have medium to wide feet.  The only issue is the all EVA foam sole has minimal traction which can be sketchy at best and at worse very dangerous when walking on hard snow to ice.

Adjustability:  Even though there are 2 BOAs for upper and lower they share too much of the middle to be separate. It’s not like speed lace that has upper and lower.

Flex Retention:  ThirtyTwo breaks down pretty quick and packs out pretty quick so the Medium to medium soft flex will definitely soften up over time. There is some good articulation in the ankle so it shouldn’t happen as fast as older Thirty Two boots will.

Response:  This is just like the Thirty Two Lashed and Lashed FT. Smooth and forgiving but there is still a little response going on.

Traction:  This used to have pretty good traction when it had a rubber sole when we first reviewed this but now it has a single mold EVA Food Bed and it’s scary to skate in an icy lift line or walk in an icy parking lot.  We would not trust these boots on a hike either.  This sole can lead to injury.

Footprint: ThirtyTwo has a pretty reduced footprint and the 2014 ThirtyTwo Binary Boa has a nice curve to the footbed to even further reduce the chance of heel and toe drag.

On & Off Ease: Double BOA’s are a bit longer to put on than speed lace but easier to take off so they are both pretty quick.

We try to get as many images of the ThirtyTwo Binary BOA, but forgive us if they're not all there.