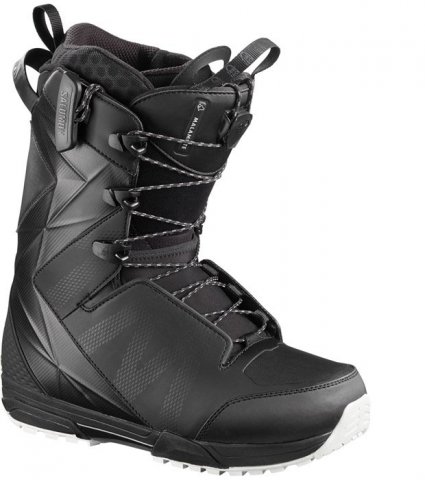 The Salomon Malamute boot is the Burton Driver X’s main competitor.  It’s stiff, mean, aggressive and one of the most expensive boots Salomon sells. If you combine this boot with a stiff binding and a good freeride snowboard you’ll have a good ride.

The 2015 Salomon Malamute has the same ride as the 2014 except it has a reduced footprint which was long overdue.  It’s still 1/2 size or more than most really reduced footprint boots but it seems like it’s 1/2 size smaller than the previous years.


Fit: The fit of these boots for me feels a touch roomy on a size 9.  I feel like I’m in between 8.5 and 9. If I kept the 9 I’d probably use some boot fitting foam to fill it in as it packed out.

Flex:  If you like a stiff freeride boot here you go. It’s a very stiff rigid boot.

Comfort:   If you have a big foot or large calves, the Malamute might run a bit tight.  It also has a cuff that has a bend designed at the ankle to make the forward lean easier. I don’t think they make this in wide.

Heel Hold:  Pretty good grip for me around the heel.

Adjustability:   To us at the good ride that makes the Salomon Malamute one of the most adjustable boots you can buy.

Flex Retention:  Salomon boots hold their flex pretty well and there is some decent ankle articulation going on here. However, it’s not going to be the same as when you started 100 days later.  It breaks down and isn’t really a leader when it comes to flex retention.  Is it bad?  No, it’s pretty good…..it’s just not at the very top.

Turn Initiation:  The Malamute is also able to bend any board to its will and is one of the top freeride choices you can make.  The Malamute is a serious snowboard boot with amazing turn initiation.  It’s not ideal for those that are riding easier turning boards.  It can overpower them and make the board feel jerky edge to edge.

Footprint: 2015- Huge improvement over last year.  It’s not super reduced and still a good 1/2 size smaller than the F-Series boots in Salomon’s line but it’s not going to be a crazy big difference anymore. 2014 and belowDespite it’s high price the footprint is really large. Actually, it’s one of the largest footprints I’ve seen.  Boots like Ride and Burton are a size or even smaller on the outside so don’t get this boot if you are bordering between binding or board sizes and you want to size down.

On & Off Ease:  The speed lacing system isn’t quick like some of its competitors but you can custom adjust the lower and each rung of the upper.

All in all, this is one of the better stiff freeride boots you can choose.  Not much has changed from 2011 to 2012 and both are great boots. The 2013 and 2014 Salomon Malamute is pretty close to the previous models as well.

The Footprint was much bigger with the 2014 and below Salomon Malamute.  The 2015 Salomon Malamute is about 1/2 size smaller.  Here is a comparison between the very reduced footprint boot the Ride Anthem which is one of the best in the industry. 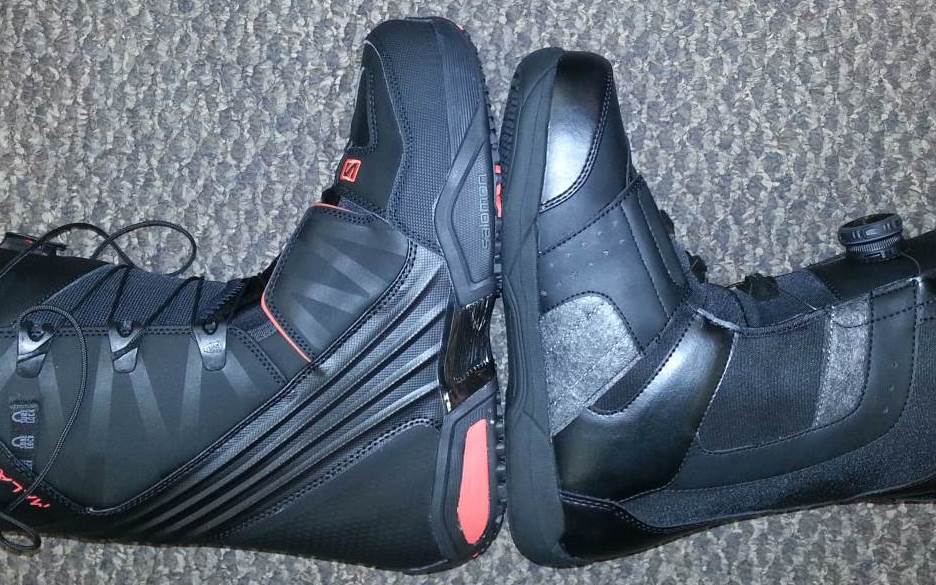 We try to get as many images of the Salomon Malamute, but forgive us if they're not all there.

Great boot for all mountain

I’ve been boarding for more than twenty years and had progress every season. The real progress stated with my first pair of stiff boots, Vans Fargo Boa. After ten years they were nothing but shreds (you dont throw away legends, though). Bought the stiffest techy boot I could find to replace them, Ride Trident. Triple Boa and all the bells and whistles. Wrong sizing and fit, terrible tongue and pressure points. Exit!

I have narrow feet, a liking for Boa and lots of support as I ride a decently stiff board (163 cm NS Cobra). I ride flowy, carve the corduroy and seek the sidestash pow. No park or big jumps. I was adamant about a Salomon boot without Boa, but it was love at first ride. The inner boot with speed lacing and wrist strap is very comfy and supportive, the outer boot gives a nice support progression. So far, after one season, it is the best boot I’ve tried. Entry and exit is easy (just pull the tongue) and adustments are easy too.

The only downsides are slower laceup than Boa and the occational tongue out of position. Will buy again.

I cant think the last year didn't ride in malamutes or will change boots, these are as stiff as anyone cud want. SNUG these are like a ski boot kinda fit, thin and totally form fitting. love these.. love em.
weight wise they are good , pretty light not too high up the legs and don't hurt the feet first day or two out. havnt had them custome fit, hadn't seen the need, this is my 4th sets over the last 10+ yrs. I change these every 2 or 3 seasons for no other reason than modern tech , the fisrt set I had are just as comy as the latest. just sans all the high tech inner liner and boa string strength. they are fidgety to get off..but that's a small price to pay for totally locked in boots.
sizing has erred 1/2 a size over the yrs, coming lower now from 27.5 to 27 the last 2 pairs. funny that......
lacing system in tops , u don't move, Im heavy and boots do slip but a super quick adjustment on the lift line and good to go again.
pair these with salomon bindings and I cant be happier. nothing to say negative what so ever.
warmth.. it has been said these arnt great, well the older ones weren't , but the last 2 models are no issue at all.
if u like a super stiff boot and don't have yeti feet, these are perfect really for just about everything.
oh
and they are pretty comfy to go along with stiffness.

They finally dialed it in...

I\'ve been riding Malamutes for ages, and I\'ve been trying to find a shorter boot with a similar fit/feel for just as long... I wanna say if these fit your feet really well and you like the stiffness, you won\'t find a better boot for yourself. I\'ve tried every stiff boot out there - at least in a shop, but sometimes also riding - the Malamute is my boot. But you gotta figure that out for yourself...
A hint on their sizing: Salomon have always had a funny sizing! In the last ten years I\'ve needed three different boot sizes of the same brand/model, which always had the same fit inside: just barely touching the front with my toes when standing relaxed. So keep in mind: it\'s all just numbers! You have to go and try! A Burton, ThirtyTwo, Ride and Northwave fit me in a US11 the same way the Malamutes do this year (14/15) in a US10. So to compare the footprint you can\'t compare a 10 with a 10!! I compared my US10 to Burton and ThirtyTwo US11 and the footprint is exactly the same! My 13/14 Malamutes had a full size bigger footprint! So finally I\'ve gotten all I wanted! The best boot for MY feet with a totally acceptable footprint!
The new sole is a big improvement, too! Very solid to walk on, never clogs up with snow, cushy enough.
Only downfall: last year and this year their \"criss cross\" locker failed constantly. Just the top lock though! You can fix that with new laces: 3mm rope from your local climbing shop! They look the same as the original Salomon laces, but for some miraculous reason they don\'t slip...

Response: Thanks for your input and interesting to hear how the fit works for you. The size 9 Malamute and all Salomon boots (not including the F series) fit me almost the same from heel to toe as the size 9 Burton and Thirty Two boots that I\'ve tried.

product 0.3
4.7 5.0 3 3 I’ve been boarding for more than twenty years and had progress every season. The real progress stated with my first pair of stiff boots, Vans Fargo Boa. After ten years they were Salomon Malamute Review And Buying Advice