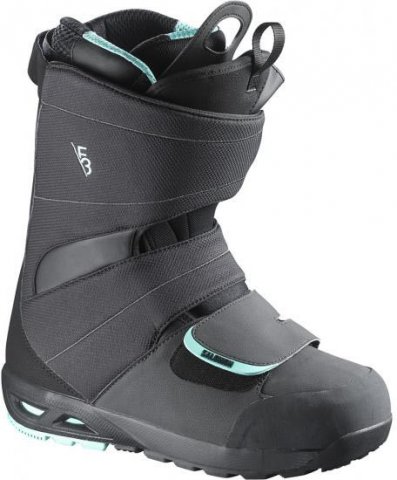 The Salomon F 3.0 Snowboard Boot is a very well made very reduced footprint boot that works with a wide variety of boards.  For the last 3 years, the boot hasn’t changed much and it’s always been a very recommendable boot.

Days:  1 but many more coming as I own it this year
Riders: James
Bindings:  Burton Cartel,
Boards:  Jones Mountain Twin

Fit: Feels true to size.  My size 9 feet fit a size 9 boot very well. The F Series boots run a little on the narrow/snug side and they feel like there is a little less room for my toes to wiggle in the toe box but it’s not uncomfortable.  It feels about the same as Nike boots….maybe a touch wider.

Flex:  Nice middle ground flex that feels like it’s supporting you but also allowing you to move.

Turn Initiation: Nice easy response edge to edge and the kind of response that can work with a quiver of boards.  These are the kind of boots that turn a freestyle board without making it twitchy and then change up to a Freeride board with semi-challenging tun initiation and be just fine.  If you want more response then go with the 4.0 but I’m more preferential to the middle ground response here.

Comfort:  Very solid comfort factor here. Upon putting them on they felt like they were made around my feet.  Also, the boots roll in a bit on the inside so it’s a little easier on the hips, knees, etc if you aren’t in canted bindings.  If you are in Canted bindings it still works just fine.

Heel Hold:  So Salomon has a different design along the heel that gives it a little more hold than other boots out there. The BOA versions in Salomon’s line crank down a little more but this is pretty close to the Synapse Mary rides. The reduced footprint with the 3.0 is so much better than the Synapse that it’s worth it.

Adjustability:  Pretty good adjustability here.  It’s unconventional and a little awkward at first but you can dial out your fit really well.  There are 2 velcro straps around the bottom of the boot.  Then there is a strap for around the ankle that locks up shortly after.  Then there is the top that has it’s own lock too so you can separate the tightness around the boot in 3 places. Very well done.

** There is one thing unique to the F-Series Boots. They have a fused liner that isn’t removable. Because of that, it’s difficult to add aftermarket custom fitting tools like J-Bars and such.  You can get in around the heel but you can’t get down to the toe or between the footbed and the liner. Everything is sewn across the bottom. It’s also suggested to keep them on a good boot heater when you take them off so it dries out the entire boot.

Flex Retention:  Now there isn’t much revolutionary going on here with flex retention but this reduced footprint boot doesn’t pack out much or noodle out after a full 100 day season.

Shock Absorption:  There is a lot of nice shock absorption going on here that makes this binding great for a bad landing or just keeping your body very insulated from the interface of your board and the snow below.

Traction:  The green stuff you see on the bottom of the boot is some kind of EVA foam but the rest is a pretty soft rubber that has good traction.  It also doesn’t wear down super fast either.  It’s very good for walking in hard to icy snow and it’s not bad everywhere else.

Footprint: Right there with Ride and Burton and it gives you almost a full size smaller on the outside than Salomon’s non-F-Series boots. Burton still has a little less toe/heel drag potential but all three now have almost the same length.  The only drawback with the Salomon F 3.0 is you can’t take out the liner like you can with the other boots.

On & Off Ease: Once you do this a few times the Salomon F3.0 is pretty quick to lace up and take off.  I personally think it’s faster on than Salomon’s BOA boots and just a little slower off.

The Salomon F3.0 is the F2.0 with a little more comfort and a little higher end tech.  It’s a solid all mountain to freestyle boot that has enough going on to power a board into a hard carve but it’s also forgiving enough to play in the park well too. The addition of a new speed lace system closer to Burton’s easy speed lace system is well received and so is the additional cushioning in the sole.  It makes for an easier to lace and more shock absorbent ride than Salomon offered in the past with the F-Series models. The Salomon F3.0 is a softer more playful version of the F4.0.  It’s incredibly comfortable and a little more on the mid-side of the flex world.  The F3.0 has reduced the footprint that is very reduced these days.  It’s right there with Burton and Ride.  Only the F-Series though.  The Regular Salomon Boots do not have this level of reduction. Of all the Salomon boots we are biggest fans of the F-Series boots for this reason. There is a little design difference between the 3.0 and 4.0 boots in the bottom of the boot.  The F3.0 has a velcro strap at the bottom, an ankle piece at the middle and a top piece.  The F4.0 has 3 straps all done with lacing.  The lacing locks at each key point and it feels a little more supportive/responsive than a standard boot tongue combo.  This is a great all mountain freestyle boot, but it can be ridden with many board/boot combos. Not much changed from 2013 to 2014.

We try to get as many images of the Salomon F3.0, but forgive us if they're not all there.

I'm now on my 3rd pair of these, the old ones were holding up but kinda smelly after a 5 day hut trip.

Just a little update in the 2016 model. They improved a few things. -The lacing is a bit easier, you don't have to yank it as hard as before.
-The outer is different material, more waterproof and less like to wet out on a long warm day.
-The sole has a bit more grip.
-The overall fit and finish is better, they look better made.
-The toebox is a bit softer and more comfortable, fit is the same. Still great.

Some stuff I didn't like: The little pockets for the laces are kinda useless and in the wrong place. The new boot is very hard to get into because they added a neoprene cuff over the top of the foot, I might just cut this off if it doesn't get better with use. It's 15grams heavier, not a lot but still lighter would have been better.

Overall I still really like these, but you need to dry them more carefully than a boot with a liner. I just bought my 3rd pair, they are stupid cheap here in Europe so I don't mind if i only get 2 seasons out of them.

I'm on my second pair of these, they are the best boots i've ever owned. The lack of inner boot doesn't bother me, they don't get wet very often and I have two pairs anyway. The reason I bought these is mostly the weight. These are probably the lightest boots on the market right now that have fast lacing. I'm a splitboarder, so weight is important to me. They are not as stiff as some hardcore splitboard boots, but that suits my style more anyway and it makes it more comfortable in walk mode because they are not as high on the ankle. The sizing is weird though, so make sure you fit them.

Good but not great

Salomon F3 is a good boot, but not great as the good ride has suggested.
Lets start with the two main weaknesses,
The lacing plastic piece (I don't know how to describe it, but basically the piece at the middle of the boot which secures your lace) snapped after a few days of use. I was just trying to tighten up my boots then they went flying out. This really pissed me off because that meant I couldn't tighten the lacing in the middle.
http://i.imgur.com/IKlodV7.jpg
Thats the picture of the aftermath.

Secondly, you can't remove the liner to dry in this boot. Well, in that case you might think the boot would be pretty waterproof to make up for that. Not really. The inside of the boot always got wet after a day or two and it does not dry out for ages. I had to buy some hand warmer packets and shove it in the front of the boot to get it dry.

Also getting into the boot was a bit of a problem for me, I have slightly bigger feet than most and I felt like I was going to break the boot every time I put it on. Even with the lacing system all unlaced it was still a bit of a hassle. But if you have normal or smaller feet you should have no problem here.

Good points are the great shock absorption and footprint reduce.