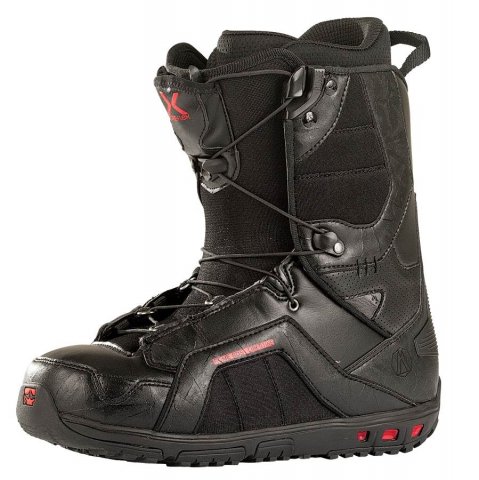 The Rome Libertine Pureflex is a pretty good snowboard boot from Rome for someone who likes a mid to almost soft flexing boot. Rome’s boots fit similar to the way Burton Boots fit and are very comfortable (sometimes on day 1). Despite its almost soft flex, it does have a lot of response. The Libertine also has a decent amount of sole cushioning.  It has a hint of articulating cuff going on so it will last a bit longer and flex a little bit easier. The Libertine Pureflex emerged on the scene 2011.  Also for 2011, The performance is pretty much the same as the lace version except it’s just easier to tighten and adjust. So far we like Rome’s speed lace but it could use stronger handles and more reinforcement around the toes. Not much has changed for 2012. The only major difference is the sole is now a one-piece lighter EVA foam sole which makes the boot lighter and a little more shock absorbent but the overall traction is less than the 2011 bindings. For 2013 the EVA/Rubber combo insole is back and a little bit improved from the 2011 and 2012 boots.

The Libertine is marketed as a soft to mid flexing boot for all mountain riding.  We found the Libertine to fit the description perfectly.  The first impression of this boot is it’s well made and very comfortable.  The Pureflex lacing system is cool looking and a lot easier to lace up than Salomon and almost as fast as the speed lacing system that many boots have.  It takes a little getting used to but once you do it’s pretty easy to lace up.  I wasn’t sure at first about the outer lace controlling the inner and outer but actually it works rather well and does save some time.  The liner is very comfortable and pretty easy on the foot.  I have high expectations because I usually ride some of the best boots out there so I wasn’t sure if they would stand up to my expectations.  I was pretty surprised with the control they had over the few boards and bindings I tried with them.  So far I have tried these boots with the Burton Co2’s, Union Force SL’s, Union Force’s, Yes Dudes and the K2 Beleiver.  The Libertine is definitely on the soft side of Medium but I was surprised with the response they gave me for this kind of flex.  The response wasn’t really exceptional and these boots wouldn’t be ideal if you are looking to ride aggressive freeride snowboards but the libertine will work. really well with any mid flexing all mountain board.  Boot’s are the toughest to recommend for different riding styles because I know so many riders that have so many preferences.  I know riders who like soft boots with stiff boards, riders who like stiff boots with soft boards etc.  I personally like to have a boot and binding that matches the board’s flex.  So for me, the Libertine was awesome with the YES The Dudes of History and it would also work very well of course with the Rome Agent Rocker or even the agent Rome Agent. Another thing worth mentioning is the sole cushioning.  It doesn’t look like it but there is a lot of shock absorption in the heel.  It’s no Burton Ion but it does a really good job. The articulating cuffs are different from Burton and many of the other companies that have articulation but it looks like it still does a pretty good job at preserving the flex. Time will tell though.   I will keep adding to this review throughout the season but so far these boots have impressed me.  I mainly ride the Burton SLX’s so I’m always impressed when I don’t have SLX withdrawals when trying boots.  There is one complaint so far and that is the toe is not as hard as it should be. It might be that I have a bad set of boots but the toe does collapse a bit on the sides however it’s not enough for it to cause a problem.

So after a few days of riding, we found a few issues:

1.  The speed lace handle is a bit small and after a hard tug, it broke.  Rome will replace it very quickly but we’d like to see some stronger handles.

2.  Another small issue is the top of the toe seems to have a crease developing where the binding goes over it.  There is no performance issue but it’s just something we don’t normally see after about 10 days of riding.

Do I still like this boot?  Yes, it’s a great boot for the price but it needs a little reinforcement in the toes and stronger handles. If it had these upgrades it would be an excellent boot.

We try to get as many images of the Rome Libertine Pureflex, but forgive us if they're not all there.