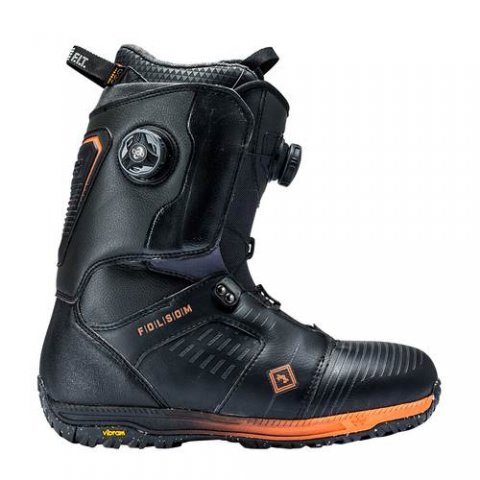 The Rome Folsom is Rome’s Stiffest boot.  It’s balanced for all mountain to freeride riding and is pretty comfortable.  The Folsom has a solid response and is great for anyone who likes to carve out their turns or for people who want a lot of support for whatever they choose to do on the mountain.

The 2014 Rome Folsom had some major upgrades. They went with Double BOA this year and they went with a BOA system that I personally like.

Comfort:   Rome makes really comfortable boots and I really liked how these fit.

Heel Hold:  There is pretty solid heel hold and I had no issues but I often don’t have issues in the heel hold world. If you do you might prefer a BOA boot that has more BOA going on around the ankle.

Flex Retention:  I don’t know how this Rome lasts but I’ve seen previous Rome boots I’ve own break down pretty quick. At about 20 days you can already see them start to break down around the ankle and in other places as well. The 2014 Rome Folsom’s shell looks better than past years but I can’t say for sure. I like the articulation in the ankle too.

Response:  The best way I can describe these boots is they are responsive but not super snappy responsive like the Burton Driver X.  They are kind of more like a boot that’s in between the Burton Imperial and Burton Driver X.  I use Burton as a reference because many at Rome came from Burton and they have a similar fit and feel.

Traction:  Pretty decent traction.  I’m not a huge fan of single molded EVA soles.  I like EVA but with a lot of solid rubber between them for better traction and longer durability.  EVA wears down quickly and also doesn’t have the traction that other boots do with rubber from heel to toe. The Folsom has enough rubber for me between the EVA and the pavement/snow/board to make me comfortable on long walks through a parking lot or a moderate hike on a pow day.

Footprint: I didn’t really get to compare it to other boots so I’m not 100% about the reduction going on here but if it’s like the older models the size is not reduced and almost a size bigger on the outside than a Burton Boot.

On & Off Ease: BOA boots are pretty easy to get off and can be pretty quick to get on 2 if you know how tight you want them.  Usually, with BOA I accidentally over tighten and find myself loosening and tightening over and over again.  So they can be almost as quick as speed lace but some times take longer.  I’ve actually seen them be super quick but then see others take longer than traditional lace when it comes to tightening them up.

All in all the Rome Folsom isn’t a bad boot for the price in its response range. It’s comfortable and feels in a lot of ways like a bulkier BOA version of a Burton boot.

The one issue we noticed  for 2010 and below is the Folsom takes a little effort to tighten up the top of the boot and the heel hold is not as tight as some boots out there.  For 2011 the Heel Hold has been fixed and many features have been revised with the liner to make the Folsom very comfortable and an all around better boot. In 2012 Rome changed the boot up again by adding an articulating ankle cuff similar to the Burton SL-X that goes almost all the way back to the spine.  This makes for a longer lasting flex and a better fit. They also added a different fit inside the liner that has memory foam so it is more comfortable and form fitting.  There is also a new one piece EVA foam sole.  It’s lighter than the 2011 and 2010 sole but not quite as durable and doesn’t have the traction.  For 2013 Rome changed the sole again to a better rubber/EVA combo that we like better. The Rome Folsom is Rome’s most responsive boot out there but it’s still not as responsive as boot’s like the Malamute or Driver X.  It has a little more flex and a more forgiving ride so it’s a little more of an all mountain ride.

We try to get as many images of the Rome Folsom, but forgive us if they're not all there.