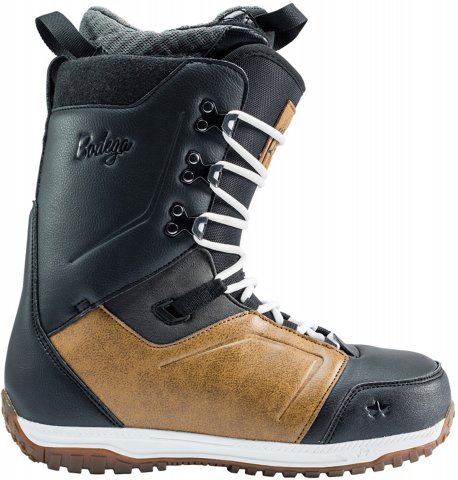 The Rome Bodega is a pretty well made traditional lace snowboard boot that is pretty comfortable.  We like that the Bodega steps up from the Rome Smith to add some articulation in the ankle to help preserve the flex.  There is also some pretty good cushioning that is similar to last years libertine and the flex is right in the middle.   All in all, it’s hard to say what boot will work and what won’t for someone so if these boots fit right then they will treat you well for a while.  Rome Boots fit very similar to Burton boots but they are a little bulkier and break down a little quicker. The 2014 Rome Bodega went back to traditional lace and dropped the pure flex option (speed lace) from the line. For the price, you get a decent amount of boot. It’s pretty much been the same boot for the last few years.

Flex:  Nice medium flex that like most Rome boots will get softer quicker over time.

Response:  Mid-level response that is forgiving but yet can power a board edge to edge if you are in the mood.

Comfort:   All Rome boots are comfortable and even the mid-level Bodega is as well. This is one place Rome does very well with their boots.

Heel Hold:  I never have heel hold issues with any Rome boots but I know that people with smaller ankles do.

Adjustability:  Same as all traditional lace boots.  With a little work and a few extra knots, you can tie up this boot to fit exactly from toe to shin.

Flex Retention:  I don’t have much time with this boot so I can’t say if Rome has improved on their flex retention and all around packing out issues. It seems better but I’m not 100% sure.

Footprint: The 2013 Rome Bodega was about 1/2 size bigger than a size 9 Burton Boot so it seems they are making some headway.

On & Off Ease: Nothing lightning quick but the same as most traditional lace boots.

All in all the Bodega reminds me of Rome’s version of the Burton Ruler.  It’s made for a little of both the park and mountain and it’s not a bad boot for the price. If they eliminated the packing/early breakdown issues and reduced the footprint this could be right there with many of the top boots in this price range because it’s one friendly boot to my feet.

We try to get as many images of the Rome Bodega, but forgive us if they're not all there.