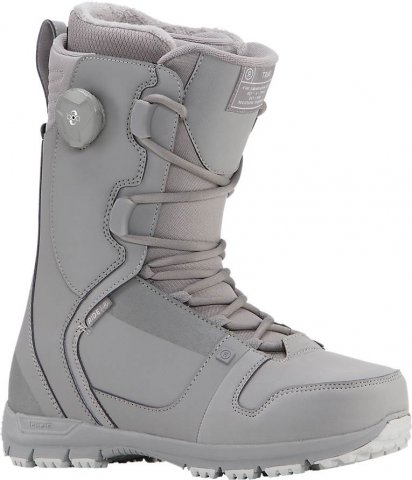 The Ride Triad offers up a hybrid lacing system that still allows the adjustability of traditional lacing like the 2013 model but adds a BOA to pull in the tongue into the boot more. This isn’t a bad idea because often times the hardest part with traditional lace boots is getting the Upper part of the boot as tight as possible.

Comfort:  Pretty comfortable to me but all feet are different like snowflakes.

Heel Hold:  The addition of the BOA this year gives you more heel hold than you would expect for a traditional lace boot. It doesn’t wrap the ankle like some K2 hybrid Lace/BOA systems but it does the Job pretty well.

Adjustability:  Love the locking rungs on the upper boot and also the ability to separate the upper and lower.  The addition of the BOA doesn’t really effect the adjustability.

Flex Retention:  Not bad flex retention. There is a little articulation going on there.

Response: Nice mid-level response for those that like a little extra flex but still like to be able to make a harder edge to edge turns.

Traction:  Not the best traction but it works well enough. The addition of the harder rubber in strategic places saves the boot from being super slippery in icy parking lots.

Footprint: All ride boots share the title of “most reduced footprint” with Burton.  Burton is only a tiny bit better at reducing heel or toe drag but it’s so close it doesn’t matter.  This is a great choice for those that are on the borders of the sizes like between a small and medium or medium and large binding.

On & Off Ease: It’s not the quickest but it’s pretty quick for traditional lace.

The Ride Triad is the traditional lace version of the Ride SPDL.  It’s comfortable, well built and fits a wide range of riders. The traditional lace design is a little different than most traditional lace boots due to the longer rungs and locks rather well.  The Triad SPDL is more appealing to us because it’s new and different but if you don’t want speed lace then the regular Triad is a good call.

We try to get as many images of the Ride Triad , but forgive us if they're not all there.