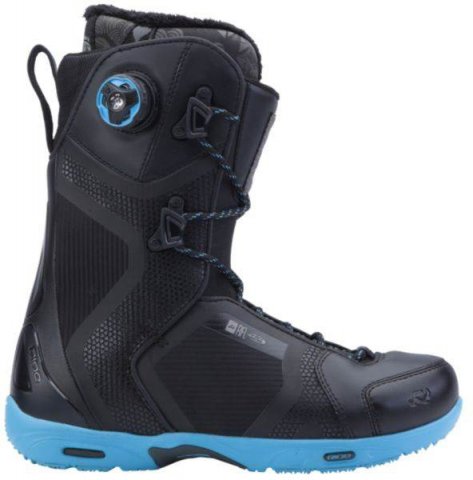 The 2014 Ride RFL went back to its sort of traditional lace lacing but also turned it into a hybrid lacing system by adding a BOA lacing system to keep the tongue in a little tighter. This is often a problem with traditional lace boots.  Even with locking rungs like this has it’s still often not as easy to tighten up the top like you can with most Speed Lacing or BOA systems. The BOA doesn’t really affect the upper and lower adjustability so you get a little more of a locked in feel without sacrificing adjustability.  Also, the RFL’s lacing system isn’t as hard as others to get on and off because it’s only 2 laces instead of 3.  Also, it’s easier to pull tight than most traditional lace boots.  There is also a very responsive boot that works well with medium to aggressive boards. It does feel light when you pick it up too.  The ankle articulation helps preserve the flex but the best thing is how reduced this footprint is. If you are between sizes like a 10.5 or a size 8 and you want to size down to fit a binding or board better Ride, along with Burton, are the best at making the boot small on the outside but fit normally on the inside. That’s huge…in a small way for an 11 rider who doesn’t want to ride a mid/wide board. All in all, this is a good hybrid boot that could make a wide variety of riders happy.

The 2013 Ride RFL is a nice upgrade from the old 2012 model. The old model was kind of a traditional lace/speed lace hybrid.  It was a great boot and to us wasn’t a bad idea until we played around with the 2013 Ride RFL SPDL.  Now we have Speed Lace that is very similar to Burton’s very reliable Speed Lace that has separate upper/lower adjustability.  There is a twist though with this boot that we love.  Let’s say you love the design but are just an old schooler or you ride 100+ days a year and have broken your speed laces? If so you can lace up the boot wtih traditional laces.  There is an extra set of loops that allows you to do both.  There isn’t any added performance with this solution but the added convienence is exceptional.  Now the RFL boot shell/liner design is almost the same from 2012 so it’s going to be the same light comfortable long lasting boot it was before.

We try to get as many images of the Ride RFL, but forgive us if they're not all there.

boots are a personal thing. Ride boots fit my feet well. I rode the FUL last year which were a great boot for the price, but these are definitely a step or 2 above. super comfy, very responsive and the boa locks that heel down well. The reduced footprint is great, the difference between these and my Rome Libertines is about an inch! I don't find them to be as stiff as Ride says.

product 0.3
4.0 4.0 1 1 boots are a personal thing. Ride boots fit my feet well. I rode the FUL last year which were a great boot for the price, but these are definitely a step or 2 above. super comfy, Ride RFL Review And Buying Advice