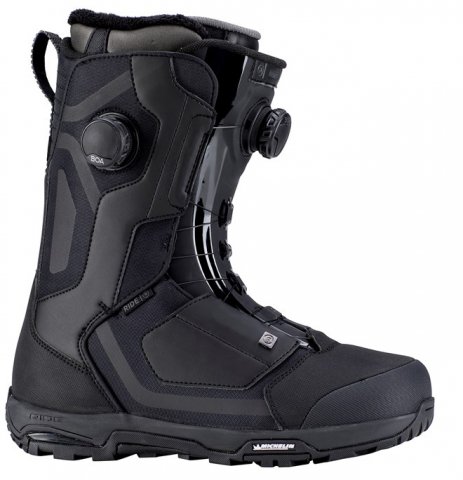 The Ride Insano BOA is a good stiff flexing responsive BOA boot. This sits in the same category to other boots like the Burton Driver X, Salomon Malamute and many other stiff boots out there.

Flex:  Very stiff and almost unmovable at first. It keeps it’s flex pretty well over time and doesn’t break down or pack out very quickly.

Response:  Like all stiff flexing boots the response is very quick to the point that it’s better to be on a harder turning board because it could make an easier turning board twitchy and put you in uncomfortable situations.

Comfort: I think that in general, most feel will be fine with this boot but I do find it a little less comfortable than some boots out there at first.  Over time it breaks in and becomes part of your feet.

Heel Hold: This double boa system really focuses on the ankle and locks that thing in.  Both BOA coilers really work it around the ankle

Adjustability:  With this great heel hold comes poor adjustability.  Don’t think that because there are 2 BOA systems in here that it’s very adjustable.  It’s just slightly better than a single BOA boot.  Both BOA coils overlap around the ankle so it’s more for zeroing in on the ankle than having separate upper and lower adjustability. For example, if you want a tight upper and a loose lower it can’t happen because the upper coil wraps around the ankle too. For some that’s good and for others it’s bad.  Just depends on what you want.

Flex Retention:  Really holds it’s flex well over time.  Yeah, all boots break down but this doesn’t break down as much as some out there.  You can easily get 100 days out of these boots without them becoming a noodle.

Shock Absorption: Not the ultra cushiest out there but really good for the amount of volume. If paired with a Ride binding like the Capo or another equally shock absorbent binding then you have a lot of protection for that awkward and hopefully occasional flat landing.

Footprint: Ride is right up there with Burton when it comes to having a very reduced footprint.  I’d say the only difference between ride and Burton is the angle of approach (off-roading term) is better with Burton but these are really reduced.

On & Off Ease: BOA systems are super fast off but can be deceptively slow putting them on. First off you have to twist the coil for a very long time to get them tight and if you over tighten you have to almost start over again. If you have these boots dialed they are only a little slower getting them on than speed lace but if you micro adjust a lot you will find yourself twisting this BOA’s a lot more than you would think.

All in all the Ride Insano is a great boot that doesn’t have as many drawbacks as it does positive attributes.  If you want to lock in that heel/ankle and want a super stiff boot then this could be a new friend.

We try to get as many images of the Ride Insano, but forgive us if they're not all there.

So I bought these boots online knowing from reviews that they were stiff! The first time I put them one I said to myself”what did I do?” These boots are so damn stiff! I own 3 pairs of Ride Boots already(Anthem,Lasso,Trident) so I knew the size 10 would fit. I was pleasantly surprised that after wearing them around the house for about a hour the boots had relaxed a bit and I had no comfort issues. I would recommend these boots to anyone that likes the Boa system and is looking for a very responsive, stiff, damp boot. You definitely want to use the Insano Boots on a stiff, aggressive board that doesn’t turn super easy. I used the Insano Boots to try to get some torsional flex out of my Rossignol super stiff Juggernaut and it definitely helped. I’m going to try the boots on my Rossignol XV next time but I’m positive it will make the board to twitchy.

The solid tongue is just a plain terrible idea. Every time you lean toe side the tongue compresses into the top of your foot and after a few days in a row it becomes unbearable. Only way to reduce is by tightening them up so tight your feet go numb. Terrible design. there is actually a small amount of articulation built into the ankle of the boot yet the tongue is completely stiff... Why? If you want a stiff boot make the boot stiff not the tongue. I have struggled with these for 2 seasons now and thought they would finally break in but after chatting to a mate who used to be a sponsored pro who also has these exact boots and also hates them, I have had enough. Anyone who thinks these are good either doesn't ride back to back days or has wooden feet. Avoid.

No problems with that tongue thingy as another reviewer states. The boot fits perfectly even with my flat feet with barely any arch and custom feet therapist insole. I tried like 5 pairs of boots before this and none if them fit me well. Thraxis for example I had way too much space in. Also there was a pressure point which felt like a boa iron cable at my right small toe, really hurting me. Could not carve AT ALL, every turn it felt like my whole foot had to tilt and pull the boot afterwards. K2 Ryker and maysis just sucked and some other randoms just did not feel locked in. Then in the store the guy told me he also had Insano in my size. I already researched it so I knew what it was. I put them on, at first felt extremely tight but they did fit well. Plus they were cheaper than the Thraxxis:)

Then he also sold me a Ride Mtnpig (160W) and he put my K2 Lien AT's on it. I went to the indoor snow slope and tested them out. AMAZING control. I could carve super fast, super locked in. Went for 3 hours, and only after 3 hours my left ankle started to hurt. But that is after 3 hours in a boot that has not been broken in yet. Very happy about it. STRONGLY recommend. I feel that these boots will last for a very long time.

Came into these boots after turning a pair Burton Moto and ThirtyTwo Lashed into noodles, so was after something with more character. The Ride Insanos did not disappoint. These are as stiff as advertised and then some. For someone like me, who rides a board that's way too big, having that extra control and power transmission was a revelation. On my last trip I ended up rolling an ankle in the apres-ski mess, but was able to ride the next day due to the massive amount of support these provide. (Don't try this at home kids). Would have gone out on the second day as well, but ankle was too big to fit in the boot, oh well.

A great feature is the footprint reduction they provide - for us yetis out there worries about toe/heel drag. That comes at the cost of some padding and these may not be the warmest boots out there, so keep that in mind.
Would not peg them as the most comfortable boots out of the box, but with a few rides they mold to your feet very well. The heel is locked-in, which is great for board response, but you can overdo it with the two BOAs - so try not to over tighten, rather adjust as needed. I've found the BOA to be very good at retaining it's hold throughout the day, so once dialed-in you're set til the last chair/line.
The Insanos are also INSANELY light, this comes into play for the larger sizes especially and was a pleasant surprise when putting them on first.
Overall - if you have big feet and want a good-looking, comfortable , very stiff and light boot, that won't completely break your bank - this is it!

I've been riding the Insanos for two seasons and absolutely love them.
Never had any hot spots or comfort issues, even riding non-stop all day and wearing them into the lodge fro a celebratory beer. Heel hold is phenomenal, response is lighting fast.
After 60+ days on the mountain they're still performing great. They size directly with your shoe size so no need to worry about ordering larger.
The dual BOA system is wonderful. My buddy has the Burton Ions, tried my Insanos and said he preferred mine to his.
The only time you'll run into discomfort is if you over tighten.
Eventually when/if these pack out I'll be buying another pair, no doubt.

Really wanted to love these..

These boots are handsome in the flesh, a really good looking boot. I so wanted to enjoy the Insanos but unfortunately they put me through hell. After two days the super solid tongue started to rub through the skin on top of both of my feet. I wear Salamon Mission socks (merino wool), and always dry my boots and socks out each night after boarding. After the 4th day I was in so much pain I had to take a day off from boarding, not ideal. My feet are quite skinny so I don't know how the average guy would cope in these any better than I did. Ride need to seriously sort the design of this boot out. Boots were sold one week after returning from my trip, I do hope that guy's feet are in one piece

product 0.3
4.0 5.0 6 6 So I bought these boots online knowing from reviews that they were stiff! The first time I put them one I said to myself”what did I do?” These boots are so damn stiff! I own 3 Ride Insano Review And Buying Advice