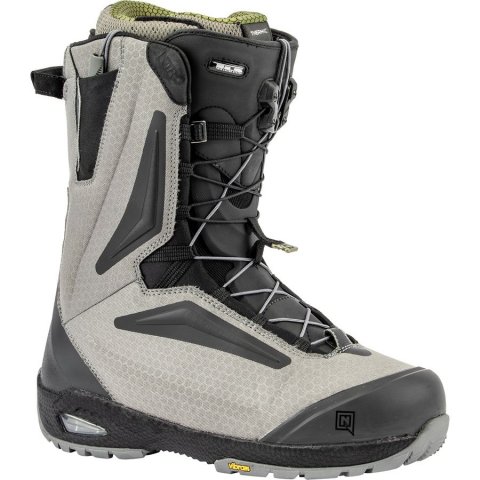 The Nitro Capital TLS has a messy lacing system but just about everything else about this boot including adjustability is really well thought out. It’s a great call for those that like adjustability, good heel hold, durability and response.

How This Review Happened:  We borrowed this for an extended demo and then returned it.  We borrowed this for a day and then returned it. We had a couple of laps at a frantic manic demo day. We liked it so much we asked to keep it (we only do this with our favorites).  After a demo, we liked it so much we bought it.  We spent our precious Good Ride dollars to buy this and review it.

Sizing/Fit/Heel Hold: The 9.5 felt a little big and the 9 would have been just right. I didn’t feel any pressure on the side of my feet but it felt like it was fitting just right for my boot width. Not sure how well it would work as you get closer to an E width.

Lacing/Adjustability: So there is good adjustability with this type of Speed Lacing and how it works with all types of feet is very well thought out and all the lacing zones make it almost as good or better than even traditional lace. The lacing position on the boot is a mess though. it gets tangled up easily and looks like Jimbo said, “it’s a plate of spaghetti” when it’s loose. Every set of Laces all sits in the same place. It would have been soo much better if each zone was put in a different place on the boot so there weren’t a bunch of tabs you pull all placed in the center. So if you can get past the messy lacing the adjustability thinks of everything from locking in your heel so it doesn’t lift to keeping the top of the boot’s tongue closed so you get more response as well as upper and lower separation. There aren’t many boots that can do it all.

Comfort:  Great liner and even the insole was well done. Even without heat molding the liner I felt the liner mold to my foot with just a little exertion on the hill.

Flex & Flex Retention:  The flex is medium stiff and there is some pretty serious tech to make the flex last for a good period of time. There is some ankle articulation, a plastic insert for reinforcement of the tongue and a really stiff reinforcement along the rear of the ankle that going all the way up the back of the boot. The same stiff plastic-like material is on the toe of the boot so it looks like it will take a long time and a lot of toe strap pressure to make that collapse. So overall it seems like it will hold up for at least one 100 day season but most likely many more.

Footprint: It’s hard to compare a 9.5 boot that is 1/2 size too big to my boots but based on the Team TLS I had in a size 9 that fits perfectly, the Footprint is on the bigger side of things. It is a very warm boot so it’s all about trade-offs. It’s just not what you get if you want to fit into a slightly narrower board and you need to make sure you are on the wider side of your width range when choosing a board.

Response/Turn Initiation:  So even though the flex of the Nitro Capital TLS is on the med/stiff side the response, all this tech built around the boot to conform to everything from your shin to toe makes this more responsive than you would think. It doesn’t feel twitchy but it could overpower a board that is easy turning.

Shock Absorption: The Nitro Capital TLS has a lot of dampness going on but it isn’t cushy soft. So it’s best for absorbing chatter at speed and giving good shock absorption for those who can go big. Slower speed shock absorption that appeals to those cushier boots is not what it is about.

Traction:  Vibram is pretty special because it has similar traction in all temps. On top of that there is a very thick amount of rubber there too so it should last a long time.

On & Off Ease: Not easy but that is the price you pay for this kind of adjustability.

So, all in all, the Nitro Capital TLS’s only real flaw is the messy lacing system but I think that everything else offered with this boot can push you past that. Especially if you like fast response, a damp ride, exceptional adjustability as well as durability.

We try to get as many images of the Nitro Capital TLS, but forgive us if they're not all there.

Note: riding the 2019 model so these problem could have been solved in the meantime.
Nitros are perfectly for my feet, so I've been riding them for a long time, but this particular one has some design failures:
- The liner has a ThermIC connector that bites right in the your shin when you're on toe edge
- The liner's velcro part where there is fabric overlap creates an annoying pressure point on the inner side, especially if you don't ride canted bindings.
- Somehow you can't really thighten the ankle holding orange plastic part when the cable is already in the locking channel
All these problems I mentioned above aren't present with the Team bindings.
And one Nitro specific thing: The articulation is good around the ankle but on the outer side between the first and the second lace loop there will always be a crease or hump.

product 0.3
3.0 3.0 1 1 Note: riding the 2019 model so these problem could have been solved in the meantime.Nitros are perfectly for my feet, so I've been riding them for a long time, but this particula Nitro Capital TLS 2020 Snowboard Boot Review