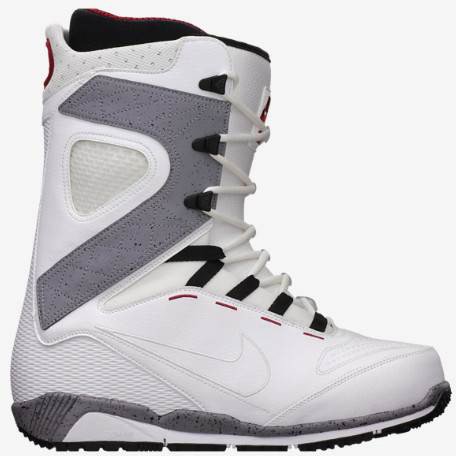 The Nike Zoom Kaiju is one of those companies that we didn’t want in the snowboard industry but now that they are here we have to say its good that they are. This is one of the better boots we have come across in a while. Speed lace or BOA might make this boot sexier but after you try it you’ll feel just as if not more satisfied.

Flex: The flex is deceiving.  It’s pretty medium to medium/stiff but the response is more than you would think for this flex.

Comfort: The liner is very similar to Burton’s where it feels very comfortable on your foot from day one. The sole of the foot is sectioned into little squares that seem to help the sole respond well to just about any angle your boot will lean-to on a binding.  It fits around your foot like a glove and the only real difference between this and many high-end Burton boots is the toe box is a little tighter. It runs a bit on the narrow side so it might not be ideal for a wide foot.   It conforms to your foot/leg as well as the top Burton boots and will handle long hours on the hill.

Heel Hold: Both Peter and I feel really locked in our heels and neither of our heels moved much or at all. The Boot just feels part of you without having to crank it down too much.

Adjustability:  The Nike Zoom Kaiju is one of those boots that you would expect a lot from at a price of $349.  Most of us at The Good Ride seem to prefer speed lace but this boot is good enough to tolerate a little extra time to deal with the traditional lace.

Flex Retention:  There is a good bit of articulation around the ankle that allows for the boot to flex better and last longer.

Response:  To us, the Kaiju has the feel and flex of the Burton Ion but the response in between the Driver X and Ion.  If you want a traditional lace alternative to the Burton Ion here you go. One of the things we initially noticed is the Nike Kaiju is incredibly responsive out of the box.  We initially paired this boot with the Rossignol Onemag Amptek and it made the board almost too easy to turn.  It reminded me (editor) of the first time I transitioned from some Ride boots that are now discontinued to the Burton Driver X.  It takes a couple of days to get used to.  In fact, these initially have very similar turn initiation to the Driver X’s.  Peter loved this feeling and said he liked these boots better than his Burton SL-X’s.  I (editor) did not agree with this but felt the overall feel and response from these boots was amazing.  After several days of riding the Kaiju starts to mellow out and the response acts more like the flex.

Traction:  Very solid traction in just about any condition.

Shock Absorption:   The sole cushioning is a pretty good balance between low profile and shock absorption. It can handle some bad landings.

Footprint: The 2013 Kaijus have a reduced footprint which is shorter in length than the DK, Zoom or Vapen and it’s pretty close to Burton in Terms of Footprint.  It’s about the same as most DC and most ThirtyTwo boots which isn’t bad at all.  It will allow you to size down a bit.

On & Off Ease: It’s really a lot better than you would think for a traditional lace. It didn’t take much longer than my speed lace and I like how Nike set’s things up.

The only complaint we had with the Nike Kaiju was that the boot did not insulate us very well.  We took this out on a day in the low 20’s and normally my feet don’t get cold but after 1 hour on the hill my toes were numb.  I changed back into my SLX’s and they warmed up again.  We have heard this complaint from other riders as well about the Kaiju.  It seems that it could be the tech to warm up the boot is lacking a bit but I think the real culprit is the tighter toe box decreases circulation and makes it colder. The only cold we felt was in the toes so maybe that is it

Often times when you take a close look at a boot you get to see little issues or defects with stitching or glue but so far we haven’t noticed any.  Even when we pulled out the liner there wasn’t anything we noticed inside the boot.  Often times you see the biggest issues in the stitching inside the boot so good job Nike.  On the bottom, you can’t see the stitches because of the heat shield but the sides look as good as we have seen in a long time.  Now back to the exterior.  The toe is very stiff and that can handle a good toe strap crank over the boot. The removable liner is very thick around the top of the ankle and provides good cushioning.  The remainder of the liner is thin to safe space.  There is a bit of a bend at the ankle when flexing that could provide a pressure point but the ankle strap of the binding alleviates this.  We’d like to see a little more of a continuous flex like the tongue.  The laces lock at the top of the lower portion so it’s just like a speed lace here.  The top lacing locks in at each rung so you have excellent upper and lower adjustability.

We try to get as many images of the Nike Zoom Kaiju, but forgive us if they're not all there.

These are comfortable all around and on the stiffer side for a medium boot. The only thing is they have terrible insulation. I rode the Nike Kaijus in Jay Peak during Feb, and my feet were freezing! If I didn't keep walking I thought I was gonna get frost bites.

Really very comfortable boots. I don't fiddle with my boots very often during the day, so the traditional lace isn't a problem. I found it easier to find that Goldilocks fit than with the Burton speed lacing or the double-boa Rides that I tried.

My favorite boots ever! Perfect med flex, not too soft, not too stiff, it's a total Goldilocks flex in my opinion. Traditional lacing takes longer than I have gotten used to with Burton's quick lace, but really allows you to dial in tightness. Build quality is top notch, and so is the durability. I wear an 11 in Nikes and it's the same footprint as my 11.5 Burton boots, so they have a little shrinkage tech going on. Really comfortable straight out of the box. Buy them, they look and feel better than what you're riding now.

This is a review for the 2012 model. Right out of the box you notice the quality of the construction as no residual glue, loose threads or anything of the sort can be found. Coming from the '10 Burton Freestyle boot, the stiffness of the Kaiju's was very pronounced and it took a while of just walking around the house in them to get used to.

Sizing wise, I find the Kaiju's to be 1/2 - 1/4 size smaller than Burtons so I had to go with a size 11 (was a 10.5 for my Freestyle) and even then my toes were right up against the toebox initially. The material does pack in a bit so right now they are just perfect. I'm also a traditional lace kind of guy so the fact it takes a bit of time to do the laces doesn't bother me at all.

Once inside the boots, one thing I noticed immediately was how low my feet were as compared to the Freestyles. I imagine Nike's vast experience in basketball footwear had a lot to do with this as the combination of Zoom Air and Free-inspired outsole worked in harmony. Traction was also superb.

In terms of actual performance, the boots perform exactly like the website's review - very responsive edge-to-edge that reigns in beautifully after properly broken in. At the same time, the initial stiff flex also dials down to its true medium flex. Since I ride in a part of the country that rarely sees sub-zero temperature, my feet stayed warm and toasty throughout 15-20 degree weather.

The only thing that doesn't work quite well for me is the overtly hard/stiff midsole. Typically Nike would pair Zoom Air with mid- to soft- midsoles in their basketball applications. However, with the Kaijus Nike has encased Zoom Air with a really hard midsole. I suspect this is to retain adequate cushioning throughout the life cycle of the boots with a decidedly lower profile. However, this setup tends to lead to greater foot fatigue and I definitely experienced this with the Kaiju's.

Overall, I find the Kaijus to be just what I'm looking for - a pair of super comfortable, high performing, mid-flex, traditional lace boots that will hopefully help me progress to the next level. Even though the cushioning may be a bit on the harsh side, it does not diminish how happy I am with them.


product 0.3
4.5 5.0 4 4 These are comfortable all around and on the stiffer side for a medium boot. The only thing is they have terrible insulation. I rode the Nike Kaijus in Jay Peak during Feb, and my f Nike Zoom Kaiju Review And Buying Advice