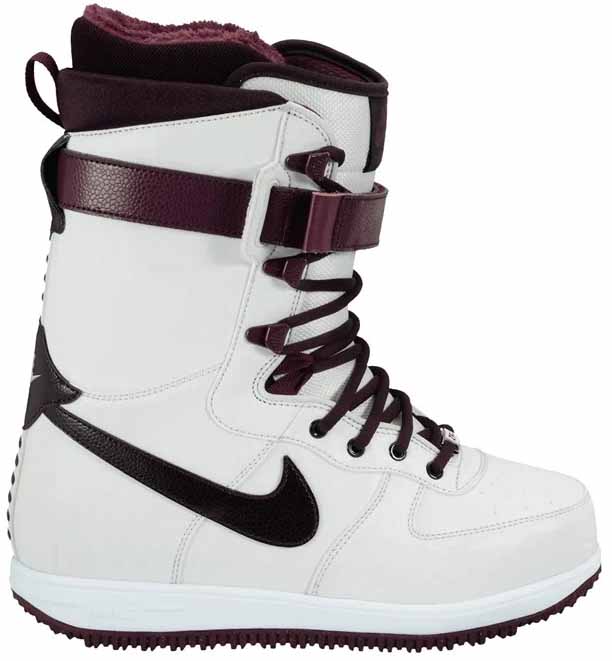 The Nike Zoom Force One is not a boot we wanted to like but we have to eat crow and say this is a very good boot.  Nike knows feet so even though they don’t know snowboarding like let’s say Burton they still make a very comfortable fit that does a good job for its price range.  The big bulky but comfortable  Zoom Force 1 is going to be here for a while.

Comfort:  Incredibly comfortable.  It will fit very well and is very comfortable.  On my first and only day, I had no issues that you normally have on a first day on a boot.

Heel Hold: Locked in my heel pretty well and it didn’t lift at all but some might want more and want the Double BOA Zoom X BOA version.

Adjustability: It’s got a way to really dial out your upper and lower in a pretty easy fashion for a traditional lace boot. The traditional laces are not sexy like speed lace or BOA but they will lock and provide excellent upper and lower adjustability. We like the little plastic lock that is attached to the top of the bottom laces. It saves time and secures the lower laces

Flex Retention:  We’d like to see articulation similar to the Nike Zoom DK because this type of design usually doesn’t hold it’s flex. That being said this boot is very stiff at first but after a bit of riding it wears down to a medium feel.

Traction:  Very good traction walking across the ice patches in the parking lot but it doesn’t seem like the best deep snow hiker.

Shock Absorption:  Lots of cush underfoot, and I like this. Those who want a

Footprint: The profile and footprint are much larger than the Kaiju but it’s warmer. There are many boots out there that are much smaller so this isn’t a top choice if you are between binding or board sizes and want to size down.

On & Off Ease: Just about as easy as it gets for traditional lacing.  This still doesn’t compete with speed lace or BOA but it’s not bad at all.

The Zoom Force is a solid boot and should be considered when if you want a stiffer ultra responsive well fitting boot.  Not much has changed from 2011 to 2012 except the addition of the warming blanket that is in the Kaiju but that is expected since this is such a new boot.  Not sure if a warming blanket is worth it since we can’t say for sure if we felt anything from it anyways. The 2013 and 2014 are almost the same as well.

We try to get as many images of the Nike Zoom Force One, but forgive us if they're not all there.

I bough These boots about month ago, I thought they were going to be super comfortable. Guess what? The are not! You cant use these boots in cold weather because your toes will freeze! Second, they are super uncomfortable. The front of the boot will smash your toes after an hour of using them. I tried to return them and they denied the return because NIKE discontinued all their snowboarding boots. DONT buy these boots. Nike does not make it anymore so they are trying to get rid of all their inventory

Not for Super Cold Weather

I have been using Burtons for a while and. although they are good, they always end up hurting something. I decided to try the nike boots. These are the most comfortable and responsive boots ever but,,,they come with a price! When the weather is below 20\'s your toes will freeze!! I tried toe warmers, super warm socks ( wool, etc etc) nothing worked!!! These boots are perfect in normal cold weather days to warm weather days only.

Nike Zoom Force 1's were perfect for me

I did a ton of background research about snowboarding boots before I purchased any. This was a good way for me to narrow my search of boots but the most important factor when it comes to buying boots is trying them on. I tried on Burton's, Salomen's, K2's, DC's, and Van's, but it wasn't until I tried on a pair of the Nike Vapens that I knew Nike was the perfect boot for my foot. After comparing the Zoom Force One's with the Vapens, it was a pretty easy choice to buy the Force Ones, the two extra straps and better sole, not too shabby on the eyes either.
Rode these boots for about a week and loved them from the first time I put them on. The inner lacing system is a little strange but after a bit of practice I have to say that it works great and is very comfy and pretty quick. I wore these around my house and once in the shower (do at your own risk), to break them in a bit before I hit the mountain.
The overall performance of the boots was exactly the quality I would expect from NIKE. Even though they have just gotten into the snowboarding game one thing that NIKE does know is Feet! These boots were super comfy all day, never got too tight, too warm, or even too cold. My feet were just very happy. The response on these boots is somewhere in the middle on a scale of 1-10 I would put it at a 5-6. The two extra straps on the inner lacing system and top of the boots ensure that your ankle/foot aren't going anywhere but the bottom of the boot. Cannot stress how comfy these were. After I got done with the day sometimes I would just walk around in em.
Sizing: I normally wear a 10 in casual shoes, the 9 was very tight, the 9.5 was snug, 10 was a bit loose. Remember: your boots are going to break in and you will get about a 1/2 size in most boots after you break them in.
Overall: Great boots for me, but everyones foot is different and I have been wearing nike shoes for awhile and maybe my foot got used to nike shoes/soles. Most important thing about snowboarding boots = HOW THEY FEEL TO YOU

product 0.3
3.0 5.0 3 3 I bough These boots about month ago, I thought they were going to be super comfortable. Guess what? The are not! You cant use these boots in cold weather because your toes will fr Nike Zoom Force One Review And Buying Advice