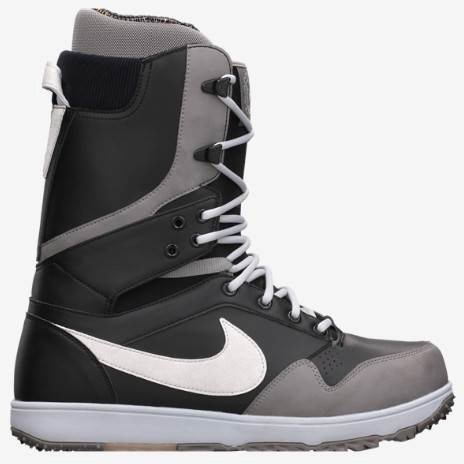 The Nike Zoom DK is a lot like the Nike Zoom Force 1 but it has a little higher tech like the articulation at the ankle that preserves the life of the flex like the Kaiju has.

Comfort:   Nike paid some serious attention to how to fit a snowboard boot around a foot before jumping in the market and do a better job than many boot companies that have been around for a while.

Heel Hold:  The Nike boot wraps around the foot really well and seems to do a great job for me in holding my heel in.  That being said it’s traditional lace and some people aren’t satisfied unless they can crank a boot down super tight around their heel.  For those BOA boots will only work. However, most should be more than fine with these boots.

Adjustability:  Love the adjustability with these traditional lacing system boots. The 2 rungs at the top locks in and the middle have a good way to secure the middle.  There is a nice separation between upper and lower lacing if you want it.

Flex Retention:  There is a lot of ankle articulation so it looks like it will hold it’s flex really well.  No boot stays the same as day 1 but this doesn’t ever really noodle out.  I know a few people who have owned these for more than 100 days and they still have a decent flex going on.

Response:  Pretty responsive but not over the top.  When everything is tightened up you can get a lot going on edge to edge.

Footprint: This is the only real bummer with Nike.  The footprint is just not reduced and pretty big compared to other boots in the industry. If you run in between the board and binding sizes these might not be right for you.

We try to get as many images of the Nike Zoom DK, but forgive us if they're not all there.

Yep these are the business. Wasnt sure about Nike for Snowboarding but you know what these guys make good stuff. Im a 10.5 in a Burton but 11 in these. Heard they are thin but im pretty wide in my feet and no drama. Little bit of mucking around at first to get them on and off but on the whole well good boots bro!

product 0.3
4.0 4.0 1 1 Yep these are the business. Wasnt sure about Nike for Snowboarding but you know what these guys make good stuff. Im a 10.5 in a Burton but 11 in these. Heard they are thin but im p Nike Zoom DK Review And Buying Advice