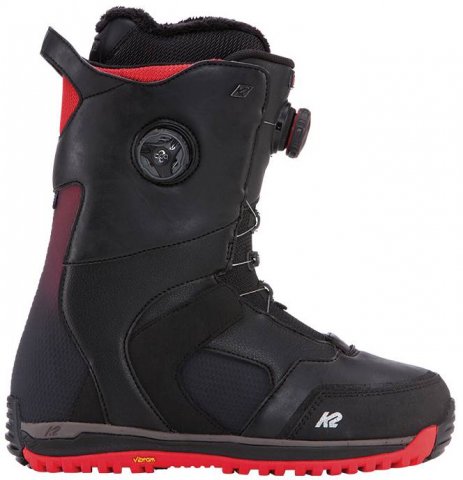 The K2 Thraxis is K2′s super high-end boot that offers the most in heel lift suppression. It does it with some sacrifice to adjustability but it’s one responsive Tripple BOA boot.  Yep 3 BOA Coils.  One for the upper along with some of the ankle, one for the lower and one for the liner.

Flex:  This is a pretty stiff boot and it’s right up there with any other stiff boot in the industry.

Comfort:  K2 makes big bulky but comfortable boots. They are super comfortable and are right there at the top when it comes to making your foot feel at home in a new boot. Unlike some BOA boots, K2 makes a very dense liner to shield you from the pressure points a boa lacing system can cause if you tighten it up really tight. The drawback of this is the footprint is hard to reduce as some other companies do. The Thraxis has 1 BOA for the liner, 1 BOA for the upper and 1 BOA for the lower.  Heat moldable liners really make a difference so that is a nice bonus.

Heel Hold:  If you are worried about heel hold then the K2 Thraxis will lock in even a smaller heel/ankle and keep you secure. It starts with the BOA system in the liner and then goes to the double boa system that overlaps on the ankle on the outside.  There aren’t many boots that can lock you in like this.

Flex Retention:  The K2 Thraxis doesn’t have much ankle articulation going on to retain the flex but they do have their own unique tech that does just as good or better.  They have put a urethane material throughout the spine that works about halfway through the boot that retains it flexes the same on day 100 as it does with day 1.  The front part of the boot will break down like all boots and it will pack out a bit but the overall flex will hang in there for a long time.

Response:  Very quick and responsive and you would expect this for the Thraxis Flex.

Traction:  No complaints here.  Vibram is just badass and works well anywhere from the parking lot to a rocky frozen peak.

Shock Absorption:  K2’s harsh/mellow dampening system is a great system and it can handle a flat landing for sure. It’s a nice cushy feel when it comes to a day in day out riding and with the Thraxis you feel like your foot is very well protected.

So if you are all about heel hold and response and don’t care too much about having a reduced footprint then the K2 Thraxis could work well for you.

The 2011 and 2012 K2 Thraxis are pretty similar barring a few minor adjustments and both are great boots….especially for their time.

The 2013 K2 Thraxis has one big change to the build that makes this a much better boot.  The addition of Urethane throughout most of the boots frame is a great idea. It’s a smart approach to dealing with preservation of the flex.  It’s like having a lot of ankle articulation. This is for sure the call over the older models

We try to get as many images of the K2 Thraxis, but forgive us if they're not all there.

This boot is a beast

Not sure these guys actually rode this boot? Or even tried to put it in a binding?

I disagree on two major points. First, the footprint is not bulky. At all! It is on par with Burton's reduced size. I have a ten in this and it easily fits in Burton and Now medium bindings.

Second, the boa is much more separated than they would have you believe. There is no actual overlap at all between the upper and lower cables. Perhaps what they are referring to is that both sections have an effect on your ankle because of how stiff the tongue is. But I find the adjustability to be great.

Other thoughts: the flex on the boot is amazing. It is as stiff as you want it to be, but that lets you run it without cranking everything down, so you foot feels great. Also, for me the shape is perfect. Carving or flexing the boot hard it distributes pressure very evenly and creates zero pressure points. Like they say though, try on literally EVERY boot you can, and really try to flex them hard in the shop, because those pressure points or lack thereof are totally dependent on your foot/ankle/leg shape.

Sizing seems true to the other boots I've ridden (most recently a few Burtons, I am a ten in those as well.) Of course though be sure to try on a wide range of sizes. Remember you should be sizing down from normal sneaker size.

One note if you're trying this on: The inner boa has a moveable plate that velcros to the shell and adjusts where the pressure is applied for heel hold. Moving this makes a huge difference. Even just a few millimeters. If you feel instep pressure try moving that up.

Finally, as is usual the stock insoles are completely worthless. I put the sole performance thin in mine. Great arch support, they take up a bit of heel volume but pretty much leave the toe box alone. K2 have a lot of room in the heel so it is good to suck some of that up.

From hate to love

I ride these boots now for the second year.....They really fit my foot perfect but I did hate the inside tongue witch supposed to be for the perfect heel hold! Don´t get me wrong....nothing against heel hold but you wrap this green tongue around your feet with steelcabels witch are running trough hardplastik tupes ! So guess what happens when you crank that System to get the promised heelhod....
Yes, pressure points that you never had before...
So this is really unacceptable and stupid ingeniering from K2 ! So when I bought these boots I ended up cutting out that system of the boots directly in my Hotel room after a day of bad pain and testing all possible setups to avoid these pressure points. From there on it was really a perfect feeling !
I never had problems again with these stiff killers....The boot worked perfect and for me even much better without the tongue thight system.

product 0.3
4.5 5.0 2 2 Not sure these guys actually rode this boot? Or even tried to put it in a binding?I disagree on two major points. First, the footprint is not bulky. At all! It is on par with B K2 Thraxis Review And Buying Advice