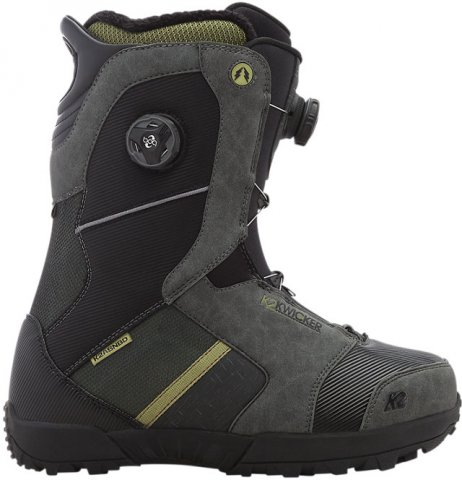 The K2 Stark is new this year and it’s made for their new click in system called Qwiker.  It’s not for traditional bindings but instead, you need to buy their Kwicker binding. The Stark is big and bulky looking but at least you don’t have much going on in the bindings. I’m personally surprised to see this system come back because the older click in system that people used in the long long ago did not work that well in terms of performance. This seemed to work fine for us but we liked K2’s traditional strap bindings and boots much better.  It’s hard to say get this system but if you are an old schooler who loved the click in system and don’t really care about the response or any of the modern improvements in binding/boot performance this might be for you. I guess I just have to realize that some people prefer the ease of access more than performance and some have medical issues that this could make snowboarding easier for them. I wish K2 would dedicate more creative energy into making their traditional strap bindings better instead of developing Cinch, Auto and now Kwicker tech. Oh well at least this is mainly for backcountry use and K2 doesn’t seem to have plans to push this across their line of boots and bindings….fingers crossed.

We try to get as many images of the K2 Stark, but forgive us if they're not all there.