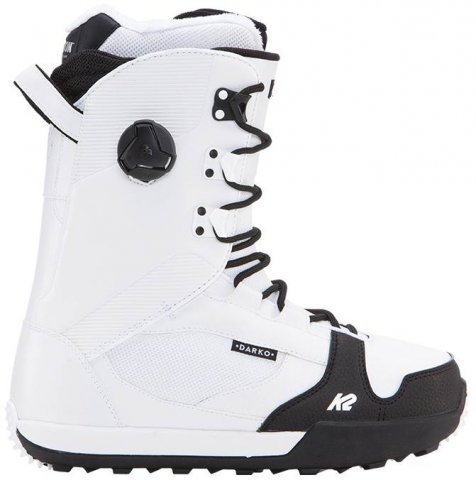 The K2 Darko has been around for a while and is a popular boot in K2’s line. This is like a softer version of the K2 T1 for those that want a little more freedom and a more mellow response. 2015 has a different sole and a few little tweaks that make it more comfortable but both the 2014 and 2015 are good boots.

Reduced Footprint: K2 is bulky and bigger than most boots and it runs on the bigger side of the spectrum.

Flex:  Very middle ground flex that is a nice balance between support and freedom to move a bit.

Adjustability:  We like the lacing for the shell because it allows you to adjust the top and bottom of the boot differently which to many is very important.

Flex Retention:  The Darko boot doesn’t have Endo construction which does an amazing job retaining its flex but it does offer up pretty good flex retention for not having it. It can work for a 100 day a year rider but it’s not in the same world as the Endo construction boots.

Response:  Not like the stiffer K2 boots but it does have some decent response that can work with most boards out there.

Traction:  good traction that can help most riders not slip.

Shock Absorption:  Harshmellow tech is pretty good and it offers up a nice balance of feel and protection.  It’s kind of in between a skate shoe and a super soft cushy snowboard boot.

All in all, this is a good boot and if you don’t need or care about reduced footprint tech then this could make you happy.

The K2 Darko has had many variations of lacing systems over the years. They had a lace system for 2010, an inner/outer BOA system in 2011 and for 2012 a BOA on the inside Lace on the outside system which is unique. For us the 2012 is definitely the call because of the added adjustability but it’s all personal preference.

All the Darko boots from all years are both incredibly comfortable and have good shock absorption.  Some but not all of us at The Good Ride don’t like a BOA in a liner because it means you are getting wire closer to your feet and possibly causing pressure points over time.  It’s more paranoia than any actual issues because we don’t ride most boots 100+ days and no one has reported this yet.  There is also have some articulation at the ankle to help the boot retain its flex longer. Despite it’s weird Lace/Inner BOA Design the Darko is well built, comfortable and supportive for it’s price range. K2 knows how to build a comfortable boot around your feet.

We try to get as many images of the K2 Darko, but forgive us if they're not all there.