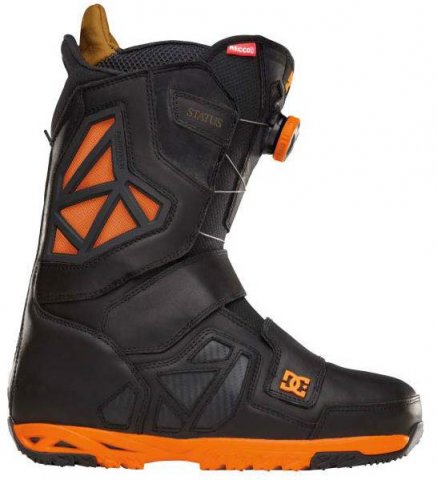 A great Super expensive boot for the ultra-technical backcountry rider or ultra-rich.  The DC Status is for the very aggressive and loaded with DC’s high-end tech.  It is here to compete with the Burton Driver X and others high end stiff/responsive boots like it. Most DC boots have a very flexy forward lean but these don’t.  They have a pretty stiff forward lean. DC hasn’t perfected the very difficult art of making a boot comfortable right out of the box but over time you can make the Status conform to your feet.

The DC Status is the stiffest boot in DC’s Line and doesn’t act like many of the other boots. The articulating cuff also helps a little with the longevity of flex it won’t deteriorate too much over a season of riding. Another thing we like about this Double Boa system is the boots have true upper and lower adjustability  Many BOA boots have cables that share the same midpoint around the ankle.  So if you tighten the upper or lower the ankle tightens as well. With the DC Status, this doesn’t happen.  This is long overdue for the BOA system and we are glad DC figured this out.  Now BOA has the same adjustability as speed lace.

We have ridden boots that are more responsive with a softer flex and we have encountered stiffer boots as well. Still, this sits in the place with the stiffer and more responsive world of boots.   There are some boots that take some time to break in to become comfortable and others that feel broken in from day one. The DC status takes some time to adjust to the shape of your foot so you might want to keep your old boots around if you have sensitive feet. All agreed that they weren’t that comfortable from the start but some didn’t care because they were so stoked on the response.   The biggest issue was the inside liner was almost as stiff as the outside. The sole looks like it’s going to be incredibly comfortable and shock absorbent but it’s not exactly what it seems. The somewhat thick sole actually has a very stiff feel to improve response and absorb shock on large maneuvers. It is not that forgiving on the little bumps but it’ not chattery. Its actually very damp but it doesn’t give you a lot of minor shock absorption like some boots do. You feel more like you are directly connected to the board.  This is a great combo with a stiff aggressive board. For me the editor, it was too tight and narrow around the heel and a little loose around the ankle but the turn initiation was exceptional. DC has a great shell but as of late, their liners have not been on par with their shell as of late.  It can make for a ride that isn’t as comfortable as some boots out there.  We didn’t have time to break them in but felt they would be better after a few weeks of riding. So you sacrifice a lot of initial comfort for performance with this boot but it will make many aggressive riding stiff boot loving people happy.  All in all, this is a great boot and one we would like to add to our quiver. For 2012 not much has changed except for a few minor refinements.

We try to get as many images of the DC Status, but forgive us if they're not all there.

I can only compare these to my old 2011 F22s, which were a great boot. I wanted a dual zone BOA boot that was as stiff or stiffer than the F22. I ended up with this boot and really like it. When I want I can crank that BOA upper zone and get super support or if I'm just playing around loosen the upper zone up a bit for better comfort. I don't know if it's this boot or the BOA lacing system but it's possible to get these boots to tight/stiff. The lower zone is completely separate from the upper zone so you have true lower/upper adjust ability. I tighten the lower zone just enough to keep the heels planted. Speaking of heels these boots have excellent heel hold and it's obvious they would by looking at the strap system in the lower zone. Sizing was dead on to the foot measuring device used in stores. TIP- my toes were just a hair crunched against the front of the boot when I put them on but after walking on the treadmill to warm them up and kicking a tire they packed out perfectly. I put in new insoles from the beginning, for better arch support but you have to do this with any boot I'm told. I've never had a sore spot, pinch point, or any other issue since the first day I wore them on the slopes. I did about 3 hours of break in time on the tread mill and wore them around the house a couple times for about an hour. The one problem I have with these boots are traction compared to my F22s. IT's horrible. I really have to be careful walking in the ice/snow. If you're looking for a true dual zone BOA with excellent heel hold and support this is one to check out.