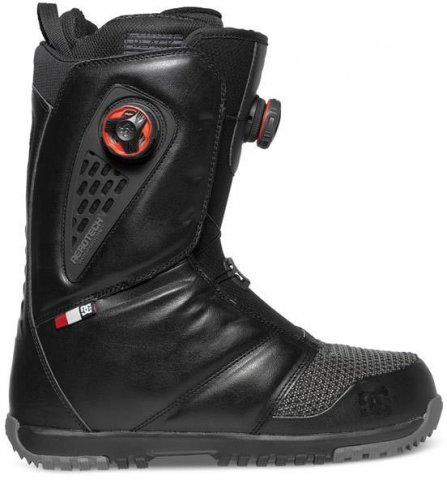 The DC Judge has evolved from a single BOA to a Double BOA over the years and might be one of the most popular BOA boots out there.   They are known for being a Double BOA boot that has excellent heel hold as well as complete separation when it comes to upper and lower BOA lacing.  Most don’t.

The back panel of the liner has what looks like well, let us just say two very grippy bumps that seem to wrap around your Achilles tendon and trap your ankle from rising.  Some might even complain that it is too hard on the Achilles until they are broken in.  It can make for a ride that isn’t as comfortable as some boots out there right out of the gate.  Still, the DC Judge is one of the better BOA Boots out there when it’s broken in. The upgrade to the 2012 BOA system is well thought out and now on par with their top of the line DC Status which makes for much better upper and lower adjustment.  Both the upper and lower are completely separate now when it comes to adjusting so it’s almost like a Speed Lace boot. This is great and the 2013 has this as well.  Also, the new lacing system has fewer pressure points making this one of the better mid flexing double boa boots out there.  So spend the money on the 2012 or 2013 boot if better adjustability and comfort is important to you. To us the 2013 felt more comfortable out of the box but that might of just been a problem in our heads with the 2012. The 2014 isn’t that much different from the 2013 model except it has better ventilation and an all around better feel.

We try to get as many images of the DC Judge, but forgive us if they're not all there.

Broke in backcountry riding after only using 6 times. The boa housing and boa broke. Small plastic pieces that hold the boa to the boot. DC would not warranty, and the boa does not cover the housing the boa dial sits in. Lots of money right down the drain.

More a 2.5 stars than a 3 really.
I had the 2013 model of these and put about 100 days on them. I really should have replaced them after about 50.
Straight out the box they were killer, even more responsive than I was expecting and I was over correcting pretty hard for the first day. They stayed sweet for a few weeks but softened up pretty quickly. Mine didn't really pack out heaps and I was able to tighten up properly until the end, but they would flatten out around your foot as you flexed them.
The build was pretty good as they only started to fall apart right at the end, the colored sections of the soles needed gluing and some smaller bits of stitching started to break. The quality control might be a bit off though, the two boots have some minor shape differences between them.
Grip was probably about normal for this type of sole. Nothing great but a little better than the soft molded soles like on 32 boots.
I put probably a dozen days of decent backcountry hiking on these so that probably shortens the life a bit, but I still think they are worse than most boots.
I'm a mid wide size 12 and these fit perfectly. they were always comfortable to ride in and to walk/hike in too.
They turn up cheap quite often and the new models might hold flex longer so I nearly bought again but went for the Ride Lasso instead. If you only ride a few weeks a year these are probably a good choice.

Entry and Exit: The first 10 days on these boots were miserable to get in and out of. There was plenty of hopping on one foot and stomping the boots on, even more kicking and prying to get them off. After about a year's worth of riding, its significantly easier to get in and out.

Fit: I've worn plenty of DC Shoes for skating and fit just like their shoes. I've got wide feet, and that was the main reason I had a preference for these.

Tightness and Stiffness: The tightness of the boas were decent. I preferred to CRANK them down to get the tightness I like. Stiffness It felt great initially, but I broke it in and time went by, it feels more and more floppy everyday out. Cranking down the boas down helps a little, but there's only so much they can do as it flexes at the ankle.

Traction: Works within reason, like most other boots as far as I'm concerned.

Heel Hold: I get lift, which is not too much of a big deal at all. It only notice it while carving on rougher terrain.

Overall: The stiffness appeal and the fit of DC shoes is what brought me to these. If I paid MSRP instead of the 208 I paid, I probably wouldn't have bought these.

Despite a few positives, the DC Judge is overall a poor boot. The sides of the boot (holding the boa laces in place) came apart after just 15 days on the snow; apparently only held together with thin string attached to a permeable material. A poorly constructed boot that certainly doesn't deserve AUD320. Sad to say good bye to DC.

I bought these boot because the dual BOA. These are my first boots from DC shoes, and likely my last.

After 5-6 moderate uses, the books are showing significant wear and tear. The right toe panel on the left boot fell off partially then completely. The right rubber heel cup is separating from the back of the boot. Rubber has worn off completely along the calf seam. Their construction does not seem up to par with the rest of the industry.

I've never had a set of boots fall apart so quickly. I've been snowboarding 15+ years, using Burton, 32, and Vans boots. I contacted DC shoes with photos of the early wearing, and they were unwilling to send a replacement pair. So, a D- for customer service as well.

The only reason I bought the 2015 boots cause in person they look so dam cool... just fell in love with there looks and always wanted to try to use double boa.. cause im so lazy I love the idea of boa,, the only boa ive tried was 32 Brand.. and I hated them.. so I was reluctant to ever try boa again... anyways only boots ive ever really loved are the Nike Kaiju.. my atf and Nike Danny kass boots... for some reason only nike fits my foot the best.. so I tried the red color dc 2015 judge... and to me I think I board just as equal to them as my ATF nike Kaiju... even though they seam a more relaxed on the lateral movement.. the toe to edge response I think is better for me than the nike Kaijuu... I think if I could get these in laces id really want the more so than boa.. something about the non giving motion of steel cabels I don't like... I grew up placing Ice Hockey. and I like to crank down really tight.. laces seem to me to have a more comfortable fit than boa.. so for me I now board with two pairs of boots.. Nike Kaiju and the 2015 Judge.. for performance.. I crank the boas down hard and do my run.. the second I get down the run I release the boa.. but on lazy days when I just want to tie my boots and just want comfort all day.. I never found anything better than the nike kajiu.. Nike kaiju is like what George forum says when he sells his Grill. "Set it and forget it.. DC judge Kicks but but for me not a set it and forget boot... you got to Krank it.. Kick ass than quickly release the boa when your done your run... but Id say definitely equal if not better in toe to heel response to nike Kaiju but not as responsive in lateral left to right lateral movements.. I like both pairs of boots and will keep both pairs.. I have have use for both.

Absolutely loved them at first! Be aware though, their flex rating drops at least 2 after 10 days of riding and 2 more from there. I put only 35 days in on them and they felt like socks. They will be good for a season if you only go up 20-40 days. If your seasons are long, get something more resilient.

Good flex out the box, but they died quickly- after 20 days they were DONE. To the point that they were like carpet slippers with massive permanent creases where the ankle articulates so had to replace them.
Packed in massively- started off with about 3cm of cable eitherside of the knob leading into the boot. after 3 weeks packed in so much that the boot sides actually butted straight against the Boa knob.
Also the boa cable routing is a nice big plastic pipe/cable housing that goes right across the back of the heel so digs into the heel bone when your cranking over to toe-edge. Also routes straight across outside of ankle bone and actually gave me a bit of a spur after just the 20 days.
Also the aerotech venting doesnt vent- it just lets in snow and makes your feet wet.
These were my 5th pair of judges and probably the worse yet.
The 2010+11 were best, but with the 2012+13 where they switched to the side -wrap-over style lover closure, were massively stiif out the box and then softened nicely and were pretty comfy. So I was looking forward to the up-the-middle boa deal like the 2010+11s had, but nope- these were rubbish. Get Salomon synapse boas instead- MUCH better, but get them half siz smaller than these.

Bought these and only got to ride them one time before spending a week in Colorado. Probably needed a little more break in before a trip like that (wore the skin off my front ankle from a pinch) but the results are totally worth the pain. Held on like a clingy woman and allowed no heel lift at all even toe side in Prima Cornice. Starting to stomp out nicely now and feel like they will be part of the family for years to come. Buy them half to a whole size bigger than you think and crank them down again up top before you drop!

product 0.3
2.7 5.0 11 11 Broke in backcountry riding after only using 6 times. The boa housing and boa broke. Small plastic pieces that hold the boa to the boot. DC would not warranty, and the boa does no DC Judge Review And Buying Advice
Page:
12