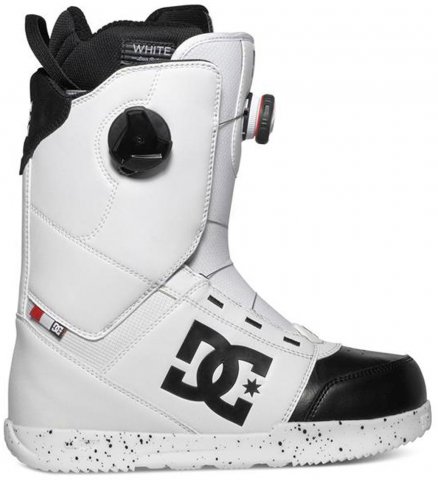 The DC Control BOA is a unique Double BOA in the industry right now. It’s one of the only Double BOA boots that have completely upper and lower separation.  Most overlap around the ankle. The Judge used to be like this but the BOA was changed to Focus BOA that overlaps on the ankle.

Turn Initiation:  Good enough for the park and good enough to rail a hard turn on a moderate flexing board.

Comfort:  DC can take a little time to break in but after that, they are pretty comfortable.

Heel Hold:  Now these don’t have the grip around the ankle that many BOA boots do but for me, it was more than fine.  If you are all about cranking it down around your ankle then these aren’t the ones.  Go with the Judges.

Adjustability:  Outstanding adjustability for BOA boots.  Upper and lower is completely separate.  This is what makes this boot soo different compared to so many of the other BOA boots out there. If you like BOA but want the adjustability of Speed Lace then this is one of your only options out there with this flex.  The only other competitor is the Burton Concord.

Flex Retention:  This holds it’s flex pretty well and an articulating cuff is a great tool for preserving the flex.  Still, it’s not a boot that’s going to last forever and you will not have the same flex 40 days later.

Traction:  This is my biggest issue here with the boot.  It’s got that single mold EVA sole.  It’s lighter and cheaper for companies to produce but you replace rubber that wears slower and has much better traction with foam.  It’s fine in soft snow but walking around in icy parking lot’s is pretty sketchy.  it also wears down a lot faster than most rubber soles.

Footprint: DC isn’t the best but they do a good job at making the footprint smaller than many boots out there.

On & Off Ease: BOA is slow going to get dialed out and get on but it’s really fast getting it off.

All in all the adjustability of the boot is really unique and if you can live with the single mold EVA sole then this could work as a good boot for a wide variety of boards.

We try to get as many images of the DC Control, but forgive us if they're not all there.